Are the next hot neighborhoods East New York, Flushing West and Cromwell-Jerome? The de Blasio administration hopes so.

Carl Weisbrod, the direct of the Department of City Planning, testified at a City Council hearing today that the three areas will all be targeted for Mayor Bill de Blasio’s ambitious housing plan, which seeks to develop and preserve 200,000 units of affordable housing.

“To fulfill this ambitious goal, the Department of City Planning … will commence planning studies in neighborhoods in all five boroughs, in locations where we believe the potential exists to create new capacity mixed-income housing,” Mr. Weisbrod testified at a hearing, long postponed, on the mayor’s affordable housing plan.

He noted that in September, DCP launched a study, in partnership with Council members Vanessa Gibson and Fernando Cabrera, of the area surrounding Cromwell and Jerome Avenues in the Bronx. The 57-block alley, chock full of parking lots, auto shops and self-storage facilities, would be rezoned for residential and retail development.

Mr. Weisbrod also announced at the hearing that a similar study will be launched of Flushing West, an area to the west of booming downtown Flushing, Queens. The less developed area also includes public housing and will be studied in partnership with Councilman Peter Koo, the neighborhood’s representative, Mr. Weisbrod said. It’s an area “many advocacy groups and other community stakeholders have been active in for some time,” he said, not offering any details from his testimony about the development.

East New York, a transit-rich, low-income neighborhood in eastern Brooklyn, is one place the de Blasio administration hopes to transform into a vibrant, more affordable version of areas like Downtown Brooklyn and Williamsburg. Mr. Weisbrod said the administration has been meeting with local elected officials and the Cypress Hills Local Development Corporation to develop a “framework for growth.”

Mr. Weisbord said “thousands” of units of new mixed-income and affordable housing–he didn’t say how many units exactly–would be built in the far-flung neighborhood, along with “much needed retail, jobs and services.” Density will also be coming to the area, he said.

“Stakeholders recognize the need for this density to achieve all of the community’s objectives including affordable housing,” Mr. Weisbrod said. “And the Department [of City Planning] understands the city’s obligation to produce the timely infrastructure and services increase density requires.”

The city’s affordable housing plan has not always pleased Mr. de Blasio’s progressive base. Some advocates slammed the Astoria Cove development in Queens for not including enough affordable units while others have questioned whether the mayor is fudging numbers by taking credit for projects begun under his predecessor, Michael Bloomberg.

Council Speaker Melissa Mark-Viverito, a close ally of Mr. de Blasio’s, expressed concern at the hearing today that the plan would focus too much on building at the expense of preserving existing affordable housing stock, potentially ushering in another round of gentrification across the city.

“The idea of bringing on any new units that could add to the pressure of an already delicate situation, I’m wary of,” she said. 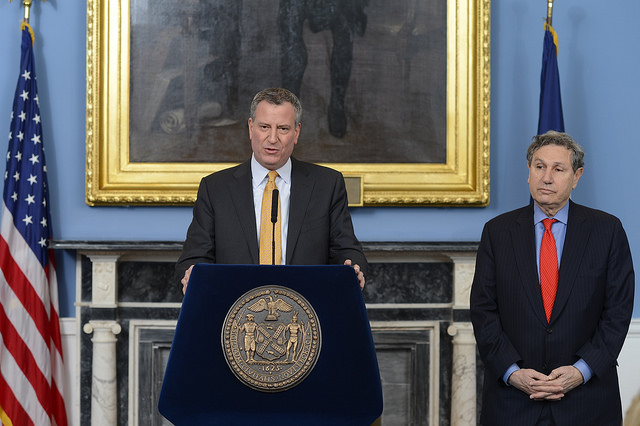