Mayor Bill de Blasio has often criticized Police Commissioner Ray Kelly’s leadership of the NYPD, but he had nothing but praise for the former top cop when the two crossed paths at the Veterans Day Parade today.

Mr. de Blasio and Mr. Kelly — a veteran of the U.S. Marines who was the parade’s grand marshal — greeted one another toward the end of the route and had a brief conversation. Mr. Kelly also exchanged a warm greeting with Police Commissioner Bill Bratton.

The mayor noted his former boss, Mayor David Dinkins — who was also Mr. Kelly’s boss during his first tour as commissioner — was also a Marine.

“It’s a very, very rich culture of loyalty and service — so we were jsut talking about that. We were talking about the huge presence of Marines today. It meant a lot to him that there were so many Marines,” Mr. de Blasio said.

“It’s gratifying. It’s a lot of fun — Veterans Day is a day when we remember those that we lost, but we also should celebrate people in the military now,” Mr. Kelly said.

And he wasn’t in the mood to talk police policy. Mr. Kelly would not comment on the announcement yesterday that the NYPD will no longer make arrests for the possession of small quantities of marijuana.

“We’re not gonna be talking about that today,” Mr. Kelly said.

Mr. de Blasio, meanwhile, promised earlier in the day to end homelessness among veterans in the city and after the parade spoke about his own father’s struggle after World War II, in which he lost part of his leg during the Battle of Okinawa.

“Later, I understood that it was a huge emotional toll that literally stayed with him his whole life, and it affected the whole family. So, one of the things we’re trying to do here at the city level is address these issues for all veterans — they haven’t been addressed efficiently federally, it’s quite obvious,” he said. 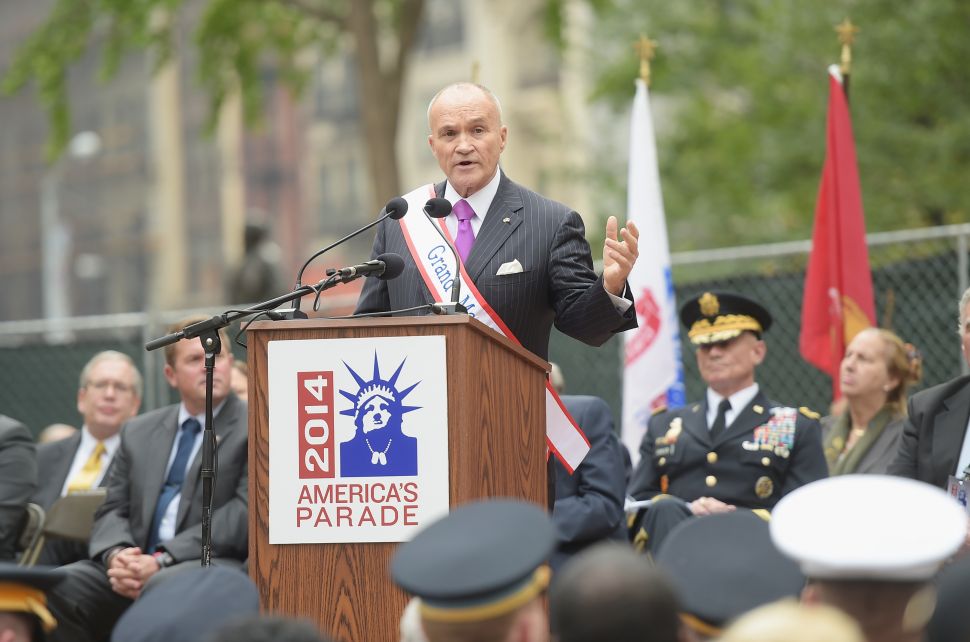