Mayor Bill de Blasio told a Brooklyn audience last night that East Side restaurants refused to serve employees of Bellevue Hospital while the medical center was caring for the Ebola-infected Dr. Craig Spencer–and that one nurse even had a daycare center decline to take care of her child during the panicked period.

Speaking in Dyker Heights at the annual dinner of the Sansone Foundation–which funds scholarships to colleges and parochial schools–Mr. de Blasio described how eateries refused to wait on Bellevue nurses while Dr. Spencer was in the hospital’s care. Mr. Spencer contracted the organ-liquefying disease while working with victims in West Africa, and was diagnosed himself shortly after his return last month.

The mayor noted that the staffers who reported such treatment were not those seeing to Mr. Spencer’s recovery.

“They just worked at Bellevue. That was enough for some people to want to have nothing to do with them,” he said. “So we saw some of the worst of it, the side we’re still working on as human beings, we saw the fear, we saw the prejudice.”

Mr. de Blasio contrasted such behavior with what he described as the solidarity and courage of the employees of Bellevue, which belongs to the city’s network of public hospitals. He recalled that, in spite of the stigma, the workers swarmed to the ill doctor’s aid.

“The people at Bellevue, that worked there, volunteered to help Dr. Spencer. They lined up to help Dr. Spencer. They wanted to help this hero who had gone to help all of us,” he said. “The people who worked at Bellevue thought it was their moral obligation to serve him. And they went toward the potential danger. And people closed ranks and they did everything they could to make him well, and they succeeded.”

The speech marked one of Mr. de Blasio’s rare visits to one of Brooklyn’s more conservative southern enclaves. But he came to recognize 98-year-old borough Democratic stalwart Mary Sansone, who began her political life as an organizer for the radical union the Industrial Workers of the World–and later became an ally and confidante of New York leaders ranging from former Mayor John Lindsay to former Gov. Mario Cuomo to former Mayor Rudolph Giuliani. Mr. de Blasio compared Ms. Sansone’s life’s work–which consisted largely of running social centers for the poor through the Congress of Italian-American Organizations–to the commitment shown at Bellevue Hospital during the Ebola panic.

“That is the side of humanity that is celebrated, that we aspire to emulate. And that is what Mary Sansone has been teaching us all these years,” Mr. de Blasio said. 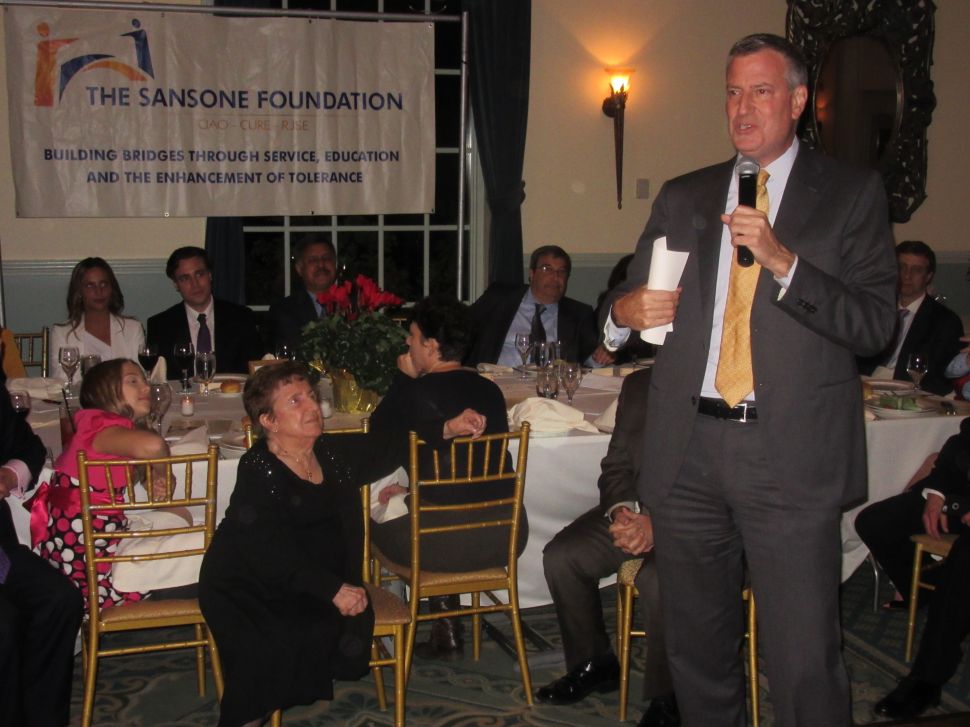