Mayor Bill de Blasio today railed against what he called a “nasty” and “repulsive” smear campaign — which he seemed to compare to the McCarthyism of the 1950s — that led in part to the stepping down of his wife’s chief of staff, Rachel Noerdlinger.

“We saw this in the 1950s; we’ve seen this throughout the history of this country — if someone wants to smear people and use that for political purposes, there’s a pretty easy playbook for doing it,” Mr. de Blasio told reporters at an unrelated Brooklyn press conference. “It’s repulsive, but it’s become quite common.”

Ms. Noerdlinger, who earned a $170,000 taxpayer-funded salary as chief of staff to Chirlane McCray, the mayor’s wife, announced she would take a “leave of absence” today after her teenage son, Khari Noerdlinger, was arrested on Friday. The leave, which will be unpaid and indefinite, will allow her to focus on her son, Ms. Noerdlinger said, though her own comments and Mr. de Blasio’s seemed to indicate the ongoing press coverage of her personal life was also a factor.

The teen’s arrest is just the latest in an ongoing saga surrounding Ms. Noerdlinger, who fast became the most controversial member of the de Blasio administration after it was revealed the former Rev. Al Sharpton spokeswoman’s live-in boyfriend had been convicted of manslaughter as a teen and more recently of cocaine trafficking. That led to a deluge of other stories — about Ms. Noerdlinger’s unpaid taxes, about her son’s social media presence, about her leaving her boyfriend off city Department of Investigation paperwork.

“Character assassination happens every day in public life — what’s sad is when it goes beyond the boundaries of the public servant and starts to be something that can include anyone they ever met, any family member, anyone they’re romantically involved with, their children,” Mr. de Blasio said. “Look, you guys do what you wanna do, but for the rest of us, as citizens, as people trying to make this city better, or this country better, we have to get on with the work and not be putting so much energy into one person’s personal life.”

It’s that work, Mr. de Blasio said, that was the reason for the smear campaign he alleged was launched against Ms. Noerdlinger.

“We’re all mature adults here — this is, a lot of really nasty stuff was done here, it is clearly for a purpose,” Mr. de Blasio told the Observer. “It’s quite obvious. Why would so much attention be given to one person and her personal life? It’s clearly a pretty systematic effort to undermine certain work that’s being done. We’re not going be dissuaded by that one bit.”

Mr. de Blasio never said just what work he thought was being targeted, but police unions have been among the most strident critics of both the mayor and Ms. Noerdlinger, whom they have attacked as being anti-police in what some have seen as a proxy fight for the battle over new labor contracts and for the unions’ disdain for Mr. Sharpton.

Mr. de Blasio said the rhetoric of the unions and their contract negotiations would remain separate.

While he did not name any group responsible for the “smears,” the mayor repeatedly chided the assembled press for focusing on Ms. Noerdlinger –particularly for coverage about her son and her boyfriend — saying the story had been “far, far overblown.”

The normally affable mayor then went on to blame the media — who were wearing hard hats since the press conference was at a construction site, perhaps fitting attire for the tenor of the question-and-answer period — for the dearth of good candidates for public office.

“If you want no one to run for public office, keep doing what you’re doing,” he told reporters. “Maybe some people want it that way.”

He said he did not believe children should be fair game in attacking Ms. Noerdlinger — even though he used his own children in political ads. The difference, he said, is that he ran for office, which invites intense scrutiny.

“Now, apparently there are no ground rules — not surprisingly, a lot of people don’t want to go into public life. I would ask you all to consider what affect that’s having on our city, our state and our nation — if you’re interested,” Mr. de Blasio asked of the press corps. “But when it comes to a public servant who signs up to work as an appointee, I’m sorry, it’s just not the same thing. Their child should not be our interest. That’s the bottom line.”

Mr. de Blasio’s strong defense of Ms. Noerdlinger — even as she’s stepped down — is not surprising. He’s staunchly backed her as story after story emerged, and as critics called for her to step down.

The mayor said he expects his wife to appoint a new chief of staff in Ms. Noerdlinger’s absence, though he said if she wants to return to the administration in the future, there would be a space for her.

“There’s plenty of other important work to be done, and she brings a lot to the table,” he said. 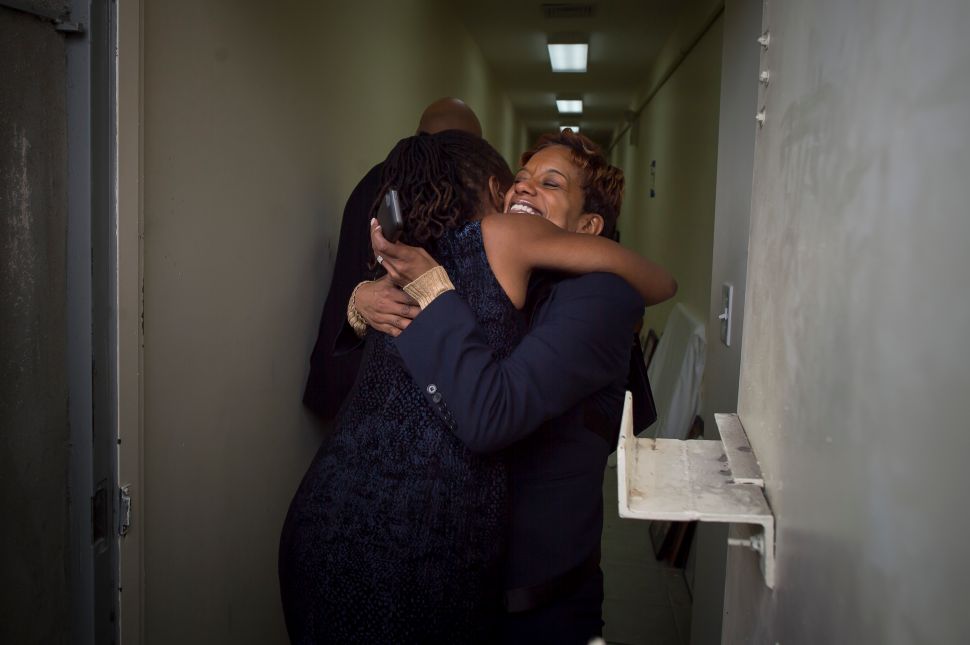