Mayor Bill de Blasio argued to reporters today that he is not at fault for the failure of Democrats to capture the State Senate, nor for GOP Congressman Michael Grimm’s stunning defeat of former Councilman Domenic Recchia yesterday–even though Republicans in all races relied heavily on linking the Democratic candidates to Mr. de Blasio and his policies.

Mr. de Blasio maintained that yesterday’s blue bloodbath was not a result of real and perceived connections between himself and his party’s candidates in more conservative parts of the city and state. The mayor invested considerable effort, funding and even staff members in helping Democrats trying to take four contested State Senate seats and in ousting Mr. Grimm, and the triumphant Republicans all used his image in their attack ads.

“I don’t think that’s how politics works. I think it’s about the issues the candidates choose. I think it is about the vision they put forward, and I think it is about how they reach people at the grassroots,” Mr. de Blasio said, arguing that the average New Yorker resident has other things on their mind besides who is connected to who. “I think the politics of endorsement, the politics of association, have much less to do with the way that people make decisions, because people are dealing with such economic challenges. There’s tangible challenges in their lives.”

“A Democratic candidate prevailed with a clear progressive message, and a great effort to reach people at the grassroots. And, sadly, that didn’t happen everywhere,” Mr. de Blasio said.

Pressed to explain the defeats of upstate Democrats Justin Wagner, State Senator Cecilia Tkaczyk and State Senator Terry Gipson–and of Mr. Recchia in the congressional district spanning Staten Island and southern Brooklyn–Mr. de Blasio suggested it had to do with depressed turnout among liberals during mid-term elections.

Mr. de Blasio argued the network of donors and unions he helped organize would lead the Democrats to victory in the upper house of the legislature two years from now.

“A coalition got built over these last months that unlike anything I’ve seen in the last quarter century,” he said. “I’ve never seen so many crucial leaders and organizations on the same page about the need to turn the Senate Democratic.”

“People all across this state understand what’s going to happen in two years,” he added.

The mayor argued that ultimately, the red shift would have little impact on his Albany agenda–noting that the Senate funded his universal pre-kindergarten initiative even though the Republicans controlled the body in concert with the breakaway Independent Democratic Conference.

“A few things changed with this election, but not many things. It’s a very similar dynamic to what we faced this past year,” Mr. de Blasio, and adding he had an appointment to speak with GOP Senate Majority Leader Dean Skelos later in the day. 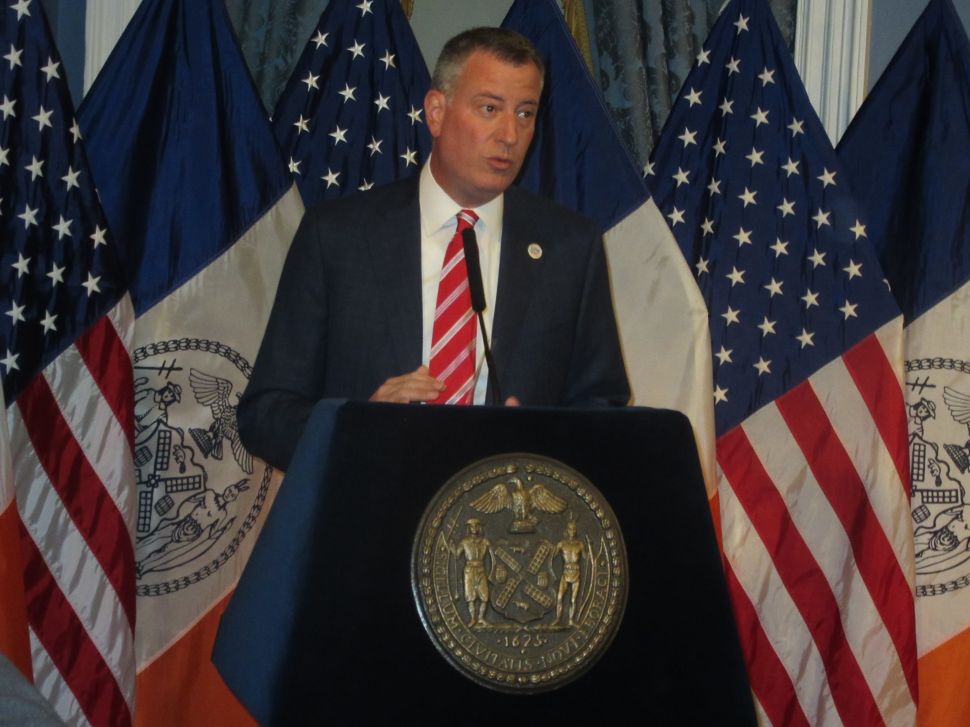