Nostalgia is for weak imaginations and Buzzfeed listicles. So it came as some surprise the other night when, slightly drunk and helping a friend unload gear into her practice space on S 2nd and Wythe, I looked across the street at the soon-to-be-gone Death By Audio and suddenly wanted to fall to the frozen sidewalk and cry my fucking eyes out for our lost venue/scene/youth.

After writing requiems for 285 Kent, Dead Herring, Big Snow Buffalo Lodge, and probably more that my aging brain is too feeble to remember, I thought I might let this one go by unremarked. Enough is enough! Stop living in the past! But as I realized that night, Death By Audio was the first one that really hurt. If 285 Kent was the sexy bad boy who takes you down a short but thrilling road to ruin (#born2die), Death By Audio was the faithful husband: kind, dependable, to have and to headbang until gentrification do you part. It was the type of flimsy, art-festooned punk house that exists in every city and college town in America and has since the late ’70s, but it was our flimsy punk house. Maybe it was its transhistorical quality that helped us perform the same willful suspension of disbelief one might with an aging parent, even as glassy douche habitats sprang up around it like so many toadstools after Big Finance makes it rain.

It feels especially personal for me, as DBA has been open the exact seven years I’ve lived in Brooklyn and hosted some of my first attempts at music journalism. Some of my favorite since-disbanded acts performed there: Ponytail, These Are Powers, Double Dagger, Vivian Girls, Parts and Labor, etc. It might also have something to do with the fact that I’m turning 30 in a few months and going through a minor existential crisis about what I’ve been doing with my life these past seven years to still be eligible for Medicaid and should I should learn another trade before my eggs get old? Why is the tattoo on my muffin-top growing? Will I ever be on board with anything #relevant again? And when will those kids get off my lawn?

Then, of course, there’s my somewhat less selfish concern for the future of underground culture in NYC, a concern echoed by Patti Smith, David Byrne, and various other dinosaurs. What’s going to happen when we run out of neighborhoods to migrate to (and, some would say, ruin … although modern gentrification is a much more powerful, less stoppable process than the right-wing “populist” architects of hipster-as-bogeyman would have you believe)? Scene dad Todd P tells me there will always be underutilized spaces and 501c3 venues in which to throw “alt” type events, but he’s been succeeding on his own terms for so long he might not remember what it’s like not to know what the fuck you are doing, and he definitely doesn’t know what that’s like in our current economic climate. He’s helped countless young crazies (self included) make things happen, but how many people are going to make it to his level when multiple 20-something door guys are giving me quotes like “someone is gonna keep it going, but it won’t be us. It will be people younger than us”?

Counterpoint: who cares? About as many people as will fit inside Death By Audio, I suspect. While head honcho Edan Wilber has inspired great loyalty with his devotion to alternative, grassroots, non-commercial culture despite such things being passé to even discuss in these postmodern times, “Entertainment4Every1” is kind of a misnomer. Sure, everyone was welcome at DBA, but those who showed up were largely a self-selecting group of artsy, middle-class-raised (if downwardly mobile) people in their 20s and 30s, low on cash but high on cultural capital, and the music stayed within a relatively narrow range of genres: Entertainment4Every1WhoLikesLightningBolt. After seeing some incomprehensible neo-rave-tumblr-core made by teenagers around the corner, I would often scoot over and wrap myself in a comforting blanket of noise-rock and … people just like me, or enough like me to find some common ground. That was awesome after being the ugly duckling my whole life, but if you’re going to operate on left-leaning punk ideology, you need to be self-critical. Congrats on not booking Death in June; now let’s talk about white dudes with guitars. Maybe that’s part of why those tough-talking preteens outside turned on me so fast when I got it in my head to stage a feminist intervention on their catcalling: “This is our block, you stupid bitch.”

Maybe it’s O.K. to surround ourselves with likeminded individuals so long as we don’t do it all the time. This is a city of tribes, after all. For the time being, there are still plenty of places to do that: Shea Stadium, Secret Project Robot, 538 Johnson, and countless other spaces in other scenes not discussed here. But as the nebulous concept of “DIY” grows along with its practitioners, perhaps it’s best to at least try to incorporate a wider concept of community. The soon-to-reopen Market Hotel has that as part of its mission statement, and Silent Barn regularly fumbles toward inclusivity with community meetings and projects. Maybe it’s alright to let the past go, even as we carry its best aspects into the future and learn from our mistakes. Definitely it’s time to pick ourselves up off the cold, dirty sidewalk, because we have a cat and a partner now who would worry if we got sick, and also our pauper’s health insurance is not so great. 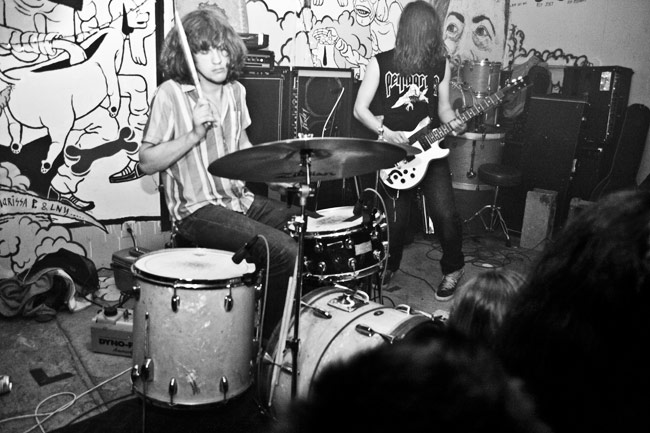