After taking a commanding lead in what has been a brutal campaign, Republican Congressman Michael Grimm today argued that Democrats and Republicans aren’t so different — except for “ultra-liberals” like his opponent, Domenic Recchia.

Mr. Grimm accepted the endorsement of Rev. Erick Salgado, a conservative Democrat who made a minor run at the mayoral nod last year, at unity-themed event dubbed “Democrats for Grimm” attended by about 25 people at the Staten Island Republican Party headquarters.

“We’re looking for the U.S. to lead, and we are stymied — we are literally just crippled — by the politics. So today, what I hope comes of this is the beginning of many Republicans, Democrats alike getting together and saying, ‘you know what, my community means more to me than this particular person or that particular issue,'” Mr. Grimm said. “When you really boil down some of the differences between Democrats and Republicans, they’re trivial.”

But at the same time, Mr. Grimm and Mr. Salgado sought to paint Mr. Recchia, a former Brooklyn councilman, as outside the realm of traditional Democrats and Republicans.

“Who is going to represent us in Washington? Do we want to give that responsibility to an ultra-liberal New York City politician? We don’t want an ultra-liberal City Hall politician to have this responsibility, because he don’t think like we do. We cannot transmit the priorities we have on this island to Washington, D.C.,” Mr. Salgado told the crowd. “So therefore, my friends, we only have one choice, and that choice is to re-elect our Congressman Michael Grimm.”

Mr. Grimm spoke warmly of his parents, who were both Democrats when he was growing up and spoke of today being a time to “set aside our political differences.”

But he wasn’t quite ready to do that with regard to Mr. Recchia.

“The Democrats running against me are ultra liberals, they’re not traditional Democrats like those that were here today, that have very similar values to Republicans. The ultra-liberal, progressive agenda has failed our country,” Mr. Grimm said.

The incumbent, despite facing a 20-count federal indictment relating to a restaurant business he no longer owns, is leading Mr. Recchia by 19 points in a Siena College/NY1/Capital NY poll released yesterday — enjoying strong support from his Republican base and independents.

His call today for unity — “We should be showing the world how to unite, how to be one,” he told the crowd — is not quite in line the rhetoric so far in a race so ugly the local paper said endorsing (and voting for) a candidate required holding one’s nose. Just a week ago, at a different rally, Mr. Grimm and supporters described City Council Speaker Melissa Mark-Viverito as a “socialist” to the “left of Mao.”

But Mr. Grimm disagreed with the suggestion both sides had used negative ads.

“I won’t say it’s fair to say — the media likes to do that, and that’s why I have some issues sometimes with the media,” Mr. Grimm, who famously threatened to throw a NY1 reporter off a balcony, told the Observer. “Because you don’t really paint a true picture. My ads, ok, are specifically about his voting record.”

He cited ads from his campaign targeting Mr. Recchia for voting on a resolution in favor of congestion pricing — “a disaster for this district” — and raising property taxes after the September 11 terror attacks, which he said are accurate in depicting Mr. Recchia is an “ultra-liberal from Brooklyn.”

But what about those clown mailers, or ones depicting Mr. Recchia as Frankenstein, or Pinocchio? They didn’t come from his campaign, Mr. Grimm said, and he’d asked for other groups to stop sending them.

“I don’t like silly mail, never have. You’ll never see anything put out by Michael Grimm for Congress that’s silly in nature or caricature or cartoonish — not my style, never has been,” Mr. Grimm said.

It may not be Mr. Grimm’s style, or come from his campaign, but plenty of allied groups are putting ads on his behalf that are both negative and deeply silly — including the group that hosted Mr. Grimm’s rally with Democrats, the Staten Island GOP. Less than a mile from its headquarters, where Mr. Grimm spoke about dispelling trivial partisan differences and focusing on the positive, the SI GOP has a billboard at the corner of New Dorp Lane and Hylan Boulevard.

It depicts Mr. Recchia as a Pinocchio puppet on a string, next to a picture of Mayor Bill de Blasio and Rev. Al Sharpton (handily identified in block lettering, for anyone who may be unfamiliar). Mr Recchia’s mouth is cartoonishly open. The board reads: “Recchia is a puppet for them not a voice for us! We can’t afford a liberal puppet in Staten Island.”

Next to a clip-art style rendering of the American flag, the ad urges voters to choose Mr. Grimm. 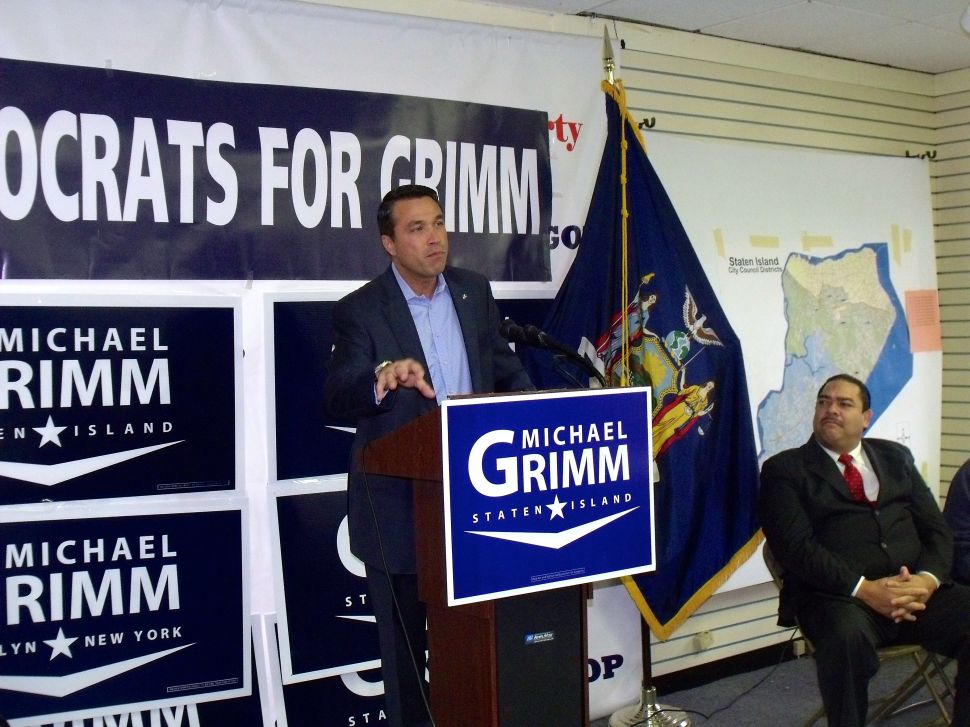