I’ve seen several incarnations of Edward Albee’s petrified play A Delicate Balance and hated them all. I also saw the movie, which vanished without a trace, and deservedly so. Now, in the latest Broadway exhumation at the Golden Theatre, stodgily directed by Pam MacKinnon, it’s once again a ridiculously overpraised critical cosset that I found to be dead on arrival.

In a role once played by Katharine Hepburn and Rosemary Harris, Glenn Close heads a wasted all-star cast (currently the rage on Broadway to keep the endless revivals of old war horses limping along to the finish line) as Agnes, the matriarch of a dysfunctional family counting the days in martinis and cognac while awaiting the apocalypse. (Mr. Albee must have read a lot of Thornton Wilder and never got over it.) Agnes rules a beautiful home in a New England countryside that is the best thing about the production. (Santo Loquasto’s elegant set is so well-appointed you wonder if there’s anything left in the windows of antique shops on Third Avenue to sell for Christmas.) Agnes barks disapproval of just about everyone in the house, which includes Agnes’ husband Tobias (John Lithgow), their raging and terminally venomous daughter Julia (a wonderful, scowling Martha Plimpton), and Agnes’ hostile, alcoholic sister Claire (a riveting Lindsay Duncan).

Suddenly the hornets nest is rattled by Harry and Edna, two obnoxious, uninvited neighbors (Bob Balaban and Clare Higgins) who refuse to go home. This brings out all of the stingers of an insect colony already spouting enough poison to send an innocent observer to the nearest ER, while distracting the viewer from the fact that nothing whatsoever is happening. At the critics’ preview I attended, everyone seemed to be nodding off except the critics. This is one of those sacred cows people pay good money to see because they’ve been told it’s a combination of “theatah” and “art.”

Meanwhile, all I can recommend is the fun of watching six inventive actors, frozen by stale direction and pretentious playwriting into trying to stay awake themselves. Meeting the demands of speaking proper English without action, they give it their all.

Ms. Plimpton is dynamic as the petulant, whining, immature 36-year-old daughter who always drags herself home after each divorce (four so far). This time her stormy temper rises to an unprecedented crescendo when she finds her room confiscated by two of her parents’ friends she hardly knows. Mr. Balaban and Ms. Higgins are organically ominous as the intruders who are terrified by unexplained phantoms they cannot explain. Mr. Lithgow is properly dull as the weak, passive husband who smokes too much and drinks anisette without throwing up. Ms. Duncan, a patrician British beauty who watches from the sidelines like an adder ready to strike, is deliciously nasty and almost as funny as Elaine Stritch, who played the role of Claire in the last Broadway production I saw, chewing scenery and over-emoting through everyone else’s lines. Which leaves Glenn Close to her own brand of stoicism, delivering deadly monologues with an uncustomary monotone that lulls the audience into the arms of Morpheus.

What any of it means is anybody’s guess. A Delicate Balance is a sour, depressing, bleak and ultimately rather hateful play about resignation to emptiness in the lives of a group of hideously unpleasant neurotics you wouldn’t want to share a sherry with, much less a game of canasta. The actors work hard to keep it from being more maudlin than meaningful. As the melancholy wife who contemplates senility as easily as sewing catch phrases into the linen, Ms. Close moves through two hours and 45 minutes, three acts and two intermissions like a pair of scissors—cutting silences, maintaining order and restoring peace. The craftsmanship is there, but the play that frames it as a whole left me cold as the dead of winter in which it was set. I can’t remember ever wishing harder for a heat wave. 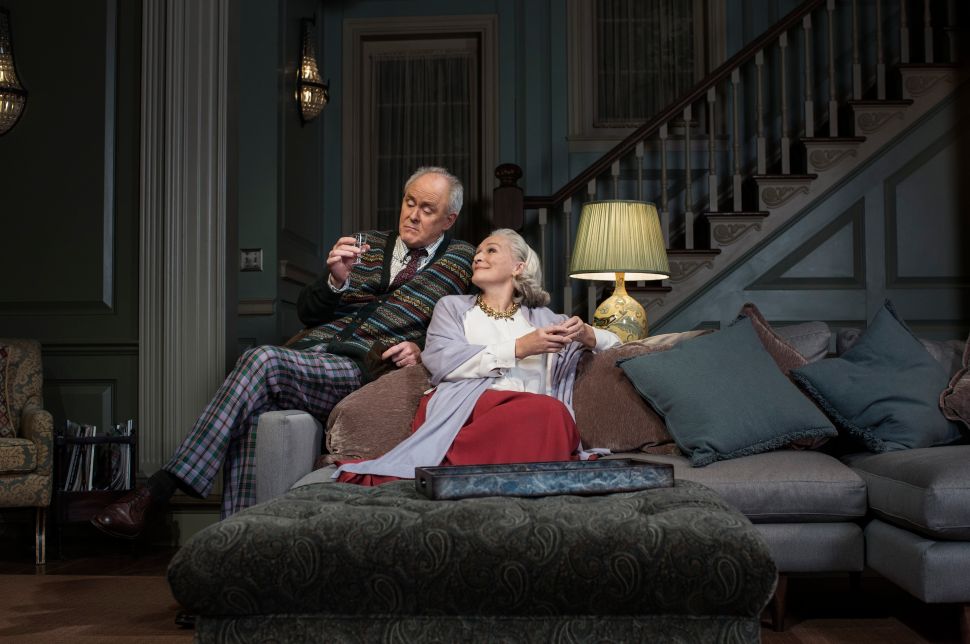