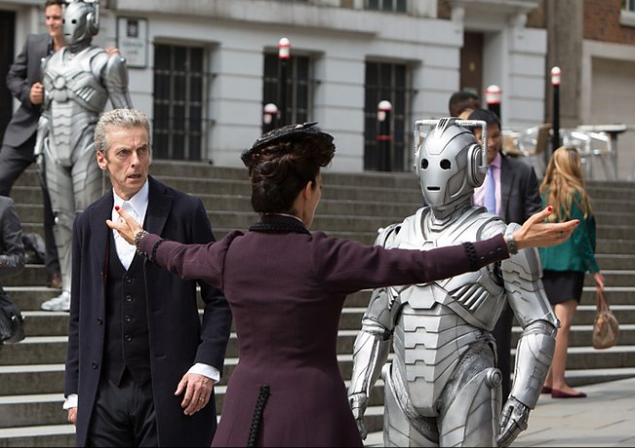 The Doctor, Missy and the Cybermen. (BBC One)

We’re one episode from the end of this compelling but very strange season of Doctor Who, and one thing has by now become very clear about this new version of the Doctor. He has a very strange habit: chasing after ghosts that he doesn’t believe in.

He’s usually right, of course—the ghosts he flies the Tardis after turn out to never have existed. But if so, we are forced to ask, why bother to go chasing in the first place?

The most daring and interesting episode of the season, “Listen,” was plagued by a version of this riddle. If the Doctor was so compelled to find his theoretical “perfect hider,” the monster under the bed, why turn away at the crucial moment? Why refuse to be proven right?

And now we get the companion piece to that episode, “Dark Water,” in which our dynamic duo goes traipsing into Danny Pink’s timeline once again. Only this time, they travel into his afterlife. In this case, our ghost-chasing problem has infected the whole narrative. And not for the better.

If all the silly business we have to deal with in this episode is predicated on the deep affection that the Doctor has for Clara—if he is going to fly into the afterlife in order to Orpheus back the love of her life, then he better damn well harbor some belief that life after death could exist, some way, somehow. Otherwise, isn’t it all just smoke and mirrors? Isn’t it profoundly insulting, both to Clara’s grief and to our expectations as viewers?

In fact, all of this justification for flying the Tardis into the afterlife is just prologue: the moment we step into the mausoleum of the living dead, the Doctor immediately discards his supposed faith in twoo wuv bringing Clara and Danny back together. Suddenly he’s on another skeptic’s mission to disprove it all. The fact that he’s right doesn’t make the path the writers took to get them/us there any less cheap or manipulative.

So: Danny is dead, Clara is insane with grief, so much so that she is willing to lock the Doctor out of his Tardis forever as blackmail. In a quite lovely emotional turn, the Doctor reveals another level of the deep caring that underlies his gruff exterior, answering her absolute betrayal with forgiveness. And then he nearly ruins it all with an awful pun on “go to hell.”

Which, it turns out, is where they are going. Or wherever dead souls go where they die. Which is nowhere, because the whole universe of Doctor Who is predicated on the idea that the spiritual and the unexplainable are always caused by aliens and eventually fully explained. Which makes about two-thirds of this episode utterly meaningless.

Danny is somewhere, talking to Seb, the officious afterlife official we’ve glimpsed in several episodes this season. In the Nethersphere, we learn, the dead can still feel what is happening to their dead bodies on Earth. Leading to the gorgeously gruesome image of dead souls suffering through their own cremations. Danny is also confronted with the soul of the child he killed as a soldier, with terribly awkward results.

The Doctor and Clara, meanwhile, find themselves in a weird mausoleum with dead bodies rotting away in preservation tanks full of “dark water,” which only lets them see organic matter. It is a brilliant technology that is absolutely useless for the purposes of the characters who use it—I cannot imagine a reason why anyone would have invented it—and therefore it clearly exists only to delay the big reveal of the episode’s scary monsters until the end. This really is science fiction writing at its absolute worst.

The Doctor finally meets Missy (introduced as MISI, because she pretends to be an android for at least a few minutes). Michelle Gomez finally gets a chance to let loose, and she does not disappoint—chewing the scenery like Mary Poppins on a Benzedrine binge. While Clara talks to Danny over the afterlife’s “spotty Wi-Fi” (OK, sure, let’s go with that) and tries to determine if it is really he or just a simulacrum (still unclear), Missy reveals the true nature of everything to the Doctor.

From the top: there is no afterlife, and the Nethersphere is actually just a huge hard drive into which the consciousnesses of the dead are downloaded, while their bodies are upgraded into, you probably guessed it, Cybermen. And the mausoleum is actually right in the middle of London, which the Cybermen are about to invade. Oh, and that huge hard drive is Time Lord tech, because Missy is a female regeneration of the Master, still clearly obsessed with the Doctor, but now in a putting-her-tongue-down-his-throat kind of way.

So all of that setup, the hints dropped all season long, the new Doctor pursuing impossible riddles, Clara’s emotional rollercoaster, Danny dying and them chasing him to the afterlife—it was really all just a way of getting us into yet another Cybermen invasion? (And by the way, doesn’t anyone in this universe have any other template for a killer cyborg? They always have to have head handles and penny-farthing eyes?) That is a lot of conceptual and narrative hand waving, only to end in a classic Who attack narrative. I groaned aloud at the letdown.

And yes, this was the first part of a two-parter, so I should withhold judgment, I suppose. We may yet have some interesting surprises in store. Danny Pink, or at least his consciousness, is still dealing with some pretty heavy stuff, in the person of the kid he killed. And perhaps they will be able snatch victory out of the jaws of silliness by resurrecting him somehow, despite the fact that his body is, in fact, very much dead. 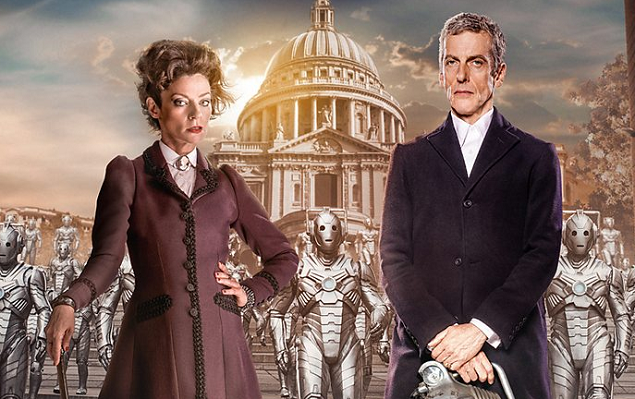 Filed Under: TV, TV, recap, Doctor Who, Dr. Who