Halloween has come and gone, but it’s never too late for a good scare. Personally, I’m through with silly, lovesick vampires. Bring on the werewolves. Writer David Hayter (he penned The Scorpion King and two entries in the X-Men franchise), a cult favorite among horror-flick fans, must agree. For Wolves, which marks his feature-length directorial debut, he stretches his reputation for always trying to inject something new and just a little bit different into old genres with an investigative slant on the mythology of wolves. It’s sexy, violent and creepy, but damn if it didn’t keep me glued to my chair with tension.

Newcomer Lucas Till plays Cayden, a popular high school quarterback with a good family, a pretty girlfriend and a promising future. One day in the middle of a game, he beats another player to death in a vicious attack, then grows fangs and rips his parents apart at home. Yes, Cayden discovers without warning, he’s a teenage Wolf Man. What a bummer. Carnivorous Wolf Men may not eat quiche, but they do cry. Lost and confused, doomed to a life on the run, feasting on blood, unable to control his urges and never knowing when he’ll strike again, Cayden runs away from home searching for others like himself. No full moons, silver bullets or necklaces of wolfsbane here. What Cayden learns about lycanthropy is that anyone can turn into a one-man creature feature, but you’re even more vulnerable if you’re adopted. Part of the movie’s thrust is to find out who his real parents were and why Cayden is cursed. The answers are not pretty, but they are pretty imaginative.

Cayden ends up in a rural hamlet called Lupine Ridge for reasons that should be obvious to anyone who has ever seen a movie with a hirsute Lon Chaney, Jr. All too soon, Cayden is surrounded by wolves farming, wolves hanging out at the local tavern and wolves terrorizing the town in a motorcycle gang. There are good wolves and bad wolves and telling them apart gets confusing in the overwrought plot, but the horrible things they do to each other give cruelty and depravity new dimensions. The meanest monster of them all turns out to be Cayden’s real father. To protect the good wolves from the evil wolves and save the girl he loves, Cayden gets caught between two ancient clans of monsters—the ones who were born to howl and the ones who were bitten by accident—who must fight it out to the death on (what else?) Halloween!

It goes on and on, defying most of the werewolf clichés in old Universal horror movies that have gone before, and I never realized how much I’d miss Maria Ouspenskaya. But if it sounds silly, remember writer-director Mr. Hayter is always bringing it back to life. His wolves have brains, feelings, motivations, family histories—all the things that separate hairballs from humans. It’s feverish, fresh, thrilling, clever and hilarious. (One woman confesses she’s not really a wolf at all, just a lady who digs men with hairy chests.) But the laughs are outweighed by serious intentions. Mr. Hayter insists, in the production notes handed out to critics, that Wolves is not just another werewolf movie, but a movie about the inner wolf in all of us.

Fangs for the thumbs up. 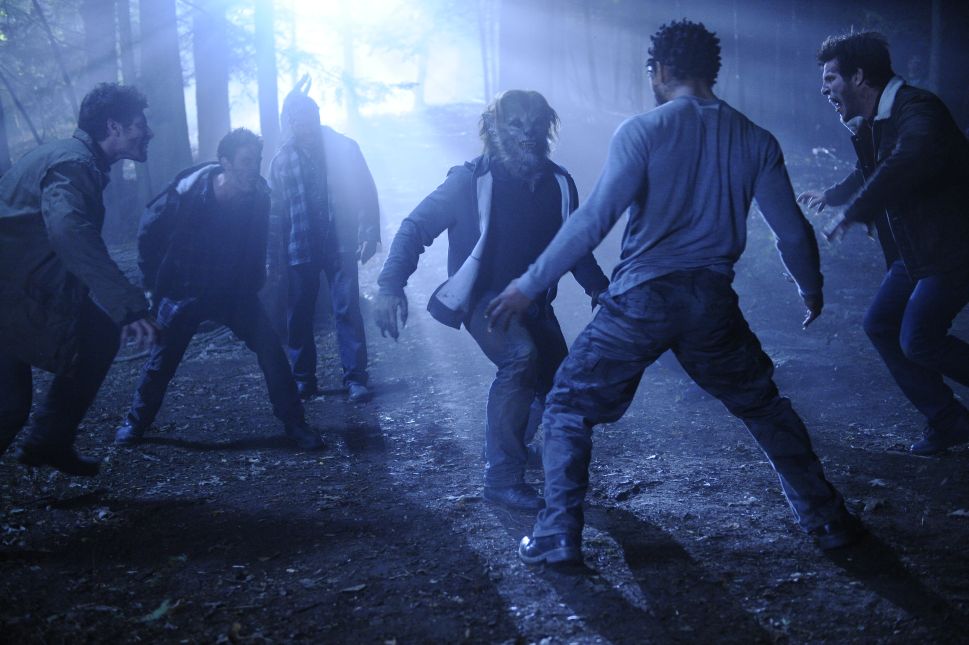