After a bruising campaign many thought was his to win, Democratic former Councilman Domenic Recchia Jr. conceded to incumbent Congressman Michael Grimm tonight.

Mr. Recchia, gathered with supporters at the Vanderbilt, a catering hall on Staten Island’s beachfront boardwalk, took the podium beside his wife and three daughters, along with Staten Island Councilwoman Debi Rose, State Senator Diane Savino and Assemblyman Matthew Titone. The Democrat said he had phoned Mr. Grimm to concede and congratulate him on his landslide 55-percent-to-41-percent victory.

Mr. Recchia recalled a quote from President Abraham Lincoln, who after losing eight races said that he felt like “a boy who had stubbed his toe in the, and was too old to cry, but it hurt too much to laugh.”

“I promise I won’t do either here tonight,” Mr. Recchia said. “I ran this race, and in the end I stubbed my toe.”

It was the first time Mr. Recchia had appeared at the party that evening. Staten Island Democrats were reluctant to acknowledge the loss, with Ms. Savino and Mr. Titone taking the podium at different times to claim the race was “too close to call”–even as Mr. Grimm’s lead grew from 4,000 votes to 5,000 to 9,000 to almost 12,000.

Mr. Recchia–who served as chairman of the City Council’s powerful finance committee–was term-limited out of office last year and decided to challenge Mr. Grimm after failing to secure support in his party to run for City Comptroller or for borough president of his native Brooklyn. He initially seemed at a disadvantage against the incumbent, as roughly 70 percent of the district is Staten Island, where Mr. Grimm makes his home.

But the landscape seemed to begin to shift in the Democrat’s direction in January of this year, after Mr. Grimm physically threatened NY1 reporter Michael Scotto when the journalist tried to ask about a four-year investigation into the Republican’s financing of his first campaign.

Then, in April, federal prosecutors charged Mr. Grimm with 20 counts of tax fraud and perjury, relating to the operation of a Manhattan restaurant he co-owned prior to his 2010 election. Some observers thought the race was in Mr. Recchia’s hands–though top Democrats and insiders remained cautiously optimistic about his chances.

Mr. Recchia’s campaign stumbled, however, when the candidate badly flubbed questions in front of cameras about the Trans-Pacific Partnership trade agreement and about Mr. Grimm’s labor record. The challenger later claimed to “have great knowledge of foreign affairs” based on his overseas vacations and his operation of a foreign exchange student program in Japan at a Brooklyn high school–which culminated in a vicious national lampooning on the Daily Show.

A September poll showed Mr. Grimm up by four points–within the margin of error. Mr. Recchia elected to skip two debates, and struggled to answer questions in others.

The poor public attention began to wear on the candidate and he appeared to be avoiding media. A poll shortly before the election showed Mr. Grimm leading by 19 points.

Mr. Recchia acknowledged his struggles with articulating his ideas in his concession speech.

“I may not be the best talker, but I’m a great doer,” Mr. Recchia said. “At least I can get started on my next project, a book about the global implications of the TPP trade agreement!” 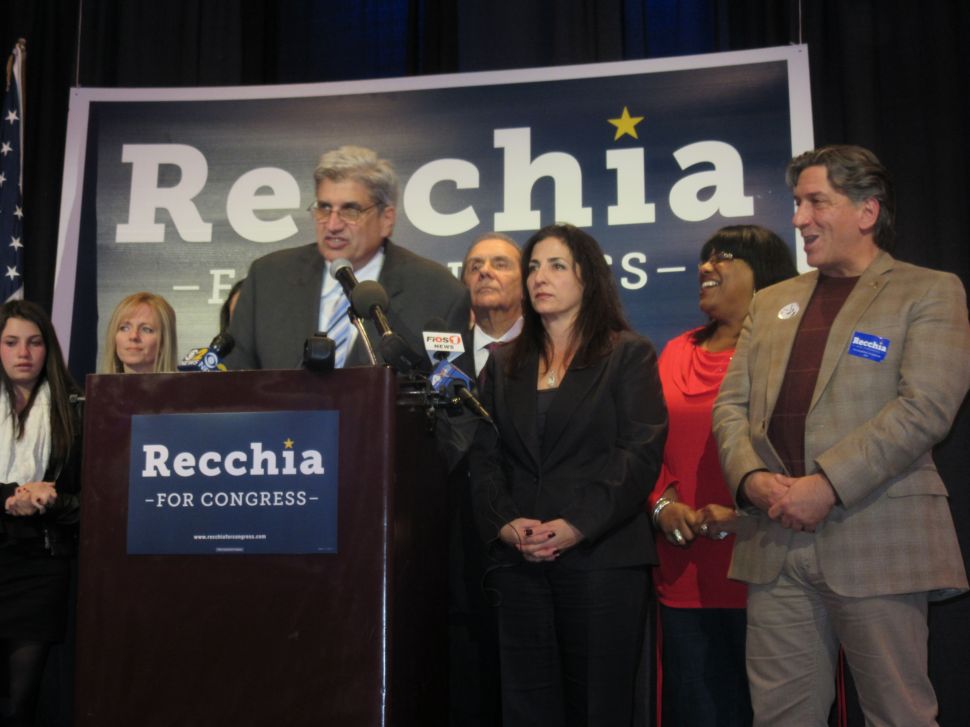