A session with Dr. Ruth in her Midtown office recalls satisfying sex. It is never boring, infused with tenderness, punctuated by laughter and lasts nearly an hour. It is also entertaining, as she has much to discuss in her recognizable German accent with rolling R’s. Dr. Westheimer, 86, teaches a weekly seminar at Columbia on family and the media, is working on an illustrated children’s book about a turtle, and recently co-wrote Myths of Love: Echoes of Greek and Roman Mythology in the Modern Romantic Imagination.

You and I last met in the mid-1980s at a nightclub called Kamikaze, where I worked. John F. Kennedy Jr. happened to be in the club that night and he asked to meet you. I do remember how handsome he was. I do remember how impressed I was. That this little Dr. Ruth Westheimer is meeting somebody from the famous Kennedy family. And I would have told him that if he has any issues, to come see me for free. And I would have said, “Let’s talk how we can make your life better,” and I certainly wish that he would have listened to me and he would be alive today.

In West Virginia for an article. In 1947, 48, I was in the Haganah, the forerunner of the Israel Defense Forces, and I did not know that I have that talent of being a sniper. I’m a super good shot. I can still put five bullets in a red circle. But I don’t touch a gun since Columbine.

Why do you think that many Americans find guns sexy? Penile extensions? I don’t find [guns] sexy. I was badly wounded on my 20th birthday. A cannonball came into the students’ residence in Jerusalem, exploded, killed some girls right next to me, and the shrapnel went through both my legs. But that’s not why I’m short.

Can you remember a myth from school in Germany? I left [Frankfurt] at the age of 10 on a kindertransport to Switzerland. The myth I remember is that if you put a piece of sugar outside your window, the stork will bring a baby. I was an only child. I remember that I put two pieces of sugar out for a long time, because I wanted an older brother, and it did not happen. Now I know better.

You wrote in your book about lost love. Did a Greek myth help you cope with the loss of your husband in 1997? It was a wonderful marriage. What worked for me? First of all, I have two wonderful children, who have wonderful spouses. What helped me is that I am so busy. It’s good to be a widow in New York, because I can do something every night. Turtles if they stay in one place they are safe, because they carry their house on their back. But if that turtle wants to move, it has to take a risk—and stick its neck out, which means it could get hurt.

Have you stuck your neck out in a romantic way since your husband died? Next question. Put that down.

You started talking about sex on radio in 1981. In that third of a century, how has this country’s attitudes toward sex heartened you and frustrated you? We still don’t have enough education about prevention of pregnancies, about contraception. What makes me very sad is that we have contraception and abortion in the political arena rather than public health. What rejoices me, is that [more] women take the responsibility for [their] orgasms.

There used to be the saying, “Lie back and think of mother England.” That doesn’t exist any more.

What is your guilty pleasure? I read the horoscope, and when I like it I smile and when I don’t like it, I say, “Dr. Ruth Westheimer, what’s the matter with you?” 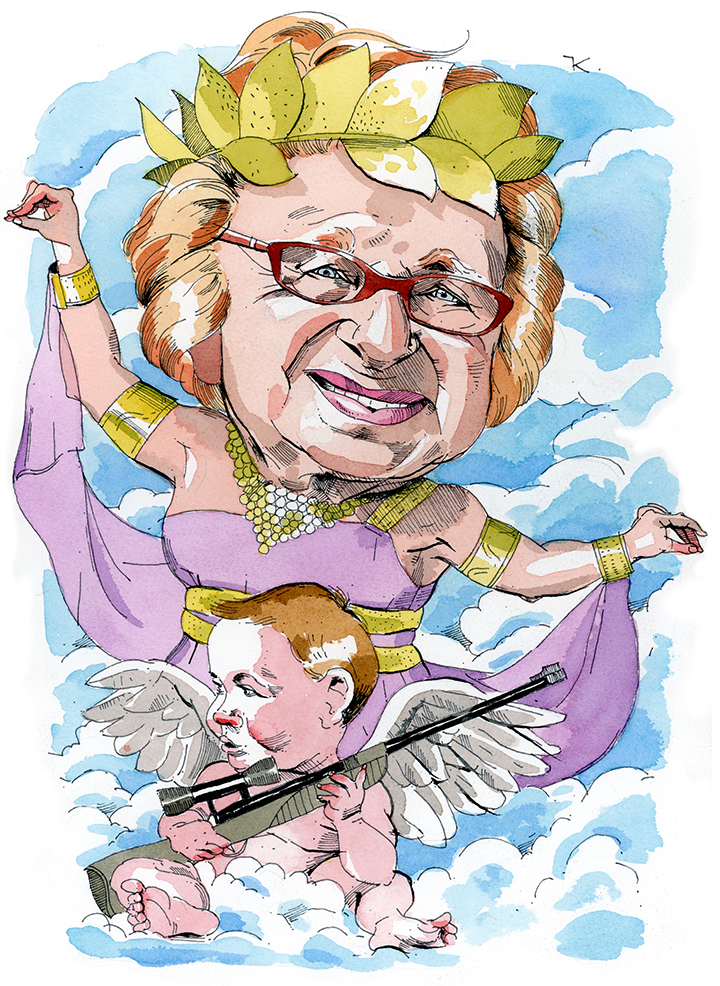