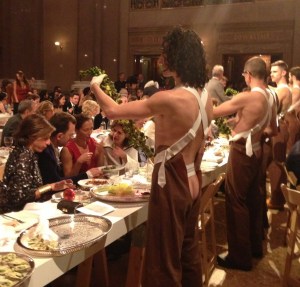 The vegan option at the Performa 2014 Gala.

It is fair to say that Performa, the art world’s influential performance art non-profit, does not do anything half-assed. Indeed, the asses of the waiters were fully exposed at the 2014 Performa Gala, which continues to set the bar, in a city quite weary of fund-raising tropes, for an inventive benefit.

Suffice it to say that dessert was served with hammers, as guests loudly and joyously smashed hollow dinner tables to get to the chocolates, cookies and cotton candy hidden inside. The event/performance piece, titled Fecunditas, was designed by artist and Studio 54 heiress, or at least descendant, Jennifer Rubell, still better known for her collecting family than herself, but that will fade swiftly.

The $1,500-per-plate banquet, held in a gorgeous old savings bank in Williamsburg, was ostensibly to honor a series of “Renaissance women,” (some of whom thoughtfully dressed like characters from Reign), including collectors and artists Melva Bucksbaum, Maja Hoffmann, Cindy Sherman and Laurie Simmons.

RoseLee Goldberg, founder of the Performa organization, now a delirious decade old and much more than its New York biennial, sparkled about in black and silver around the long tables of twenty, greeting guests individually.

Jennifer Rubell’s pieces– and they are quite serious pieces, make no mistake about it, memorable for sometime afterwards, as in all good art — operate by gradually eroding levels of pomp and resistance in the art world with a series of childish actions, calls for group interaction and socialization (“Take your picture with Prince William!”) and finally end in giddy surrender.

They seem initially meant to encounter disdain. “What’s this? They actually expect us to toss our dirty plates into a giant wooden bin? Ridiculous. How wasteful! Aren’t we supposed to be raising mon–Oh, well, Klaus is doing it….”

Whether it be asking for tips on carving the half-of-a-pig delivered on a silver platter or complaining about the soup — “Their table got better soup! What’s in their soup? Is that onions?”
“What’s in our soup?”
“Carrot and ginger. Too much ginger.”
“Can we get their soup?”
“I dunno. Ask the guy in the cape.” — Everyone starts talking.

Moreover, by lampooning food, ersatz religion of the otherwise overtly secular art world, Rubell makes it all about the experience, not the meal. Acolytes/guests included Francesco Vezzoli, Stefano Tonchi, and Marina Abramović seated near Klaus (Biesenbach), which effectively made everything else the kids table.

Great pains were taken to make the point that this was no standard rubber-chicken dinner:  A wooden scaffold of paprika-stuffed rubber chickens was suspended in the center of the room, and smashed into the floor as the main course began, raising a small cloud of red dust.

As for the afore-mentioned waiters in backless chaps, they appeared mid-meal with stalks of roasted brussels sprouts attached with harnesses, flagpole-like, to their nether regions.

A gentleman handed diners a large knife with which to carve off their vegan option. This raised issues of manners and safety: Do you cut towards yourself, or him, both seeming dangerous to the participants. Simple courtesy compelled many to cut as little and as quickly as possible.

Which was a shame, as the brussels sprouts were delicious. 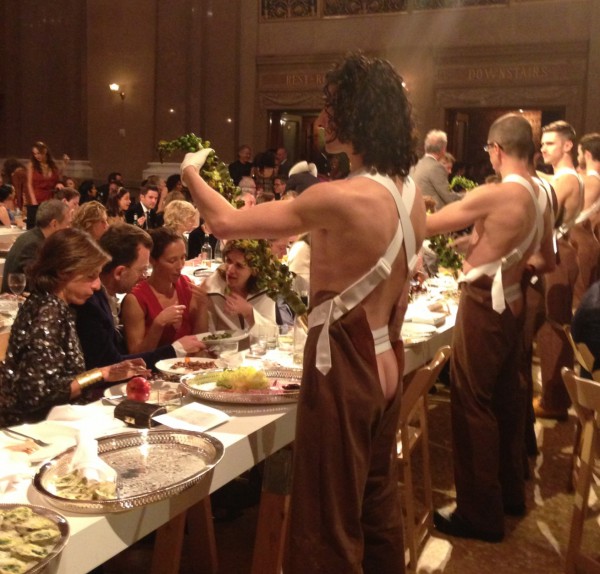