Attorney General Eric Schneiderman breezed to re-election tonight against Republican John Cahill, according to unofficial returns from the Associated Press.

Mr. Schneiderman won 56 percent of the vote to Mr. Cahill’s 40 percent with 74 percent reporting, returns show. He said on stage at the Sheraton Hotel in Midtown that Mr. Cahill had conceded the race.

“It’s a bad night for progressives but this election has made it clear we do believe in the American ideal of equal justice under the law,” Mr. Schneiderman said, alluding to the wave of Republican wins nationwide.  “I am the attorney general, I am the people’s lawyer.”

Mr. Schneiderman cited his work busting public corruption with the state comptroller, Thomas DiNapoli, and his efforts to curtail prescription drug addictions. He struck a more liberal chord than Mr. Cuomo, portraying his victory as a bulwark against what appears to be a GOP surge.

Though Mr. Schneiderman, who took the stage long after Mr. Cuomo, was always favored to win re-election, he faced a bruising challenge from Mr. Cahill, the former chief of staff to Republican Gov. George Pataki. The two traded blows in a televised debate last month as the tone of the campaign remained bitter.

And each accused the other of ethical breaches. Mr. Cahill charged that Mr. Schneiderman had taken money from people his office had enforcement actions against. In turn, Mr. Schneiderman slammed Mr. Cahill for his work in energy consulting, calling on him to provide a list of his clients and tweaking him for not registering as a lobbyist.

Like the gubernatorial contest, the fate of the corruption-busting Moreland Commission also factored into the race — with Mr. Cahill arguing that Mr. Schneiderman, who had deputized the commission, should have better steered it. Mr. Schneiderman has an icy relationship with the governor, with whom he campaigned just a couple of times.

But Mr. Schneiderman sought to tout accomplishments from his first term — running ads highlighting his fight for better benefits in national settlements with mortgage lenders and highlighting arrests in public corruption cases. Those ads may have helped to boost his public profile — earlier in the race he held the smallest lead of any statewide Democrat, suffering from lower name recognition.

Unlike his predecessors, Mr. Cuomo and Eliot Spitzer, Mr. Schneiderman has not had the same knack for seizing headlines. Voters still knew him well enough to return him for a second term.

“Ladies and gentleman, the United States of America is not just a country. It’s a project, it’s a project in which each generation is challenged to move forward, to make progress, to leave the country a little more just,” he said. “Our generation is challenged and here in the State of New York we are especially– given the opportunity, given what’s going on in a lot of other states, to show what Americans can do when we get together, we listen to each other and organize.”

This story has been updated to include comments from Mr. Schneiderman 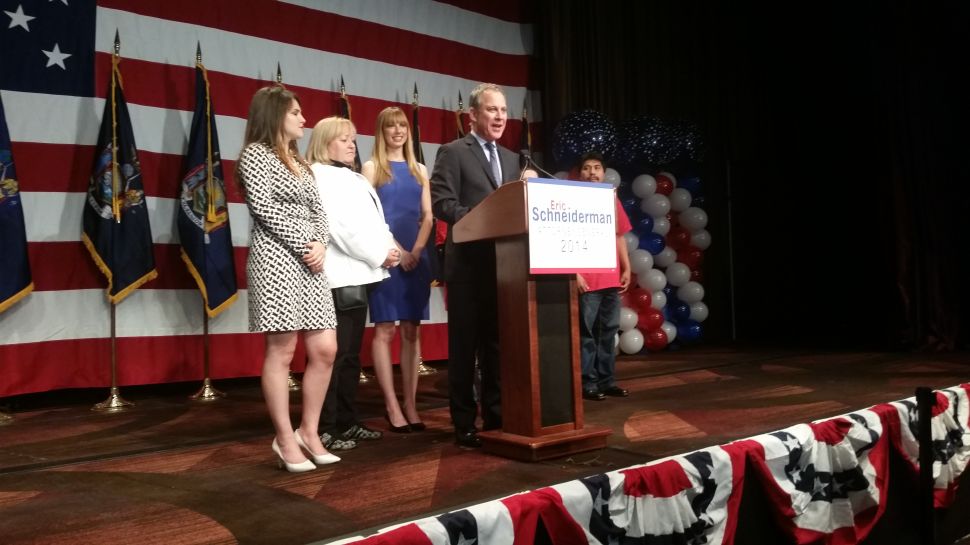