It’s the the Battle of Bag-dad.

Councilman Rafael Espinal today toured Lagmitz Paper and Plastic Co., a plastic bag distributor in his Brooklyn district, in a show of defiance to Brooklyn Councilman Brad Lander and Manhattan Councilwoman Margaret Chin and their proposal for a 10-cent surcharge on the disposable bags.

The freshman councilman, whose turf consists mostly of working-class and impoverished tracts of the borough, argued that the added cost would come down on the most vulnerable New Yorkers.

“The plastic bag tax does not make sense for low-income communities, it doesn’t make sense for seniors. It’s a tax that’s going to hurt the consumer,” he said, explicitly avoiding Mr. Lander’s and Ms. Chin’s preferred term “fee,” and dismissing their calls for New Yorkers to use tote bags. “Residents of my district use the metro quite frequently, and I think when you’re going to work and coming back from work, how difficult it is to carry a tote bag, especially as a man that doesn’t carry a purse.”

Joining Mr. Espinal for the tour were Lagmitz’s owner, Eli Amsel–who said he would almost certainly have to lay off several of his 14 employees should the surcharge succeed–and Mark Daniels, chairman of the Progressive Bag Alliance, an organization of plastic pouch manufacturers. Both bag men argued that more extensive recycling programs are the solution to the thousands of tons of plastic bags that move through the city sanitation system each week, and which amount to an estimated annual public cost of $10 million.

“We’ve been working hard to educate the consumers, and now legislators, that we’d like to have a public-private partnership that would really educate consumers on what can be recycled,” said Mr. Daniels. “We believe in consumer choice. If a customer wants to use a plastic bag, a reusable bag or a paper bag, we just want to give them the right information so they make the choice that works the best for them and their families.”

Mr. Espinal declined comment on which he considered more “progressive”–the Progressive Bag Alliance or the Progressive Caucus of the City Council, to which Mr. Lander and Ms. Chin belong. He did say, however, that he had spoken with both of his colleagues about the issue and hoped to arrive at a compromise–though he would not support any compromise that included a charge on plastic bags.

“We’ve talked about the fact that it’s a regressive tax, we’ve talked about how that’s going to affect jobs. They don’t see that as being an issue, but we’re going to continue talking to see what kind of a resolution we can come to,” Mr. Espinal said, adding that he preferred reducing plastic bag use with carrots rather than sticks. “Let’s not tax the consumer, let’s create an incentive so that if they decide to go re-usable, they get incentivized for it.”

This is not the first time Mr. Espinal, a member of the moderate Brooklyn delegation, has flouted his more liberal peers. In September, the councilman vowed to combat any effort to ban horse-drawn carriages in Central Park–a cause célèbre for Mayor Bill de Blasio and Council Speaker Melissa Mark-Viverito. Ms. Mark-Viverito has not yet taken a stand on the bag fee.

It’s also not the first time issues like this one have split liberal Democrats: several were initially opposed to a ban on plastic foam containers because of what they said would be a negative impact on small businesses. The Council eventually reached a compromise on that environmental matter last year — the law included a provision calling for the city to spend a year studying whether the plastic foam could be recycled effectively before a ban would kick in.

Mr. Lander and Ms. Chin plan to rally in support of their bag-fee bill on the steps of City Hall tomorrow shortly before it is considered by the sanitation committee–of which which neither they nor Mr. Espinal are members.

“It is very important that New Yorkers dramatically cut their use of plastic bags, and we recognize that a small number of businesses that process or distribute single-use bags may be negatively affected if we are successful in accomplishing that goal,” the pair said in a statement to the Observer.

“As for the effect of the bill on everyday New Yorkers, the goal isn’t for people to pay a new charge — instead it is for folks at all income levels to begin bringing re-usable bags and take far fewer disposable bags.  Evidence from dozens and dozens of cities that have already passed this kind of law shows that although it may take some getting used to, the vast majority will make the change,” they added. 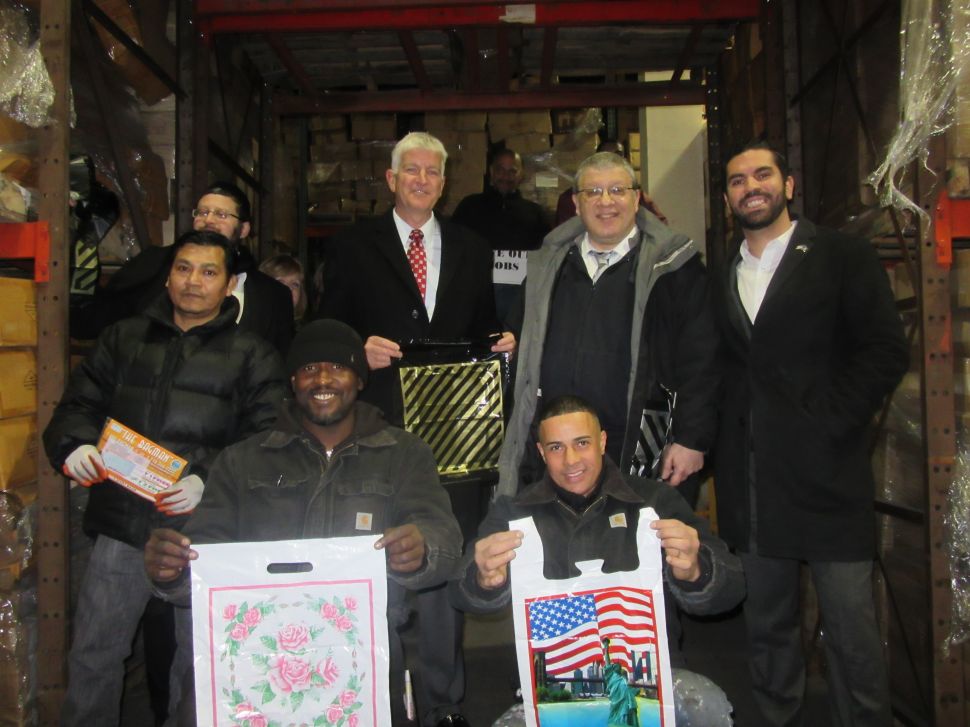