Characterized by President Obama as “the son of refugees who returned home to help chart a path for a free and democratic Estonia,” Toomas Hendrik Ilves grew up a genuine New Jersey kid. He was the valedictorian of Leonia High and knew of Bruce Springsteen before the Boss released his first album. He graduated from Columbia University and the University of Pennsylvania, and his American first wife gave birth to their two kids here. When Estonia became independent from the Soviet Union, Mr. Ilves became Estonia’s Ambassador to the United States, Canada and Mexico – all at the same time.

Now he is the president of Estonia, country of his parents, to which he returned to be with his new passion, the blonde bombshell Evelin, who he later married. Mr Ilves is a big fan of bow ties (his father wore one) and Twitter posts (39,000 are following @IlvesToomas).

His path to the presidency of the Baltic home country of his parents—a country sold out by the Molotov–Ribbentrop Pact and occupied first by the Soviets, then the Nazis and then the Soviets again—has been a storybook success.

In September of 2014, during his joint press conference with President Obama at the NATO Summit in Estonia’s capital, Tallinn, Toomas Ilves, 61, a passionate supporter of a strong NATO, bravely called the leaders of the world to stand up to the “Russian aggression” in Ukraine.

And yet he gave that speech with a heavy heart, for Mr. Ilves already knew of one battle he had lost.

Just ten days before the September NATO summit, Estonian tabloid Kroonika broke the story that shook the little European country off its feet. The first lady of Estonia, Evelin Ilves, 46, had been spotted dancing, hugging and kissing in public with a young stranger during a noisy and crowded party in the posh Tallinn restaurant Komeet. Later, photographs of the passionate hugs and kisses surfaced, and even a short blurry video of the scandalous event became available to the public.

The Estonian first lady and her partner left the party at 4:30 AM. A witness said, “[They] left the restaurant together and then both got into a car. It was a black Mercedes-S auto. There was a driver behind the wheel. And they left.” The Mercedes did not bring the First Lady home. In the tight-knit nation of Estonia (population 1.2 million) very few secrets remain out of public eye.

It soon developed that the young fellow spotted with the First Lady was a Frenchman named Vincent Aranegal, 28, an employee of one of Tallinn’s advertising agencies.

At the time of this scandalous event, Toomas Ilves was in Estonia working in the President’s palace to prepare for the coming NATO summit. Right after the story broke, his wife left the country with the couple’s 11-year-old daughter, leaving behind this comment on her Facebook page: “Now I have to go through one of the hardest times in my life. Forgive me those who I hurt.”

The Estonian president’s press secretary couldn’t hold her anger, loyally saying: “This is indecent behavior towards one’s husband, no matter what position he holds.”

Since then, Estonian First Lady was hardly been seen in public—especially together with her husband. And she never spoke on the matter—until now.

Last Tuesday, on the Estonian TV morning show “Tereversioon,” Ms. Ilves presented her own cook-book, which was obviously written during her recent reclusion, and baked a loaf of her own bread. By the end of the show, the host could not resist the temptation and asked Estonian First Lady about her summer affair: “I have to ask you about this. How have the summer events changed your life?”

Following a long pause, with a trembling voice, Ms. Ilves answered: “Life goes on, I don’t know… I cannot comment on this now … I am concentrated on things that I know and that I can do. One of those things is bread.” “Did you feel like [now] there is less love in one place and more love in the other?” pressed the show host. “No, of course not. The love is only getting bigger all the time,” was the answer.

Meanwhile, the handsome young Frenchmen has not shied away from the public. He doesn’t give interviews, but is often seen in Tallinn’s nightclubs, surrounded by young girls, obviously having a lot of fun. (Here’s a video.)

Mr. Ilves, the President of this smallEuropean country, fighting his adversaries on all fronts, has no comment about the question that most intrigues the Estonian public: Does he like his wife’s new bread? 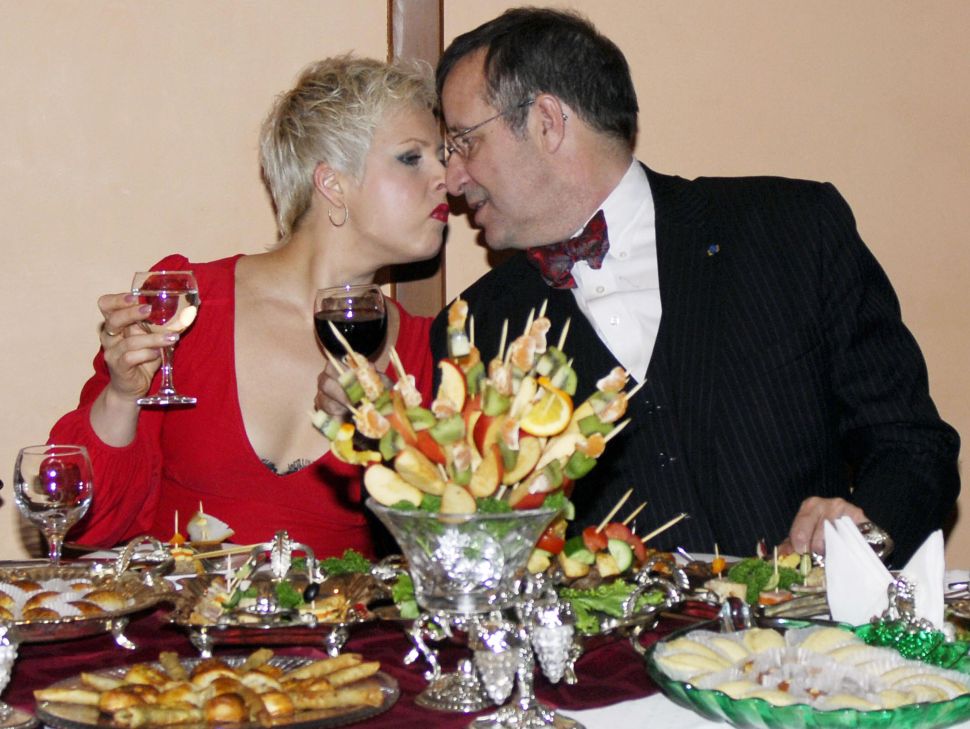