A taxi ride turned unpleasant — and dangerous — on Monday night when the glass roof of a city cab, one of the TLC’s prized “Taxi of Tomorrow” vehicles, began to shatter, literally raining glass shards onto the passengers. After the shard storm ended, the roof collapsed.

In an email from a Greater New York Taxi Association executive to Deputy TLC Commissioner Raymond Scanlon exclusively obtained by the Observer, the incident is described:  “According to the driver, he heard a cracking noise –  shortly thereafter two of the three passengers started complaining that glass was falling onto them from the roof of the car. The third passenger, a small child, was terrified. Fortunately and amazingly, no one was seriously injured.” The vehicle had been serviced by Nissan staff that same morning. No issues were found at that time.

Taxi of Tomorrow is a program designed by the TLC, which gave Nissan the exclusive right to produce all city taxis for the next ten years. Nissan won the bid from the city and was tasked with replacing 13,000 taxis driven in New York with Nissan NV200 vehicles by fall 2012. The program was delayed due to lawsuits on the basis that the TLC could not issue an exclusive contract of this kind and because the vehicle was not clean energy efficient.

Ethan Gerber, director of the Greater New York Taxi Association, has expressed concern about the program since it first began. His organization brought three separate lawsuits against the Taxi of Tomorrow, winning several rounds against it. The lawsuits successfully delayed the implementation of the program and today only a handful, around forty, of the Tomorrow Taxis are on city streets. Mr. Gerber was particularly concerned about the roof of the vehicle, which is made of roughly four and a half feet of glass, extending from above the driver’s head to just behind the back seat.

Mr. Gerber and his organization have long taken issue with the glass ceiling. In a phone call with the Observer, he explained, “It was entirely foreseeable that putting glass roofs on cabs would put passengers and drivers at risk. Cabs operate 24 hours a day, 365 days a year on uneven potholed roads that you can’t even walk on without twisting an ankle. Glass roofs are absurd in these conditions. Taxis are not tour busses. They are essential transportation that millions of New Yorkers rely on every day to get to where they need to go.” The Taxi of Tomorrow was not subject to a pilot program, so it was not previously determined that the glass roof would shatter in the way it did on Monday evening.

The TLC is now faced with what to do about the lawsuit, and the suddenly glass shard-ridden Taxi of Tomorrow program. Mr. Gerber has recommended the small batch of NV200 vehicles be pulled off the road. “It is beyond a safety issue—it is a moral issue,” Mr. Gerber wrote to Mr. Scanlon. 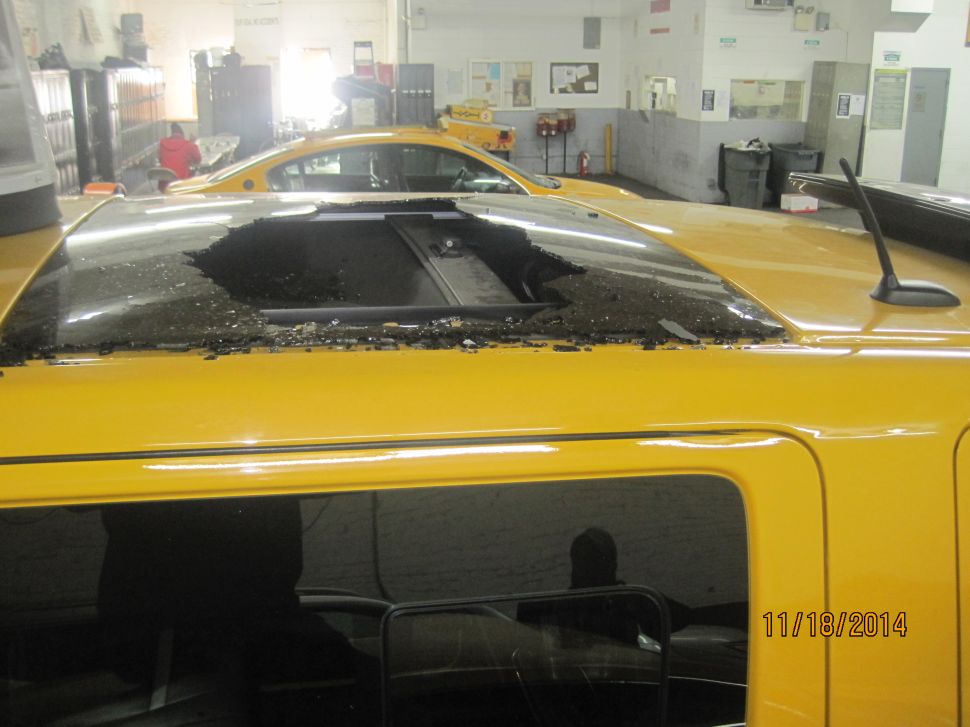