At around 4:45AM on Saturday November 15th, a woman was being verbally harassed by a man in San Francisco’s Tenderloin district. Her boyfriend asked the harasser to stop. Instead of stopping, the man followed the couple for a few blocks and stabbed the man nine times. Although the man was badly wounded, he survived and is now out of the hospital. “Catcall Leads To San Francisco Stabbing Leaving Victim With Life-Threatening Injuries” is how the incident was described on a local news site.

That is not, however, the only way to describe what happened that morning. It could also have been reported that a Jewish man was stabbed in San Francisco’s Tenderloin, but It is not yet known whether this was a hate crime motivated by anti-Semitism; or that in an apparent clash between the sleek and expensive new San Francisco and the city’s older sleazier version, a young man was stabbed while walking through the Tenderloin district early one Saturday morning; or that Ben Schwartz, a 31 year old San Franciscan, should have taken a taxi or availed himself of Uber, early in the morning of November 15th, but he and his girlfriend chose to walk, and he was stabbed as they made their way through the rough neighborhood; or that the details of the incident surrounding the stabbing of Ben Schwartz early in the morning of November 15th in San Francisco’s Tenderloin district are still not clear as a verbal altercation between Mr. Schwartz and another man, apparently having something to do with Mr. Schwartz’s girlfriend, Miyoko Moody, resulted in Mr. Schwartz being stabbed and badly hurt, and that Mr. Schwartz’s previous history includes actions and statements that evince deep frustration, perhaps even anger, about petty crime and other realities of urban American.

In a Rashomon-like fashion, all five of these interpretations can be accurately used to describe the stabbing of Ben Schwartz. It is the first one, however, that has dominated almost all of the coverage of this incident, reflecting that catcalling has emerged into the cultural zeitgeist as the newest front in the battle for gender equality. The verbal abuse many women face while simply trying to walk down the street in many cities has recently drawn substantial attention, including a video of a woman being verbally harassed as she walked through the streets of New York that went viral earlier this year.

Catcalling, however, is only one of the things that occurs in the contested, complex and uneasily shared spaces that constitute urban America. There are few neighborhoods that are more contested, complex or uneasily shared than San Francisco’s Tenderloin. Nestled uncomfortably between Van Ness Avenue—one of San Francisco’s main north-south arteries, the Financial District, the tech-dominated South of Market area and the tonier residential area of Nob Hill, the Tenderloin is a neighborhood of SROs, massage parlors, bars and alarmingly good Vietnamese restaurants. It attracts drug addicts, prostitutes, the homeless, and people trying to make it in a San Francisco that rarely gets written about anymore. It is also a neighborhood with many hard working people who don’t have a lot of money including a large immigrant population from Southeast Asia.

The stabbing of Mr. Schwartz is just one small incident on one street, but it is also a window into much of what is occurring in America’s cities. Today, divisions between techies, the wealthy and young hipsters, and immigrants, the working class and poorer people, are strong and part of the everyday fabric of many cities. San Francisco is no exception. John Yelding-Sloan a resident of San Francisco for more than four decades and a keen observer of politics and culture there, notes, “[t]here have been several stabbings and shootings lately and not just in the Tenderloin…Times are tough still for some, and rich pickings in SF now. People are being beaten, stabbed, and shot without resisting. The real story is the rash of violent muggings despite this being the new playground of the rich.”

The simmering anger between the new and old San Francisco, is often portrayed in the media as being primarily about things like Google buses and images of angry young radicals having altercations with wealthy young techies. The darker story of seniors, poor San Franciscans, the disabled and others being priced out of their city gets far less attention, but has more relevance nationally. It is certainly possible that Mr. Schwartz got caught in that economic crossfire as he may have been perceived as another rich techie, acting like he owns the city to which he just moved. That this description may not actually fit Mr. Schwartz is less significant than the possible perception itself.

Ignoring issues of rising class tensions in the city that has come to be seen by many as the Mecca of the 21st Century tech industry, as well as the enduring climate of ethnic tension and violence in urban America, and the reality that even in the age of iPhones and heirloom pickles there are still some neighborhoods where people on their way home from a party late at night need to be careful, so that a narrative about catcalling that can make middle-class people feel both comfortable and righteous is, not surprisingly, very tempting. If the problem is lower-income men yelling at women—and make no mistake about the implicit class divisions permeating the catcalling discussion—the emotions and solutions are easy, requiring education and raising awareness rather than more potentially disruptive approaches to addressing other issues facing urban America today.

The stabbing of Mr. Schwartz is a minor news story, particularly when compared to the grand jury decision not to indict Darren Wilson in Missouri and the demonstrations in many cities in the days following that decision. However, the two are not unrelated. Rather they are two expressions of the broader issues facing urban America. One is an old story of racial and economic inequality and of of policing in African American communities; the other is a newer story of cities transforming so quickly that older and poorer residents are feeling squeezed, and that feeling slowly turning into anger and resentment. Together these two stories frame much of what occurs on America’s streets in the 21st Century. 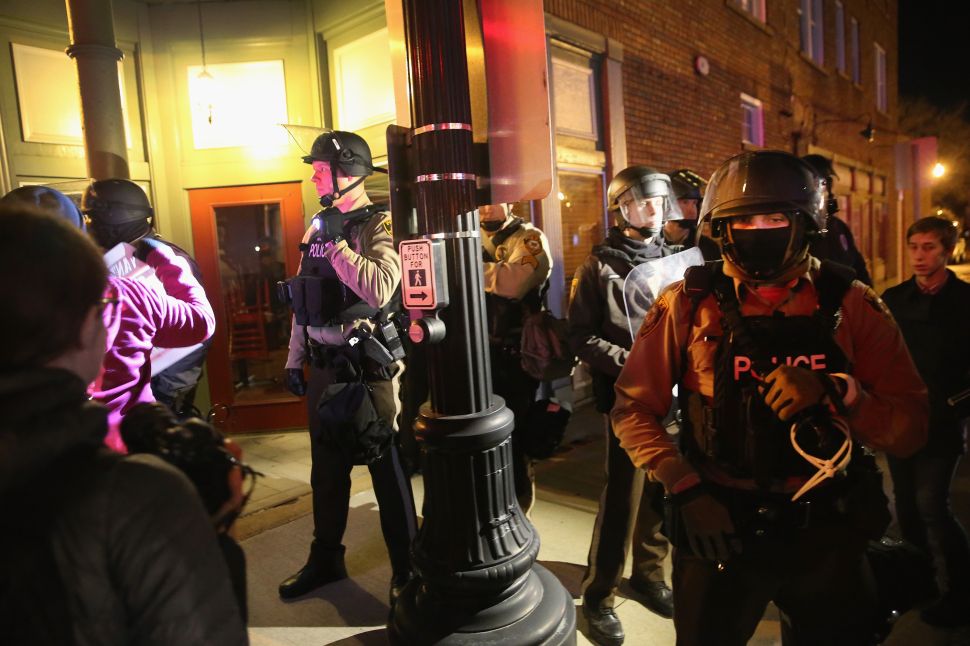