Great rivers of ghee have of late been streaming into Manhattan Valley. Golden brooks of clarified butter have been seen babbling down from the heights into an aquifer on 97th Street and Broadway. It’s an estuary of cholesterol in a precinct of octogenarians.

Ghee is to the Indian kitchen not so much what schmaltz is to Ashkenazi food but what milk and honey are to all of Christendom. And if that’s the case, Awadh, Guarav Anand’s newish restaurant on the Upper West, is the promised land.

Opened in June, the restaurant is the only one in the city devoted to the cuisine of Awadh, a region of Uttar Pradesh, a state in Northeastern India. It is a tradition, says Mr. Anand, marked by elegance and luxury. Lucknow, the region’s capital, was once home to the great Nawabs, a ruling class given over almost entirely to the pursuit of pleasure, most of it edible, some of it sensual, little of it public policy oriented. The regime didn’t last long, but while the Nawabs ruled—from 1722-1856—there was an unstinting consumption of ornately prepared meals. Ghee and eunuchs, naan and nudity, paratha and congress.

For a diner accustomed to the NOW! Indian food menu, that generic greatest hits broadsheet of sag paneer and chicken korma, the menu at Awadh can be daunting. One must venture into uncharted territories of bhargain (eggplant), gosht (lamb) and bindi (okra). Far from the curries and tikkas we love or like but most importantly know. To eat at Awadh is to explore unknown flavors, to tap into the current of a hitherto unknown yet highly codified tradition. This changing the channel is both endlessly exciting and deeply humbling. And, in this case, fucking delicious.

Mr. Anand has proven his kebab chops elsewhere. He owns not only the sole U.S. outpost of the Delhi chain Moti Mahal Delux on the Upper East Side but the kebab-centric Bhatti Indian Grill in Murray Hill. At Awadh he reprises some of his greatest hits. Among the best of them is the galouti kebab ($11), spiced lamb patties served on a disc of naan and under the solitary “O” of a slice of red onion.

According to Pushpesh Pant, the awesomely named and exceedingly erudite expert of all cuisine Indian, “The pleasure-loving Nawabs aged before their time; their flesh became increasingly weak but their yearning for good food remained strong, so the lighter-than-air kebab was devised to tempt their toothless palates.” (Paging Gibbon, Mr. Edward Gibbon.)

As often happens with the effete, the very indulgences that lead to their downfall are the legacies that outlive them. Mr. Anand’s galouti kebab comes with unimpeachable Lucknowian credentials. He got it from his mentor, Sushil Malhotra, the guy who runs Cafe Spice—remember those?—who got it from a guy named Mohammed Muslim, the grandson of Hajj Muhammed Ali, the one-armed chef nicknamed “Tunde” whose galouti kebab stand in Lucknow, now 100 years old, still serves the city’s best.

There exists, then, a direct lineage to the era of Nawabs. At Awadh the galouti kebab begins as a leg of lamb, trimmed of all fat. It is then minced six times, until it has an almost paté-like quality. Tenderized with papaya paste and spiced with a masala Mr. Anand imports from Lucknow, the meat is then slowly cooked in the nawabs’ other great innovation: dum pukht.

Every culture seems to have a low and slow cooking style. In the States, it’s barbecue. In the Levant—and the nearby Bustan—it’s taboon-baked meats. But in Awadh, it’s dum pukht, a technique by which the protein is sealed in a terracotta vessel under a layer of na’an and slowly steamed. Inside this delicious solitary confinement is a hunk of charcoal and a lot of ghee. The ghee is the mule that delivers the wood-smoke flavors into the flesh of the meat, carrying with it, as it infiltrates and cooks, the profusion of spices. Mr. Anand’s galouti kebab is infused, therefore, not just with wood smoke but rose petals, roast cumin, roast coriander, roast red chili, red and yellow chili and hundreds more spices both common and rare that he gets from a masala-whisperer in Lucknow. The result is meat of great subtlety and the realization that we’re all a bunch of dum pukhts for not thinking of this sooner.

Being, generally, those with teeth, it takes a second to get used to the cat-food quality of the galouti kebab. (Other non-minced dishes that undergo this technique, especially the murgh, are tender but not paste-like.) In this case, though, the onion helps with texture, and the flavor of the meat—which goes on and on, mild but lasting—helps too. If this is how pussies eat, I could eat pussy all day.

That’s just one triumph of a menu full of them and the only actual food I’ll mention in this review. I know, it’s insane not to say more, to not at least name check the famous crispy okra—like popcorn but better and healthier too—or the Sufiana murgh biryaani, a ghee-rich dum-pukht prepared Biryaani which is by far the best in the city. It’s almost a dereliction of duty not to exalt the unique ulta tawa parantha, an intense bread which is to regular parantha what Æbleskivers are to pancakes, and, most glaringly of all, to neglect mention of chaap ka barrah, the grilled marinated mustard lamb chops ($14), which could convert even the most lamb-averse with its graceful flavors.

Especially when one pauses to note some of the restaurant’s shortcomings—the distracting disco Buddha that sits in the corner of the restaurant when Awadh is predominantly a Hindu region, the scuffs on the menus, the flickering fluorescent lights upstairs, the front door that won’t close, and a peroxide blonde bartender who seems to lose interest halfway through making unjustifiably $14 cocktails—it seems criminal not to say more about the divine food.

But that is the enduring blessing and promise of Awadh. One is left wanting always to say more about it, to learn more about the culture from which the cuisine comes, and, most importantly, to return night after night, pretending to be the last of the nattering Nawabs. 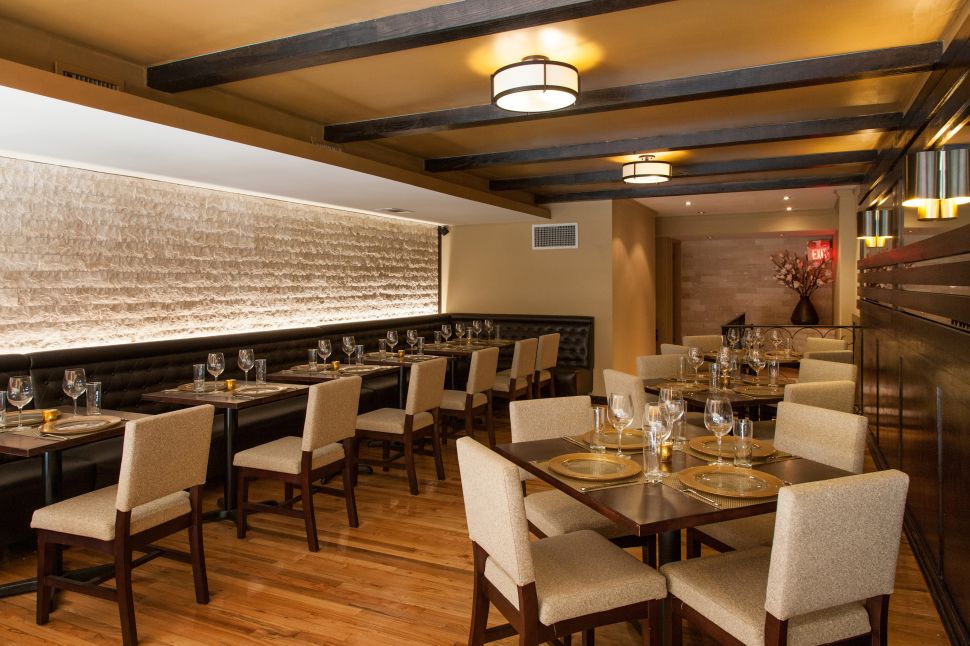