Having opted out of running for re-election this year, Perth Amboy Councilman Ken Gonzalez left his seat tonight to claim a

“I am feeling very humbled to have been appointed as a new part time Municipal Court Judge for Perth Amboy tonight by the Mayor and my fellow council persons,” Gonzalez said in a statement.

“While I am going to be sorry to leave the City Council next month, I am looking forward to continuing to serve the City of Perth Amboy in this new position starting in mid December,’ he added. “By the way, this is a part time position so I will continue to practice law in my law office in all areas except municipal cases and criminal cases. Feeling blessed tonight.”

Running on a ticket backed by Mayor Wilda Diaz, Gonzalez won his council seat in 2010.

He did not pursue re-election to a second four-year term. 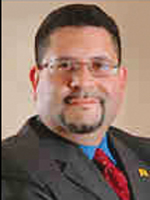