So baby Batman beat the shit out of a bully. And it was awesome. End of review.

Except it can’t be! Because this is Gotham, the highest highs must be coupled with the lowest lows. Let’s start with the lows, huh? Barbara, Barbara, Barrbara, I praised you last week. You didn’t do much but you did something. Now it’s back to your apartment to not wear pants, drink too much wine and nearly shoot your husband who is busy doing his job. And for anyone who defends her with “but she’s stressed, she went through something last week,” need I remind you that she was out of town and perfectly safe, but had the GENIUS idea to come back, personally lie to Jim, and go face to face with the largest crime boss in Gotham by herself? How is it supposed to be a big moment this week when she leaves Jim a note and skedaddles, when I (and assume most people) am screaming at my TV “Yes! Go! Go!”

But did I mention little Bruce Wayne went NUTS on his classmates face? (More on that classmate in a little.) It’s hard to be too mad when that happens. And how cool is Alfred? The most important thing Gotham can do, as far as I’m concerned, is muddle with DC history to remain interesting, and having Alfred be a stone cold badass instead of a mild-mannered butler is top notch. It’s like Geoff Johns’ Earth One Alfred, and I LOVE Earth One Alfred. Bruce asking Alfred to teach him how to fight was a fantastic moment. If Gotham wants to throw in a Bruce-Alfred training montage I wouldn’t be mad, preferably set to ‘Hearts on Fire.’

Meanwhile, the show returned to a “villain of the week” format, but it was a good one. (More on that villain in a little) I got a real updated Burton-esque vibe from the group of beaten up business people watching the final Jim v. candidates fight on a screen. And probably most importantly, there seemed to be actual strides in making the GCPD not a complete corrupt shithole. Success! After literally every single officer left Jim behind when Victor Zsasz showed up, I actually wrote in my notes “okay, that’s like too corrupt.”

As always, let’s run down every reference, fact, and nugget of Bat-history brought up in episode eight,“The Mask.”

So who is that classmate? Tommy Elliott?

Tommy Elliott is kind of a big deal, you guys. They’ve changed his history a little, because in the comics he was a childhood friend of Bruce Wayne, not a childhood punching bag on which Bruce Wayne can unleash his orphan rage.

Thomas Eliott plays a huge part in one of my favorite Batman stories ever ever ever, Batman:Hush. Thomas Elliott is painted as sort of a bizarro Bruce Wayne, also growing up with money and no parents. However, they differ slightly in the fact that Thomas murdered his parents and is fucking insane, y’all. I don’t want to give away too many things from Hush because there’s so much and I don’t condone comic book spoilers (which I give away every single week in these things), but if Gotham runs for about 20 more seasons we will definitely see Thomas Elliott again.

Also, kudos to whoever cast that kid as a bully we’re supposed to want to see Bruce Wayne punch in the face. Like, I don’t like disparaging child actors but man, I want my butler to teach me how to punch that kid in the face. (Ed. note: I don’t have a butler.)

And who is that villain? Richard Sionis?

Sionis, owner of Sionis Investments and lover of vaguely Asian masks and bloodshed, is technically not from the comics, but his name and hobbies are. The name Sionis is synonymous with the villain Black Mask, but that honor goes to Roman Sionis. Of course, Roman’s black mask is less samurai and more spooooky skull.

So I really like to think Richard Sionis is like, the father or uncle or something of Roman Sionis, because Black Mask is supposed to be a Batman villain not a Gotham villain. And that’s a good thing! I was starting to think Batman was just going to have to go around punching 60 year old men in the face.

Is Anders Prep named after anybody important? 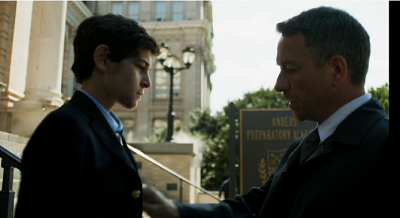 Bruce Wayne tries out actual schooling at a place called Anders Prep, which I can’t imagine why. That solitary room with the constantly lit fire in the Wayne Mansion seemed to be doing wonders for his young psyche. Anywho, unless there’s an Anders Prep in New York I missed in my prep school days that I just made up, this is a Gotham creation. It’s most likely named for Nicholas Anders, created by Scott Snyder. Nicholas moved to Gotham in the 1800’s, and decided at a young age that the city’s skyline was missing so many gargoyles, so he became an architect and basically designed modern day Gotham City.

Now that, ladies and gentleman, is how you reference guide. 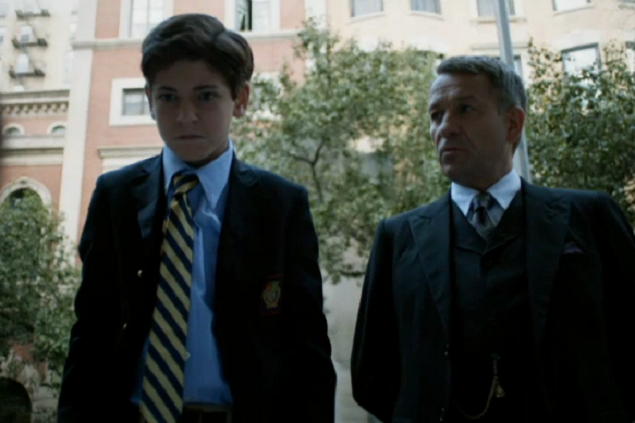