Last Wednesday night, ferried loads of hipsters in the outskirts of Red Hook at Pioneer Works, an innocuous-yet-imposing former factory that one imagines contains scores of construction equipment, dead bodies of mafia squealers. In actuality, the space is used as an artist’s residency and event space, such is the New Brooklyn. Indie celebs like Oliver Platt, Amy Ryan and Jon Glazer waited in line at the indoor taco bar before settling down for the night’s event: the premiere of new episodes of cult hit High Maintenance.

Created by husband and wife team Ben Sinclair and Katja Blichfield in 2012 and released on Vimeo (which since acquired the show as their first original program), High Maintenance isn’t your average web show. It’s production values are much higher quality than the usual YouTube fare, and it boasts an unusually high number of indie celebrities, including Hannibal Buress and Downton Abbey‘s Dan Stevens.

It’s also, along with a handful of other programs changing the game right now for original streaming content, just an incredible piece of art that doesn’t seem to fit the traditional criteria of “TV.” Each episode, which can range from several minutes to almost a half an hour, is its own character study of life in Brooklyn: the only thing connecting each story to each other is that everyone in the show uses the same weed dealer, played by Mr. Sinclair. Looking like a cross between John Malkovich and a happy koala, “the guy” (as he’s known) sometimes plays a pivotal part in the episode. Other times he shows up just long enough to make a sale and smoke a bowl.

Now in its 5th cycle–you can buy the whole series for $7.99— High Maintenance is making us rethink what it is we’re really talking about when we talk about the Golden Age of TV. We decided to go straight to the source and ask the creators of the series themselves.

Observer: The three latest episodes all feature characters we’ve seen in other High Maintenance episodes. Was it always the plan to have these singular stories expand into a broader universe?

Katja Blichfeld: That wasn’t originally our intention, no. It’s evolved over the last couple of years, and it’s still coming into focus for us. It comes about from wanting to work with people, to just literally hang out with them and be in their presence.

Ben Sinclair: And now it’s great because I can just literally use the show as an opportunity to catch up with my friends I haven’t seen in awhile, like Avery (Monsen, who plays the recurring character Evan; an asexual clown). We just keep expanding.

Observer: And this is the fifth season of the show, right?

BS: We call them “cycles,” because they have nothing to do with seasons. We’re not on some Q1, Q2 shit! This is an art project! We’ve gotten no pushback from the executives at Vimeo, and they have this trust in us and what we’re doing that’s really inspiring to work with. I don’t even think they’d seen the episodes we screened before we put it in front of an audience.

Observer: Seems like the kind of artistic freedom a lot of TV writers would kill for.

BS: If we walk away from this project saying “There exists an avenue where you can own your content afterward and still keep 90 percent of every dollar that comes in from your viewers” that’d be very cool. Sometimes we’re at parties and with way more seasoned TV veterans and tell them the outline of our deal, and they say “WHAT? Excuse me?” Because it just doesn’t exist. And these people (at Vimeo) are extremely vanguard, so it’s very cool to be on the Blue Team. They’re artist-friendly. They make their money off of people being creative. That’s where their bread and butter comes in, from people purchasing pro-accounts so they can put their videos on demand. It’s not from advertisers. So we don’t get in trouble for saying the F-word while like, eating a Hot Pocket.

Observer: Has the fact that you guys have a show online, where people can comment and create this immediate visible feedback right under the video, change the way you approach writing the show?

KB: We write very much in a bubble; we don’t incorporate fans reactions at all. We wanted to make something fun for us. And that hasn’t changed. Even with a little more money on the table, that hasn’t changed. Sure, there’s a little bit more pressure. Would we LIKE to make enough money to be homeowners? Of course. But this was never going to be the project that would beget those things. We still don’t think that. This is an art project.

BS: Ideally, we could do this for the rest of our lives. We could make our money doing movies, commercials, whatever the client wants. But this…this is ours. And we’re going to be making it to our standards. Maybe that’s what people are responding to. It’s not trying to please everyone. It’s like dating: the sexiest person in the room is the one who looks the most needy.

Observer: That’s certainly not the traditional attitude of writers in television: that it’s art, that it’s this auteur vision. Do you think that’s where the TV landscape is heading?

KB:  It is, but it’s also hard to imagine those mega-successful shows like CBS sitcoms going away anytime soon, just because they make so much money for everyone involved. However I believe there’s this new market emerging, that’s going to be slightly less profitable probably, but still one where an artists can make a living.

BS: Like indie movies moving out of movie houses and moving online.

KB: But if you look at shows like Transparent, Orange is the New Black, House of Cards…

KB: Right, it’s much more works of auteurs. Of a single vision.

Observer: You guys write every episode together. What is that process like?

KB: Some of the time, it’s that we’ll come up with a climax and then think, “Who would that happen to?”

BS: We’ll come up with ideas in the shower, or on walks. It’s a very organic process. We’ll go over the story structure again and again, talking out loud about it. Just talking talking talking. Then it falls onto paper in the last minute.

Observer: That sounds like the best collaboration in the world.

BS: It’s very intense. I wouldn’t say it’s the best. Well, not all the time.

KB: There are days when you’re like “Ugh, I just want my husband right now; not my writing partner or my business partner.” Or vice-versa.

Observer: Do you guys consider what you’re making “television”?

KB: I’d call it a series of shorts.

BS: Yeah, it’s not TV. I don’t even like when people call it a web series, because what does that even mean anymore? Everything is on the web. Everything will just be a series, eventually. Appointment viewing TV is over. Everyone knows it’s over. I can’t imagine going “Oh yeah, I totally need to make sure I’m home by 10 pm sharp so that you can sell advertising to me.”

Observer: New York’s TV scene is in kind of a renaissance right now. What would you say for people trying to break into the industry in the city?

BS: David Lynch said once that just because the paper and pen was invented didn’t mean there was suddenly this proliferation of great short storytelling. So just because everyone has a DSLR camera doesn’t mean there’s going to be this explosion of great content. For any New Yorkers who want to write or produce just because they have the ability, I’d say they should be judicious. Ask “Am I feeling great about this on the thirtieth time that I’m watching?” 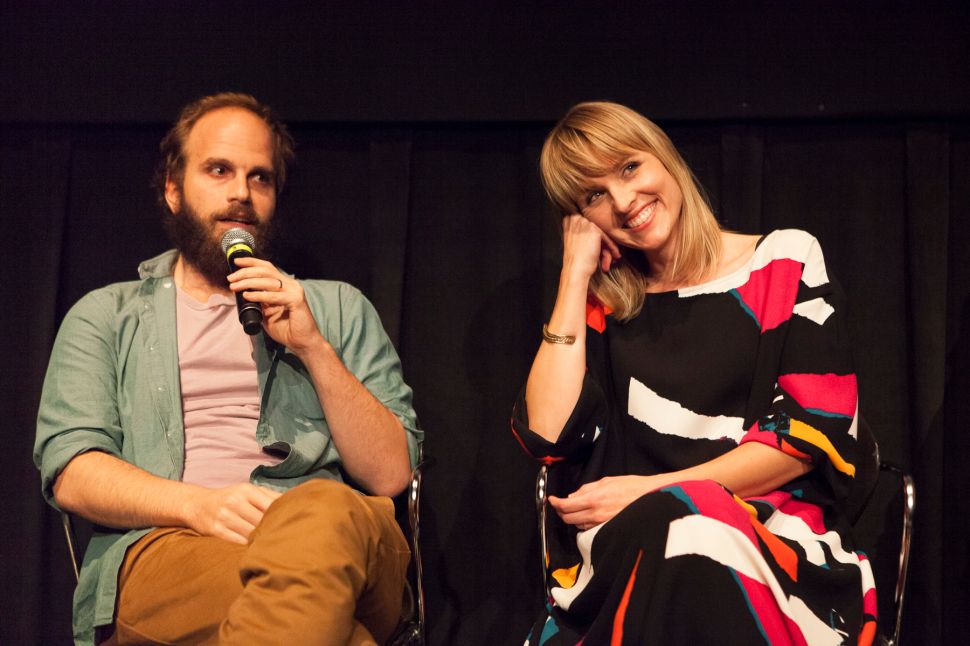