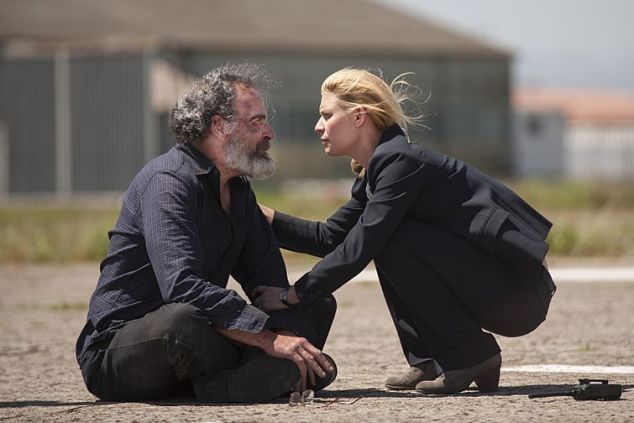 “Stop being such a Carrie, Saul!” (Showtime)

“What the fucking fuck!?” That’s what Lockhart says when he sees that the motorcade was hit by two RPGs and what I also said several times during this episode. Last week Saul got recaptured while he was on the phone with Carrie. This week Saul gets caught in an explosive fireball as soon as he says hello to his wife on Redmond’s phone. Holy crap, this was a good one. There were some very intense moments and some real satisfying ones but in the end we still don’t know if Saul’s alive. But he must be, right?

Let’s start at the beginning. My hatred for that worm of a man, Dennis Boyd, has soared to new heights, approaching King Joffrey Level. Mark Moses, the actor who plays Dennis Boyd, is very talented at the craft of making me yell “asshole” at the screen. Tasneem is no slouch in the hatability department either. They both are amazing at making the facial expressions of a complete dick.

So Denny has his back up against the wall. A vengeful, clear-thinking Carrie has him in the interrogation room and he has the balls to think he’s walking away from this. Not happening, big guy. Or is it? I have to admit that I was fooled when Martha came in to save Dennis. It seemed likely that she might be offended that he was being detained and find it hard to believe that her loser husband would be capable of espionage. But Martha is no fool and hates Dennis more than anyone. She is more than happy to have him thrown in a cell after he tries to take off from the embassy claiming he needed to “grade essays” but carrying a bag packed with clothes, cash and a passport. Even still that jerk won’t talk until it’s too late. When he does, he only fesses up because he’s afraid for his own stupid life. It didn’t occur to Dennis that telling Tasneem about the secret entrance to the embassy could ever have negative consequences. Well, now Haqqani is coming, dipshit and he’s not going to care what baby pictures you stole from Carrie’s apartment. If Haqqani kills Dennis Boyd in addition to Aayan he will be my favorite character on the show.

The hostage exchange was the most stressful. It’s all looking bad from the beginning. Tasneem is being extra smug like she’s sure she’s screwing over Carrie. The not-so-secret call between Khan and Carrie solidifies that something is up beyond the release of five dangerous terrorists. Tasneem totally caught that convo, too. That’s going to come up later.

During the actual exchange it really looked like Saul might die. It would have been a bolder move than I’d expect from Homeland but Saul had expressed numerous times that he was ready to die. Haqqani didn’t really look like he wanted Saul go home alive either. The way Saul was connecting with the kid who was watching him also made it look we were getting set up for a goodbye. When the kid puts on a bomb vest to avenge his dead family who had been droned while Saul was CIA Director, I’m mentally preparing myself for no more Saul. Only when Saul refuses to get up, yelling, “blow them all to fucking hell!” we know he’s probably safe. When Carrie risks her life to convince Saul to get up, it’s all good, for the moment. That was an amazing exchange where Saul doesn’t think he can live with being exchanged for the release of terrorists and is willing to let the young boy blow himself up. It sounds cold but the guy has been a bit stressed so let’s cut him a little slack. In the end Saul never can say no to Carrie so the exchange is made.

It felt like a complete episode. I didn’t need any more tension or action. It’s time for a nice emotional moment between Saul and his wife on the phone. Won’t that be touching? Kablamo, no dice, saps.

We don’t know who survived the RPG explosion. I’m still convinced that Saul is going to be integral part of season five and since he was sitting next to Carrie he has to be still alive, right? Redmond might be dead though. Somebody will have to die in that explosion.

My only problem with this episode is that there appears to be a lot of security at the embassy. It seems hard to believe that Marines would leave it completely unprotected. Also, it should take a lot more than a bolt cutter to get into the embassy. Even with people like Carrie and previously Sandy using the secret tunnel to get out undetected by the ISI there’s no way anybody would feel safe being protected by a single Master Lock. Eh, who cares? It’s kind of dumb but if we get to see a Quinn/Haqqini showdown next week, I’m in. 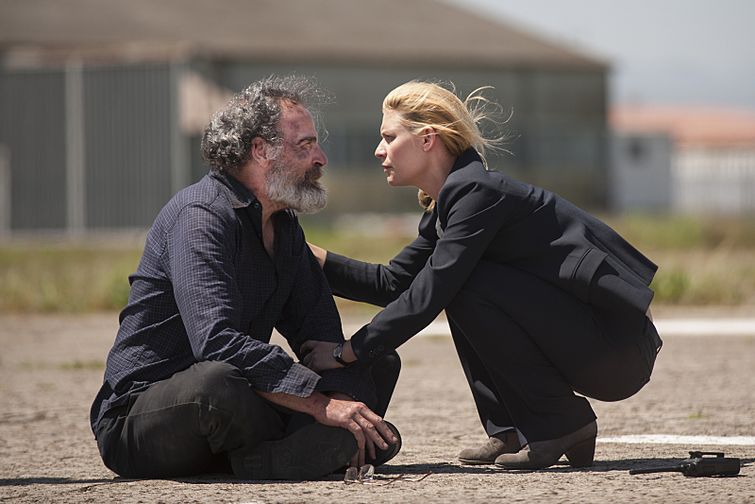