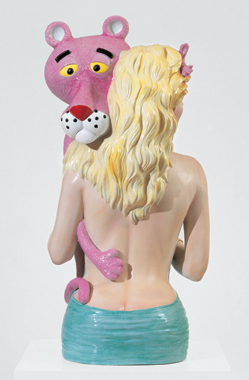 Even the urinals fetched $3.5 million.

“It’s the consistency that blows my mind,” said Alex Glauber, a New York art advisor. He called the preponderance of eight-figure prices “desensitizing.” “I would say that it’s a decidedly good time to sell art, especially at a Christie’s evening sale.”

Christie’s counted more than 500 bidders from 43 countries. A client of Isabelle de La Bruyere, a London-based Christie’s senior director, paid $81.9 million for the top lot: Andy Warhol’s huge Triple Elvis [Ferus Type], a silkscreen of a publicity shot of Presley from the 1960 movie Flaming Star. Warhol’s Four Marlons, of Brando from 1958’s The Wild One, made $69.6 million. Both were guaranteed by Christie’s and had been off the market for nearly four decades. 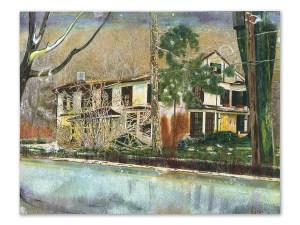 Peter Doig’s Pine House (Rooms for Rent) set a record for the artist at $18 million.

A 1970 Cy Twombly of squiggly lines, part of his blackboard paintings, also realized $69.6 million. It nearly doubled the low presale estimate. The record Ruscha, Smash, a sunshine-yellow example of this text paintings, went for $30.4 million. (A price range that is almost the new normal in this set.)

The aforementioned $3.5 million urinals, created by Robert Gober and non-functional, were actually a disappointment relative to the rest of the sale. They fell short of their high presale estimate of $4.5 million, but did okay since 1996, when they sold for $145,500 at Christie’s. The artist is having a retrospective at the Museum of Modern Art.

Christie’s triumph contrasted with Sotheby’s mixed $343.6 million sale Tuesday night. That one landed just above its low estimate, while Christie’s surpassed its high estimate. Just five of the 80 lots didn’t sell at Christie’s. Daniel Loeb, the activist investor who won a Sotheby’s board seat earlier this year, left moments before Christie’s biggest flop: Keds, Roy Lichtenstein’s early pop art painting of high-top sneakers, which was estimated at $20 million. Ironically, the preceding lot, Elaine Sturtevant’s Lichtenstein, Frighten Girl, which to the
untrained eye looks like an actual Lichtenstein, set a record for Sturtevant, who died this year. It went for $3.4 million, nearly five times what it fetched at Phillips three years ago.

“There was a lot of electricity in that room,” said Joanne Heyler, the director and chief curator of the Broad Art Foundation. “It felt bubbly. We’re in a time when anything much under $10 million is a ho-hum lot.”