It was a red dawn in the New York State Senate and across America, but voters here were also seeing plenty of green.

Howie Hawkins, the Green Party candidate for governor, won 5 percent of the vote last night–a historically high number for a third party candidate and enough to move the Green Party up the ballot, to Row D, for the next four years. In a conference call with reporters today, Mr. Hawkins promised to help build the party in a way to run competitive elections across the state in the coming years.

“I think it’s safe to say we’re the third party in New York politics,” he said. “Only the three of us, Democrats, Republicans and Greens got that ballot by running our own candidate.”

“The election was one event and the politics is a process that continues,” he added.

Mr. Hawkins was taking a dig at the numerous third parties in New York who cross-endorse candidates, like the left-wing Working Families Party or hard right Conservative Party. Mr. Hawkins won more votes on his Green Party line than Gov. Andrew Cuomo did on the WFP line, allowing the Green Party to leapfrog the WFP on the ballot–a relevant accomplishment on a ballot jam-packed with many minor parties.

Mr. Hawkins said he will go back to the donors who funded his gubernatorial bid and tell them to contribute to the Green Party so they can build the field organization needed to compete against Democrats and Republicans. After running a more bare-bones, symbolic campaign four years ago, Mr. Hawkins was able to pay for staffers and operatives this time around to vastly improve his vote total.

“We want to organize county organizations in every county,” he said, also pointing to liberal New York City as a place where the far left party can grow.

“I was talking with our supporters in Bronx County. Turnout there is so low and the perception of party insiders in the Bronx is they feel they can run good candidates.”

Mr. Hawkins, a Syracuse resident, wouldn’t rule out another run for governor, but insisted the party has a deep bench of candidates. He also said he would continue to advocate on several core issues–more funding for public schools, a higher minimum wage and a ban on hydraulic fracturing–in the next legislative session.

He said he was still open to an alliance with the WFP, which is also trying to strengthen the political left in New York State and resents Mr. Cuomo. But his campaign manager, Ursula Rozum, cut in to point out he had offered himself as a candidate on their party line this year and was rebuffed.

“What we’ll have to do is get more Green voters,” he said. 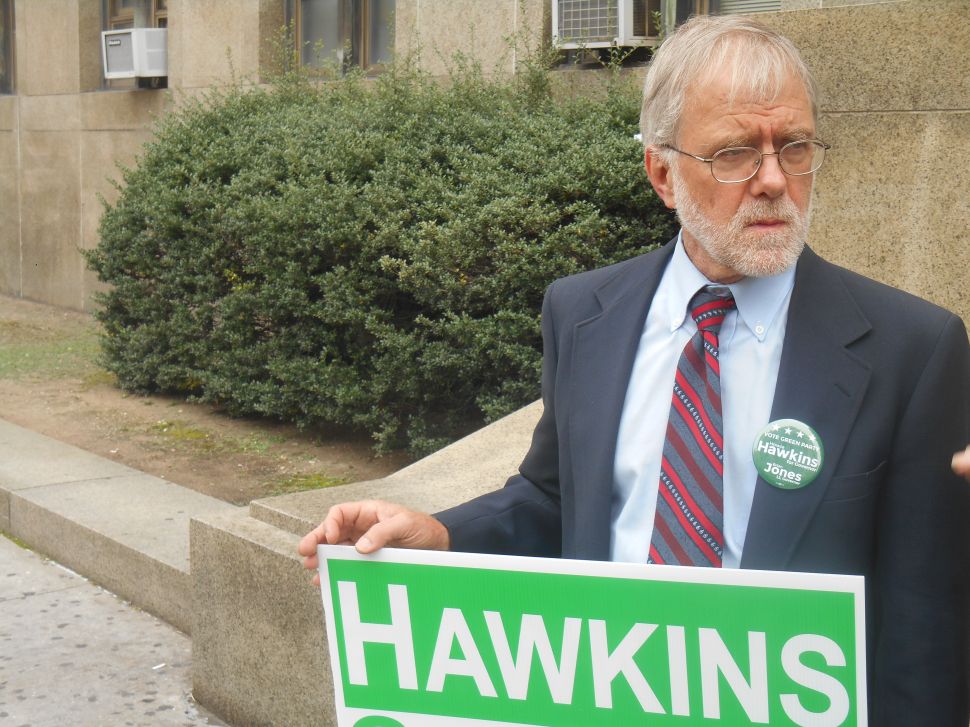