Seeking to capitalize on frustrations over President Barack Obama’s tenure — and refusing to be out-competed by their Democratic counterparts, as they have in years past —  Republicans have focused much of their efforts this election on widespread voter turnout, using the aforementioned methods to drive out not just hardcore supporters, but those who might not otherwise feel compelled to visit the polls on Tuesday.

It’s a markedly different strategy than what the party has seen in previous years, Bell said, and one that suggests Republicans are committed to challenging Democrats in a get-out-the-vote game long dominated by the latter.

“I think that Republicans have caught on,” Bell, who’s running against U.S. Senator Cory Booker  and says he’s “very happy” with the party’s efforts this year, told PolitickerNJ. “A lot of their earlier effort in the counties and with the state party was oriented to getting people who don’t normally vote except in presidential years, and just send them a postcard, send them a vote by mail. They figured that was easier to motivate them than trying to start a whole new habit of voting in off-year elections.”

Instead, this year Bell said Republicans have stressed the need to increase voter turnout in general, urging voters through aggressive ground campaigns to get out to the polls and using mailers to make clear what’s at stake in this election. That includes pivotal issues in local races, like higher taxes in Bergen County’s contentious executive and freeholder races, but also broader ones in state and federal races, like Republican control in Washington in South Jersey’s third district congressional race.

Throughout all of these races, one of the main messages Republicans have sought to emphasize is the need to reverse the last eight years of Barack Obama’s presidency — an issue that they think might lend them the advantage in energizing voters this year.

“The rationale is that this is a presidential-type year, de facto, because Obama’s policies as he said himself are on the ballot, and that this is the only way to register your view of the trend in the country,” Bell said. “So I think it’s a very effective program.”

More than an effective program, it’s a change that reflects a trend going on in states across the country, where Republicans have begun to realize the importance of an modernized, nation-style ground game, even in off-year elections. That has long been a signature strategy of Democrats, a party well known for their aggressive voter outreach programs, but Republicans have now also caught on, employing technology-driven methods like automated phone banks and data-collecting phone apps to keep track of outreach and get voters to the polls.

In Burlington County, home of two of the most competitive races in the state, Republicans also find themselves engrossed in their biggest voter outreach campaign to date. With just two days before the election, Republicans are in full-battle-mode, banging on doors and making round-the-clock phone calls, according to Burlington County Republican Committee Chairman Bill Layton.

At stake is Republican control of the freeholder board, where incumbent Bruce Garganio and Mary Ann O’Brien are facing challenges from Democrats Tom Pullion and Mike Schmidt, as well as the district’s congressional seat, where Tom MacArthur finds himself in a high-profile battle with Democratic hopeful Aimee Belgard in CD3.

“We’re not holding anything back. And I can’t speak for the whole state, but I know in Burlington County we are very focused on making sure our voters get out to the polls, and we have a program in place that is probably the largest get-out-the-vote program we’ve ever had in Burlington County,” Layton told PolitickerNJ. “We have hundreds of people everyday at our headquarters.”

Layton called this year’s voter outreach program the “most sophisticated” the county’s ever seen, with ID phone calls, door-to-door ground campaigns, mailers, and absentee ballot chases. Over the next two days, he said, volunteers there aim to knock on roughly 40,000 doors and make some 100,000 phone calls.

“In terms of our operation, I don’t think we’ve ever done more,” he said.

Bell — who’s run for U.S. Senate twice before, once in 1978 and later in 1982 — said the strategy has also emphasized a unified party, with mailers paid for by the NJGOP that promotes the entire Republican ticket, from his own campaign to the congressional races down to the freeholder level.

“The Republicans have not been outclassed in the turnout game this year,” Bell said. “They have a very good turnout.” 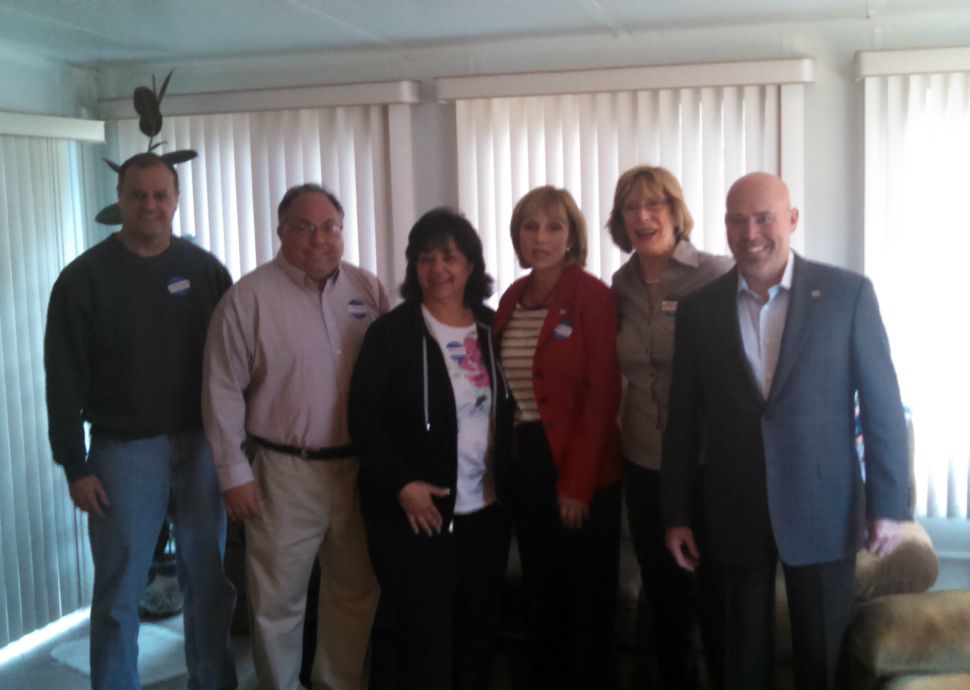