Israel is the great battle of our time. The question all diaspora Jews face is whether Israel’s name and reputation will survive into the next decade. Never before has the world ganged up on the Jewish state like now.

We all fear that terrorist organizations, or perhaps an Iranian nuke, will destroy Israel. Those are legitimate fears, seeing how passionate Israel’s enemies are about her annihilation. And yet Israel seems eminently capable of defending itself.

But what if Israel’s economic lifeline is threatened by global boycotts and divestment? Winston Churchill’s greatest fear for Britain during the Second World War was not a German invasion. He was confident in the RAF and Royal Navy’s ability to turn the Nazis back. His real fear was economic starvation by German U-Boats sinking British merchant shipping.

Nobody asks young American, Australian, European, and South African Jews to don the olive green uniform, dodge grenades, evade bullets and fight in Gaza. But we do ask them to be warriors for Israel on campus, the very locus of Israel hatred in Western culture.

But students need to be led. They need to be inspired with the courage to stand up proudly and resolutely for Israel.

Which brings us to the world’s most successful Jewish outreach organization: Chabad.

This week Chabad emissaries will gather from remote corners of the world for the annual Kinus Hashluchim global gathering of emissaries. When I started attending 25 years ago, the campus contingent was tiny. There were perhaps twenty of us in the room. Today there are hundreds.

Much has been said, and I have personally written a great deal, about the need for Hillel to stand up for Israel on campus, to state boldly and proudly they are not just pro-Israel but actually fight for Israel. This obligation is even more incumbent upon Chabad.

Many Chabad Rabbis to whom I have spoken, and whom I have respectfully called out for not doing enough to actively support, promote, and defend Israel on campus, have told me that this is not their job. Their job is to promote Judaism. They don’t wish to be political.

No one did more to promote Judaism to secular audiences than the Lubavitcher Rebbe himself. And no one argued more passionately in public – even when it hurt his reputation and undermined Chabad fundraising – that Israel must take the strongest measures to defend itself and not continue to cede land to those who seek its annihilation.

A month ago the president of the Palestinian Authority, Mahmoud Abbas, came to Cooper Union’s Great Hall, where he spoke to approximately 1,000 students, mostly from New York University.

Praised as a moderate, at least in comparison to Hamas, Mr. Abbas accused Israel of genocide in Gaza. Four days later, he repeated that charge at the UN General Assembly.

My son Mendy, an undergraduate at NYU who had just finished his Chabad smicha, took five of his siblings to protest. He sought to enlist mainstream Jewish groups on campus to protest Abbas’s demonization of Israel. Mendy’s small protest was not in vain. The media interviewed him extensively and his message defending Israel was broadcasted far and wide.

I decided, as a parent, that there should be an appropriate response to the Palestinian Authority president falsely accusing the Jewish state of heartless slaughter. I approached my friend and mentor, Nobel Peace Laureate Elie Wiesel, and asked him to speak on a panel so he not only could refute the monstrous allegation but also talk about why the Jews are perennial targets of genocide, both as victims and now as purported perpetrators. Are we living in an age of new anti-Semitism?

I then invited my friend Samantha Power, the American ambassador to the UN, who wrote the most important book on genocide, the Pulitzer-prize winning A Problem from Hell, to introduce Prof. Wiesel. Samantha, who is pretty busy rescuing a fallen world, graciously agreed.

Finally, I turned to my former student and dear friend, Professor Noah Feldman of Harvard, one of America’s greatest legal scholars, to join the discussion.

It was all set. The announcement of the event immediately garnered all the usual attacks from anti-Israel sites all over the internet. We knew it would be big. Now we only had to get the students.

Unexpectedly, we met even more opposition from Jewish groups on campus than from Palestinian ones. Jewish groups would not send the simple ad to their mailing lists. They gave excuses. They said it was late. They were traveling. But one student leader told me exactly how he felt.

“Israel is political. Our job is to create a Jewish environment for the students and bring them closer to tradition. Why would I risk being divisive by standing up for Israel? We stay away from politics.”

I responded, “Standing up for Israel on campus is not political, it is not Jewish, and it is not Zionist. Rather, it is righteous and it is just. It is the supreme expression of love for freedom, human rights, and democracy.

“As far as the Jewish people are concerned, defending Israel it is the ultimate statement of Jewish pride. Israel is the sum of Jewish hopes and dreams. When we stand up for Israel we celebrate our national aspirations for peoplehood.”

It was becoming a battle. Mendy, who had been given responsibility as the event’s chief student organizer, was growing disillusioned. He knew before he arrived at NYU that he wanted a principal form of his student experience to be Israel advocacy and defense. Now he was in the thick of things. NYU has more Jewish students than any other private university in America, but he had to fight with Jewish organizations to promote Elie Wiesel!

Mendy ultimately decided to circumvent the Jewish organizations and go directly to the non-Jewish mainstream and political organizations, which were only too honored to host Elie Wiesel, and helped to fill the hall to capacity. Cooper Union sent a mailing to every student.

But if you’re wondering why Israel is being hammered on campus, look no further than this story, which repeats itself at universities worldwide. While the Palestinian students stand up proudly for their side, accusing Israel of all kinds of abuses, Jewish organizational leaders are afraid of being “divisive,” of being marginalized as defenders of an unpopular regime, and of being accused of defending human rights abuses. In their fear, they cede the campus to anti-Israel activists.

As we’re doing in our event at Cooper Union/NYU, we must bring the fight to our enemies. No longer can Jewish students only play defense on campus. We must force Israel’s haters to defend the record of Hamas, with its honor killings of women and extrajudicial killings of gays.

We’ve long witnessed the “moderate” Mr. Abbas naming public squares after Palestinian terrorists whose hands drip with Jewish blood. He posthumously bestowed the “Star of Honor” on Abu Jihad, the mastermind of the 1978 Coastal Road attack, where 38 Israelis, including 13 children, were killed, calling him “the model of a true fighter and devoted leader.” He named a public square after Dalal Mughrabi, the Palestinian woman who led the attack, in 2011. Last August, Mr. Abbas gave a hero’s welcome to Palestinian murderers who were released by Israel as a goodwill gesture.

Now comes the news that Mr. Abbas’ response to the recent shooting of an Israeli-American activist in Jerusalem by a Palestinian terrorist was to write to the murderer’s father, praising his son as a Palestinian hero.

All this from the man who received an ovation from NYU students.

Ignorant celebrities like Javier Bardem and Penelope Cruz, along with fallen feminists like Naomi Wolf, have been parroting the malicious libel that Jews are engaged in genocide. What better way to destroy the State of Israel than to make it impossible to defend itself?

But trivializing genocide does not just touch the six million dead in the Holocaust. It trivializes the 1.5 million Armenians slaughtered by the Turks, the 2.5 million Cambodians murdered by the Khmer Rouge, the 800,000 Tutsis murdered by the Hutu, and all the innocent victims in Croatia, Serbia, and Kosovo.

This Monday, November 17, we will go beyond protest and organize a public response. And there’s no one better to respond to Mr. Abbas’s blood libel than the world’s foremost voice against genocide, Elie Wiesel.

Rabbi Shmuley Boteach won The London Times Preacher of the Year competition and has just published Kosher Lust: Love is Not the Answer. Follow him on Twitter @RabbiShmuley. Tickets for “Genocide and the Jews: A Never-Ending Problem” on November 17 are available at www.shmuley.com and www.thisworld.us. 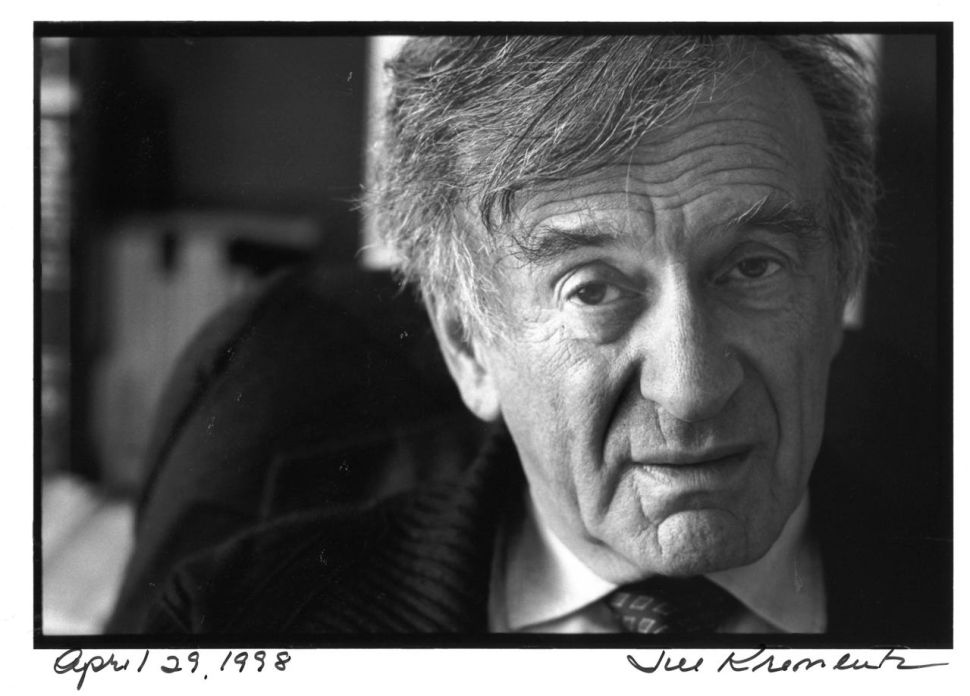