Last night upon walking into The Four Seasons, it seemed as though Aby Rosen had found a suitable replacement for the giant Picasso that he ordered be taken down after a half century. There, in the same place where the twenty-foot-tall Le Tricorne once hung, placed on eight daises, were eight Birkin Bags, the pricy Hermès arm weights illuminated as if they were art.

Which, as it turns out, they were: Jeff Koons had taken the bags and turned them into Readymades, set to be auctioned off for well more than the off-the-rack price. The bags now constitute a work by Jeff Koons called Birkin Bag (Shelf).

But the status symbol accessories were hardly the star Koons work of the night: for its inaugural auction supporting the United Nations Foundation’s Shot@Life campaign, Project Perpetual was to sell one of his “Gazing Ball” works, several of which were displayed in the well-documented “Jeff Koons: A Retrospective,” and there it was, in the center of the Pool Room, ready to be ooo’d and ahhh’d at by paddle holders.

Before dinner, Mr. Koons was standing near the bar in the Grill Room, and I asked him about what it’s like to have a sculpture displayed in such an iconic space. He responded with his usual gnomic platitudes, as if he were giving a slightly evasive, half-baked Koons-themed powerpoint presentation to suits in a conference room.

I asked if he considered himself an iconic American artist.

“My cultural history, I’m an American artist, but I really consider like to think of myself as an international artist,” he said. “I believe in a universal vocabulary. I’m so thrilled and honored to be able to have a platform to work from, to try and show how I believe art can enlighten and empower people, and to be part of the dialogue. I couldn’t ask for a better platform.”

Noted. Eventually, the whole crew migrated from the Grill Room to the Pool Room, where unexpected Koons fan Drew Barrymore joined the usual cadre of art totems: Hans Ulrich Obrist, Jeffrey Deitch, Larry Gagosian, a smattering of Mugrabis, etc. We were seated between Nate Lowman, who was carefully monitoring the score of the Packers game on his phone,  and a man who announced himself as “the private chef for Shawn Carter and Beyonce Knowles” (once he identified the profession of his seat mate, he asked that our conversation be very off the record). Also, Mary J. Blige performed a single song, which was pretty cool but most just a fun excuse to see Mr. Koons boogie and clap along.

Somewhere between risotto and red meat, Simon de Pury stood up atop the covered pool to begin the charity auction. First up were the Birkins, which had been donated by a few luminaries. Sofia Coppola explained to the room that her father had given her the bag originally, but she had others and could bear parting with it. It was bought by Alberto Mugrabi for $175,000. Michaela de Pury bought one of the others, perhaps out of obligation to her husband.

And then it was time for the big sale, the sculpture that stared down the deep-pocketed room. The price was ginned up and ginned up as bids were cast around the room, creeping up well past the $2 million estimate.

Then he started picking on one person in particular.

“Aby Rosen, this sculpture has just showed up and now, poof! It’s gone! Bid away. Come on, everyone, bid away. If you were to take an extra bid, you’re still way way way way way off from what this will be worth in the very near future. Anyone else? It would look good in Southampton, it would look good in your stunning apartment overlooking Central Park. No? No? Well, then, we have one extraordinary man, a fantastic man, one brilliant man, at four million dollars—last chance!—we have someone here who is going to acquire this stunning work for four. million. dollars! You are a lucky, lucky man.”

But who exactly is this lucky man? No one seemed to know who he was. After some investigation, it turns out the winner was Mo Stojnovic, the president of Jana , a bespoke H2O company in Croatia, but a source told us later he was buying for someone else.

Whoever bought it, they beat out Aby Rosen, meaning the Koons can’t stay in the Seagrams Building to replace the Picasso. I asked him what would, eventually, replace “Le Tricorne.” He shrugged.

“We’ll need to replace it with something,” he said, and then walked out without looking at the blank space. 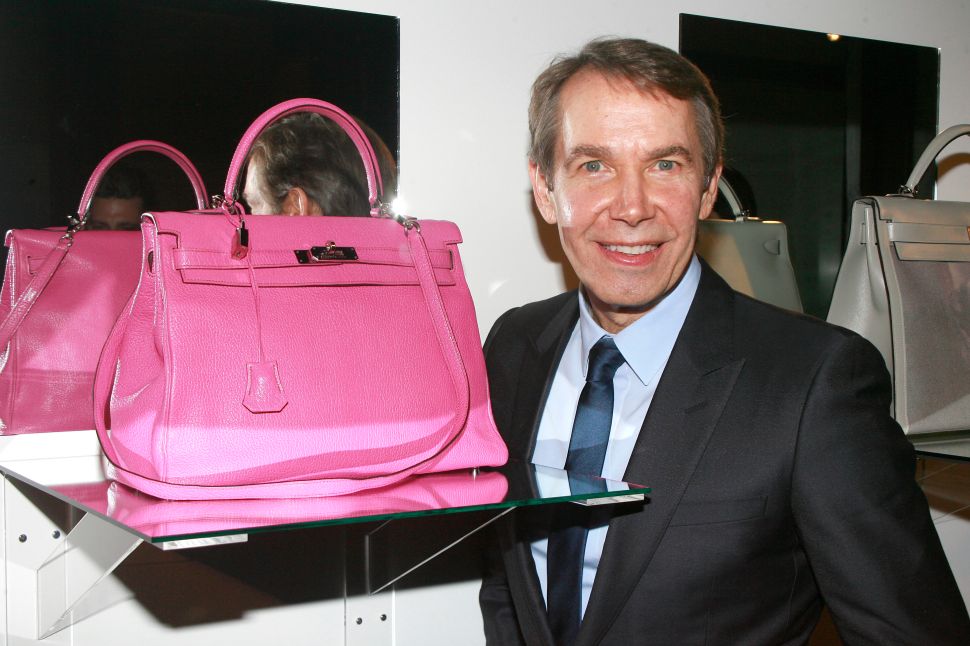