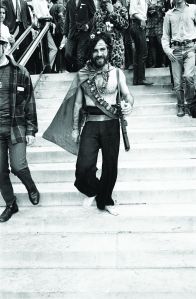 American activist Jerry Rubin (1938 – 1994) smiles as he walks down the steps barefoot outside the 1968 Democratic National Convention, Chicago, Illinois, August 1968. Rubin, who founded the Yippees political party, and six others, called the Chicago Seven, were indicted for conspiracy and inciting a riot during the convention. (Photo by Hulton Archive/Getty Images)