If you spent any time on the internet last week, you probably saw some story on Paper Magazine’s attempt to “Break the Internet” with nude photos of a certain celebrity. They didn’t. The photos couldn’t hold a candle to last week’s biggest news:

Mankind put a spacecraft on a comet.

On November 12, the European Space Agency’s Rosetta spacecraft said goodbye to its Philae lander as it descended toward the incredibly fast-moving Comet 67P. #CometLanding dominated Twitter, and it’s easy to see why. Not only is the landing an incredible accomplishment on its own, it was filled with enough drama for a summer blockbuster. We even had loveable characters. The ESA set up official Twitter accounts for both Rosetta and Philae. The conversations between the two of them were nothing short of adorable.

Ready when you are, @ESA_Rosetta. Give me a little nudge? #CometLanding

.@ESA_Rosetta WOW! I feel like I’m floating! And #67P is closer and closer… #CometLanding

.@ESA_Rosetta I will send you hundreds of postcards from #67P 🙂 #CometLanding

And that drama I mentioned? Philae didn’t just land once. It landed three times. As impressive and cool as that sounds, it wasn’t a good thing. According to a post on the ESA blog, Philae’s harpoons didn’t fire and the lander bounced. Because of the extremely low gravity on the comet’s surface, the lander didn’t come back down for almost two hours. A smaller bounce (only seven minutes long this time) brought the lander to a stop in the shadow of a cliff, said another ESA blog post. Rosetta sounded hopeful, if a bit dismayed.

.@Philae2014 you’re in a shadow? How am I supposed to spot you there?! Our teams working hard to find you 🙂

Philae was rotated to capture the maximum amount of solar energy, but it still used nearly all of its power completing the experiments and sending the data back to earth. Despite the setbacks, the mission was a success. Philae sent all its data and tweeted a bittersweet farewell to Rosetta before going to sleep.

Thank you, @ESA_Rosetta! I did it! I became the first spacecraft to land on a comet & study it! But it’s not over yet… #CometLanding

.@Philae2014 That’s true, your data needs analysing & I’ll keep pace with #67P as it orbits the Sun & study how it changes. #CometLanding

But the internet never misses a chance to complain, even when faced with a feat as breathtaking as this. The hashtag #WeCanLandOnACometButWeCant allowed people to use this monumental human achievement to complain about the modern world.

#wecanlandonacometbutwecant fill a potato chip bag to the top.

Of course, this kind of thing is to be expected. Almost every major scientific breakthrough seems to remind us how far away we really are from the future we were promised. Remember, it’s almost 2015. We were supposed to have hover boards and a digital Ronald Reagan serving us Pepsi at Café 80s by now. But if we can’t have all that, well… at least we can land on a comet. 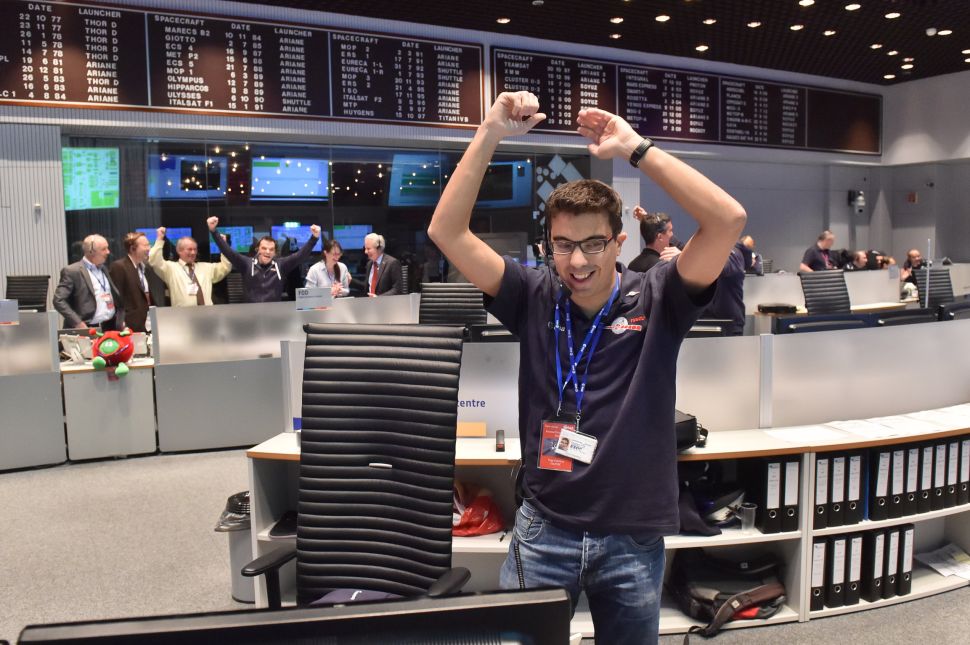