Much like the plot of Blair Witch, “Glasgowman’s Wrath” features three youngsters heading into the woods on a quest to capture a video image of an illusive figure; in this case it’s three girls on a quest to see the supposedly iconic Glasgowman.

The journey immediately becomes a nightmare when the girls hear screaming, begin running, and one of them falls down (a classic horror movie move!). Suddenly, the footage from the hand held camera recording this adventure smashes to black.

It’s promptly revealed that the youngest of the three, Zoe, was the one who lost her footing but was miraculously found by a stranger in the park.

While being treated for stab wounds in the hospital, Zoe recounts the girls’ evening and it’s quickly discovered that the other two, Zoe’s older sister Mia, and Mia’s friend Perry, haven’t been seen or heard from since their adventure in the park.

During their search for the girls, the detectives detain a park resident, Charlie, whose mental instability is both heart wrenching and creepy at the same time.

While investigating Charlie, the true background behind the legend of “Glasgowman” begins to come into focus. Knowing about Charlie’s residence in the park, local kids began referring to him as ‘Glasgowman,’ a name that was picked up by Perry’s newest babysitter, who then used the information as background material for a graphic novel series containing violent stories that he shared with the girls.

After a heated search, the two missing girls turn up in an abandoned gatehouse, each with stab wounds, but their accounts of what happened and their injuries don’t add up.

Quite quickly the suspicious detectives separate Mia and Perry and the details of a sinister plot by the teens begins to emerge with each saying the other carried out the actual stabbing.

While Mia insists that Perry forced her to stab Zoe, Perry suddenly reveals her utter devotion to fictional Glasgowman, saying that he told her to do these things and ultimately wanted her to kill Mia, but, through tears, she says she’s couldn’t do it.

In court, the judge orders that the clearly demented Perry be remanded to a psych facility while she clears Mia of any wrongdoing and releases the girl to her family while strongly recommending counseling for the child.

As the episode closes, Rollins and Carisi end up in the elevator with Perry, whose hands are cuffed behind her back, and Mia with her parents. Carisi glances down and catches Mia and Perry in a pinkie clinch. After quickly checking to see if Rollins has noticed this, he realizes that he is the only witness to this exchange.

As mentioned earlier, this episode mirrors a recent incident involving a character entitled Slender Man and if you didn’t know that story, then this episode probably seemed creepy and the results of this SVU investigation unexpected. But, if you’re familiar with the story, this was all a bit predictable.

In May, of this year two twelve-year-old girls in Wisconsin admitted to stabbing a classmate multiple times, saying they wanted to commit a murder as a first step to becoming “proxies” of the Slender Man.

This was the same phrasing used by Perry when she described why she assaulted both Zoe and Mia.

While maybe a bit unoriginal in plotting, this episode was still adequately spooky and disturbing, particularly with regard to the violent actions carried out by the youngsters.

Earlier in the season, SVU Executive Producer Warren Leight revealed that the exploration of the nature of family would be a constant this year on this show and this episode absolutely stayed true to the edict, featuring several subliminal statements on that very subject.

First, there was the subtle mention of Nick having recently visited ex-wife Maria and daughter Zara in California. Interestingly, the topic was brought up by Rollins, who inquired as to how the trip went, to which Nick responded quickly that it went well. What this means for the two, who have hooked up outside of the squad room in the past, remains to be seen, but it has been revealed that an upcoming episode will have them on opposite sides of a case leading to an elevated level of tension between the mates. Which aspect of their relationship will this affect more; their work association or their personal bond? Most likely both, as there quite intertwined.

Next, let’s talk about Olivia’s latest adventure in parenting. While it may seem like a simple occurrence of being called into work on a weekend and having to quickly secure a sitter to take care of Noah, let’s look to the rest of this episode to put some perspective on that seemingly straightforward scene.

When it’s revealed that Perry’s babysitter is the one spinning the tales of “Glasgowman,” Zoe’s mother seems shocked that Perry has yet another babysitter that she didn’t know about. Given her work, it seems Olivia would be scrupulous in vetting Noah’s caregivers, right? But just like any other parent, she can only screen so much and then she just has to rely on her maternal instincts about what’s best for Noah. Choosing whom to care for your child in your absence is one of the most anxiety-ridden decisions for any parent and this would certainly hold true for Sergeant Benson.

While Olivia is a single parent, it should be noted that Mia and Zoe’s family consisted of two moms. Actually, it shouldn’t be noted, but the fact that the writers of SVU chose to incorporate this type of increasingly common family into the storyline without it being a major plotline is refreshing, especially while states across the country are increasingly striking down the same sex marriage ban.

The scariest statement about family in this episode came in the form of the relationship between the two sisters. The fact that one sister would knowingly hurt the other was quite stomach turning. Yes, we’ve seen family members hurt each other before on SVU but generally they’re adults. The realization that big sister Mia actually intended to hurt the small, vulnerable Zoe was as hard for viewers to accept as it was for her parents, just as it should be.

Speaking of sibling interaction, it’s hard not to notice that there is a sort of sisterhood thing going on between Benson and Rollins. While they don’t always get along and while Benson is the obvious superior in this relationship, literally and figuratively, there is something going on with these two women that teeters between professional respect and personal appreciation. Whereas before she seemed more suited to research, Rollins now appears to have really grown in her ability to size up suspects and sniff out the truth. This emerging ability clearly isn’t lost on Benson, but it was still a little surprising when Benson asked for Rollins opinion as to whether Amaro or Carisi should question suspect Charlie. After a moment of surprise at being expected to offer her opinion and straight out choose between the two men, Rollins rightfully picks Carisi who in turn excelled at getting Charlie to open up in a way that Amaro certainly wouldn’t have been able to do.

Speaking of Carisi, rather shockingly, he suddenly seems to fill a previously unknown void in the squad room in that he’s displayed a clear ability to read suspects and determine the exact method needed to get what he wants from them. He showed this day one when he and Benson struggled to get a prostitute to cooperate with them, He told Benson that he being gentle with her wasn’t the way to go, saying that he had to go at the girl hard as she was used to men making demands of her, that it was the only way she knew to communicate with men. It worked and he got what he needed. That same intuitive ability held true when Carisi worked with the reclusive Charlie, drawing the man out by displaying some compassion. When he first appeared in the squad room, Benson was peeved that Carisi was sent to fill the open spot despite the fact that she’d asked for someone empathetic. Turns out she may have gotten just what she asked for and just isn’t truly aware of it yet.

On the surface, this episode of SVU may seem like a simple tale of young girl’s devotion gone awry, but once again it’s the undercurrent of the installment, filled with various incarnations of complicated issues, the main one of which seems to be who do you trust and at what level, that make this a satisfying episode.

Next week the SVU team becomes involved in a case that has them working with the teams from Chicago Fire and Chicago P.D. in an unprecedented three-show crossover. Leight adamantly says that these are legitimate crossover episodes and not just one scene here and there featuring characters from each show. Aptly titled simply “Chicago Crossover,” it will be interesting to see these characters entering each other’s worlds. The real question is just how Sergeant Benson and [Chicago P.D. Detective] Voight will interact (or as Leight refers to them, ‘Batman and Superman’), and if there will be any serious discussion about another important matter — the difference between New York-style and Chicago-style pizza. Yes, it’s vital to explore issues such as this, and these are just the shows to do it. 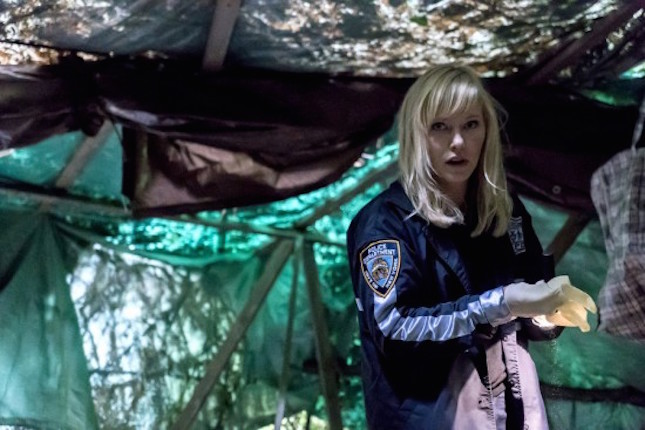