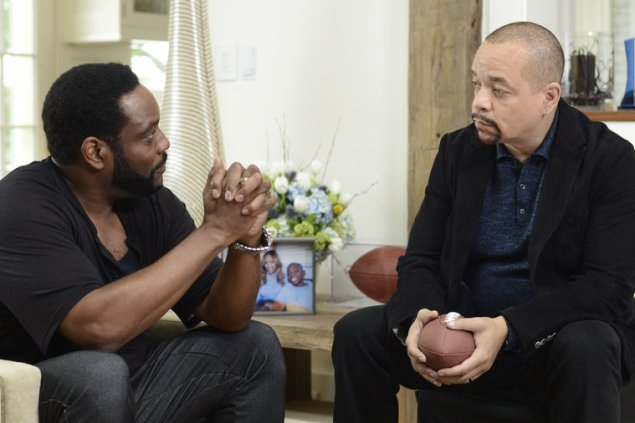 In a ‘typical’ episode of SVU, viewers will inevitably side with the detectives when it comes to assigning guilt. It’s kind of like a tradition that you can count on; they know who the bad guy is, they go after him (or her!) and bring ‘em down, all to the collective satisfaction of both the on-air characters and viewers at home.

Tonight’s SVU had no such clear path.

It began with a grainy video from the stairwell of a parking garage starring an inebriated couple stumbling about. With a quick cut, signaling some missing footage, the video picks up with the male dragging his now unconscious companion to their vehicle.

When the segment of lost video is uncovered, it reveals that the man in the footage, A.J. Martin, an award-winning retired NFL player turned sportscaster, has actually punched his long-time girlfriend and the mother of his child, Paula, in the face, knocking her out. Upon seeing this violent act all over the internet, the SVU squad decides that it’s time to take action.

Yes, the whole incident screams ‘Ray Rice,’ so much so that early in the episode Benson even name checks the athlete saying, “After Ray Rice…if it looks like domestic violence, we follow up.”

What transpires is an investigation and legal proceedings that have no shocking revelations that make the case open and shut, but rather one that allows for statements to be made about race, culture, and what constitutes a victim.

Paula and Benson have a frank discussion about the perception, or more appropriately, the misperception, of black men when it comes to violence, while Fin and Amanda speak up about how physical punishment as a method of discipline was commonplace, and expected, in their upbringing.

Throughout the investigation of A.J., Paula faces just as much scrutiny as her boyfriend due to her decision to defend his actions and remain with him. In fact, in the midst of his indictment and trial, the two get married.

In the courtroom, both A.J. and Paula take the stand, as does Benson, all three with very different things to say.

Benson explains many of the issues victims of domestic violence face, saying, “It’s   not uncommon for victims to refuse to testify because they are emotionally or financial dependent on their abuser. Some are scared of reprisal and a victim is most at risk when she goes against her abuser or tries to leave.”

At this point, the defense attorney, explains that her client has is involved in anger management counseling, to which Benson responds that she isn’t convinced that this type of therapy actually works. With some crafty questioning, the attorney puts Benson on the hot seat by mentioning that the Sergeant recently reinstated Amaro after he assaulted a man and underwent a short anger management stint. Benson has a curt, but ultimately ineffective, response to this exchange and while Benson may have gained some ground with the jury in terms of truly seeing Paula as a victim, the defense attorney seems to have won this round.

When testifying, A.J. comes across as both self-righteous and repentant about his actions. He doesn’t seem like a habitual abuser but he’s clearly not blameless either. It’s difficult to know exactly how to feel about this man, and that’s precisely the point here.

As Paula sits on the stand, Barba gives everyone in the courtroom a lesson on the proper questions to ask to determine if someone is being controlled or manipulated. He outlines how Paula met A.J. when she was young and how she almost immediately quit an important job to be with him. He asks her if she has any close friends and when was the last time she’s gone out with a male friend, her sister or just girlfriends without A.J. being there. When she forcefully tells Barba that she’s not leaving her husband, he picks up on the fact that maybe she’s heard from her sister or others that she should do just that. This round of questioning seems to go to Barba.

Both attorneys give impassioned speeches in their closing arguments with A.J.’s defense attorney insisting that this is a private matter between two passionate people, that at no time had Paula expressed any fear of her husband and that she did not want to press charges. She concludes by telling the jury that if they convict A.J. they will tear a family apart.

Barba takes a different tactic, making this not about this specific couple, but about the overall issue of domestic violence, saying that to not convict A.J. sends a message that it’s ok to control, intimidate and physically hurt your spouse, that silence says it’s acceptable. He reiterates that this is a crime even if she’s his wife.

In the hallway of the courthouse, Paula lays into Benson harshly snarling at her, “You think A.J. was beating me up? What do you think you did?” A momentary look of confusion over what has actually transpired with this case crosses Benson’s face. Upon seeing this, Barba reassures Olivia that she did the right thing to which Benson simply replies, ‘I know,’ but her conviction in after seeing the actual outcome and the aftermath of this conviction th doesn’t seem quite as strong as it did when the whole case began.

Often times at the end of an SVU episode there is a shocking twist; someone dies or something happens that proves that the detectives were right the whole time in their dogged pursuit of someone or something. This time there was no such twisty ending, and while the defendant was convicted there was no complete satisfaction for anyone, and that was an amazing plot point in and of itself.

As mentioned, usually fans can just follow the detective’s lead as to what’s right and what’s wrong, but in this case, even the members of the squad weren’t unified in the conviction that this was a case worth pursuing.

To Amaro, Fin and Benson it was very clear that this was a criminal act and should be treated as such, but Rollins insisted that not everyone needs saving, that you can’s save someone who doesn’t want to be saved.

To make a statement and show that a woman can provoke a man to the point of physical response, she attempts to do just that to Nick in a bar. She gets in his face and shoves him several times and when he finally cracks, he smashes a glass and says that he’s doing what A.J. should have done and walking away.

This exchange between the two speaks volumes about their contentious relationship to the point where viewers might ask ‘if they anger each other so much why do they continue to get together?’ Ahh, that’s precisely the overall issue here; that only the two people who have chosen to share their time can decide whether continuing to do so is worthwhile.

Amanda may be thinking a bit more about her interactions with Nick following an exchange with Fin, who true to his nature seems to know what’s going on with his two co-workers but is staying out of it as best he can. When Fin, giving Amanda a knowing look, tells her, “You can’t take this job home…and you can’t take anyone from this job home with you,” she offers no discernible response other than a half-hearted, confused grin.

Overall, this episode was an amazing way to showcase all of the gray areas surrounding domestic violence, and while there has been much discussion about the matter recently, there are still many things to be learned about the issue, many very important things.

Production wise, while this wasn’t an action packed episode, the quiet nature of the evaluation of this case was clearly enhanced by a several behind-the-scenes choices..

First, once again the guest stars of this episode, Chad L. Coleman and Meagan Good, were incredibly on the mark in their portrayal of the contentious couple at the center of the storyline. They both managed to make their characters both aggravating and sympathetic at the same time, quite a difficult combination to achieve and yet they did so extremely well.

First time SVU director Sharat Raju certainly proved that he knew just how to tell this highly charged, yet intimate, story. Also remarkable was his clear collaboration with editor Karen Stern on the Rollins/Amaro scene. The two exhibited strong creative choices that made the exchange between the two gripping, tense and utterly believable. Watch it again and you’ll see what I mean. This scene is a stellar combination of writing, acting, direction and editing.

Finally, fans of SVU know that series star Mariska Hargitay, through her Joyful Heart Foundation, has been an active participant in the fight against domestic violence for over a decade, and while it’s disturbing that it’s taken several recent highly publicized incidents to move this issue to the forefront of the collective consciousness, it’s oddly satisfying that this is just what makes episodes like this not only possible, but incredibly relevant.

While SVU may have started out as a show focused on solving gruesome sex crimes, it’s certainly evolved into much more, and this installment proves that beyond a doubt.

Now, sadly, SVU takes a three week hiatus and will return December 10th with the an episode entitled “Pattern Seventeen.” 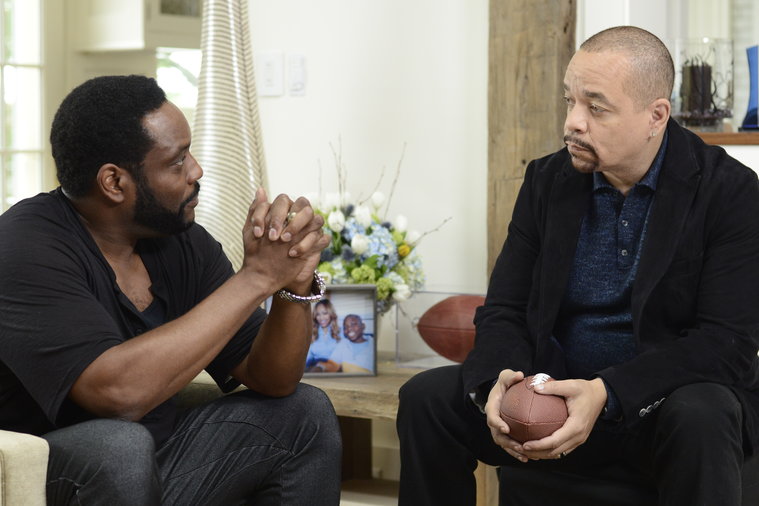