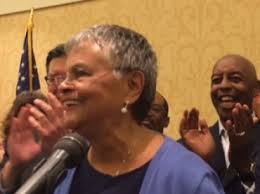 The champagne-soaked troops of Assemblywoman Bonnie Watson Coleman (D-15) this week partied through some teeth gritting at her CD12 victory bash, as they try to figure out who will replace her.

The trouble is there are two people and one seat.

Hughes, for his part, sees Muoio – a longtime loyal party soldier – as the best qualified person for the job.

Hughes toyed with running for the congressional seat, but backed out to support Watson Coleman.

But Jackson and company do not want to empower those forces at the county level who impeded his own run for the mayor’s seat. The mayor wants to reward those loyal to his cause from the beginning.

Both sides say the men are civil and working together effectively from a governmental standpoint. Both sides are optimistic about a peaceful resolution.

Indeed, the political collision between Hughes and Jackson has opened up the possibility of Assemblyman Reed Gusciora’s (D-15) removal from office to a safe landing spot as a judge.

That way both Frisby and Muoio could satisfy the wills of the two power players.

The wrinkle is that Watson Coleman’s seat will have to be filled ten days from the day the assemblywoman abandons the seat to start her now job in congress.

Whoever assumes the seat – Frisby or Muoio – will leave the other party at a disadvantage heading into the March party convention.