In the end, it wasn’t even close.

Congressman Michael Grimm — who is under a 20-count federal indictment and famous for threatening on camera to throw a reporter off a balcony — cruised to re-election Tuesday night, beating Democratic challenger Domenic Recchia Jr. by 13 points at the end of race that was more of a circus.

Many have asked how Mr. Grimm, with his scandals and upcoming court dates, could win. But perhaps the bigger question is: how could Mr. Recchia lose?

A former councilman from the Brooklyn sliver of the bi-borough district that includes all of Staten Island, he had steered millions of dollars to Staten Island as finance chair. He had the support of national Democrats, while national Republicans abandoned Mr. Grimm after his indictment. A gifted fundraiser, Mr. Recchia brought in $2.3 million to his own campaign coffers. The Democratic Congressional Campaign Committee kicked in another $1.6 million on the race, and the House Majority PAC plunked down $2 million more. And unlike his opponent, Mr. Recchia isn’t facing any jail time.

But some $5 million and an ugly campaign later, Mr. Recchia lost by a wider margin than Mark Murphy did running against Mr. Grimm in 2012.

Staten Island and Brooklyn political operatives and officials pointed to a number of factors in seeking to explain the crushing loss: Mr. Recchia’s Brooklyn address, a campaign run by outsiders who don’t understand Staten Island, a brutally bad night all around for Democrats and, perhaps most importantly, Mr. Recchia himself — who suffered from gaffe after flub after gaffe.

“For all the work that the party did, both the local and the national level, there is no excuse for the way Domenic just imploded like that,” one Staten Island Democratic source said.

The first strike against Mr. Recchia’s campaign came long before any of his verbal missteps, in the very place his effort started: Brooklyn.

“As much as I love the Brooklyn part of the district, and for me it was an honor to represent it, it’s quite clear that a candidate from Brooklyn cannot win the seat. This is, in my memory, the fifth time that someone has tried,” said former Congressman Michael McMahon, the Staten Island Democrat who lost the seat to Mr. Grimm in 2010.

The vast majority of the district’s voters are located on Staten Island, where they are inclined to elect one of their own — an attitude Mr. Grimm effectively capitalized by painting Mr. Recchia as outsider.

That leads to Mr. Recchia’s next problem: his effort was steered and funded largely by the DCCC. Staten Islanders — defensive and proud outliers, a borough of lawn signs in a city largely without lawns — simply didn’t respond that well to generic talking points about the middle class or minimum wage.

“The folks from the DCCC were wonderful, but they have to blend in and absorb and integrate the local color — especially in a place like Staten Island that has a feeling of, and is very proud of, its uniqueness,” Mr. McMahon, the only Democrat to hold the seat in the last 30 years, said.

Rather than running ads touting Mr. Recchia’s achievements, or outlining his plans for the future, the DCCC, the House Majority PAC and Mr. Recchia focused on bashing Mr. Grimm — blanketing airwaves and mailboxes with nonstop, chiding reminders of the 20-count indictment he faced.

“There’s two schools of thought on negative campaigning — there’s some who think they’re effective, and some who say they’re not. I fall in the latter camp,” said State Senator Diane Savino, a Democrat who placed most of the blame for the loss on swing voters siding with Mr. Grimm. “You’ve got to give people a reason to vote for you, not a reason to come out and vote against someone.”

Mr. Recchia and his campaign didn’t give voters a reason. He rolled out few policy proposals aimed at Staten Island or elsewhere. He held roundtables with labor leaders, but could not define a high-profile trade agreement he was campaigning against in a moment so embarrassing it earned him a lengthy send-up on the Daily Show.

The ads highlighting the indictment — not related to campaign finance or the public trust but to withholding taxes and hiring illegal immigrants at a restaurant years ago — failed to turn voters against Mr. Grimm in a borough that often feels targeted itself and is ripe with cash businesses.

Instead, negative ads may have depressed turnout, Mr. McMahon said — in a race where big turnout is key if a Democrat wants to win.

Of course, it was also a devastating night for Democrats everywhere.

“We lost the United States Senate, for God’s sake,” Assemblyman Matthew Titone said. “The true problem is Democrats really need to go back to the drawing board to take a good hard long critical look at ourselves — we have a great message, but can we do better?”

But even while they thoroughly rejected Mr. Recchia, Staten Island voters chose Gov. Andrew Cuomo over his Republican challenger.

Undoubtedly, part of the reason Mr. Recchia lost lies in himself. Before voters knew him well, they were willing to give him a shot — a September 16 Siena College/Capital NY/NY1 poll showed him down 4 percentage points, within the margin of error. But by October 31, he was down 19 points.

What happened between the two polls? Mr. Recchia happened.

“I think it went wrong the minute that first poll dropped,” the Staten Island source said. “All of a sudden media for obvious reasons became much more invested in the race, as were voters. And unfortunately, Domenic was not up to snuff at communicating, as evidenced by his inability to talk.”

Mr. Recchia’s failure to communicate surprised many who knew him and supported his candidacy — he had not been plagued, at least publicly, by similar embarrassments as City Council finance chair. But then, he had not been subject to the same level of scrutiny as he was in the hotly watched congressional race — and many placed the blame on the DCCC for not having their candidate ready for prime time.

“He said that this has been a two-year campaign for him — and for his handlers, advisers, consultants to fail to notice that he is not adequately prepared and/or knowledgeable on the issues, both domestic and international, is a monumental breakdown and clear illustration of incompetency behind the management of this campaign and the candidate,” a Brooklyn Democratic source said.

Throughout the last few weeks, Mr. Recchia insisted he was better than he sounded. He made that pitch one last time in his concession speech.

“I always bridged two boroughs, and I always believed we can bridge two parties. Everything I’ve ever gotten done was done by reaching some kind of consensus. And if you’ve learned anything about the partisan gridlock that these seats cover, it’s that consensus is nowhere to be found. The people of Staten Island and Brooklyn deserve far better. And I hope to get you there. I may not be the best talker, but I’m a great doer,” Mr. Recchia said.

Mr. Recchia’s run is over, but the future of the seat isn’t entirely settled. Even before the votes were counted, politicos on both sides of the aisle buzzed about the possibility of a special election, pending the outcome of Mr. Grimm’s trial — a prospect that would give each party an opportunity to try again with someone else.

“I think everyone feels that having a quality representative in Washington is worth fighting for,” Mr. McMahon, often named as one potential contender, said. “And I know that I and many Democrats from Staten Island and Brooklyn and the district are committed to continuing that fight. We’ve lost the battle here, but we’ve not lost the war.” 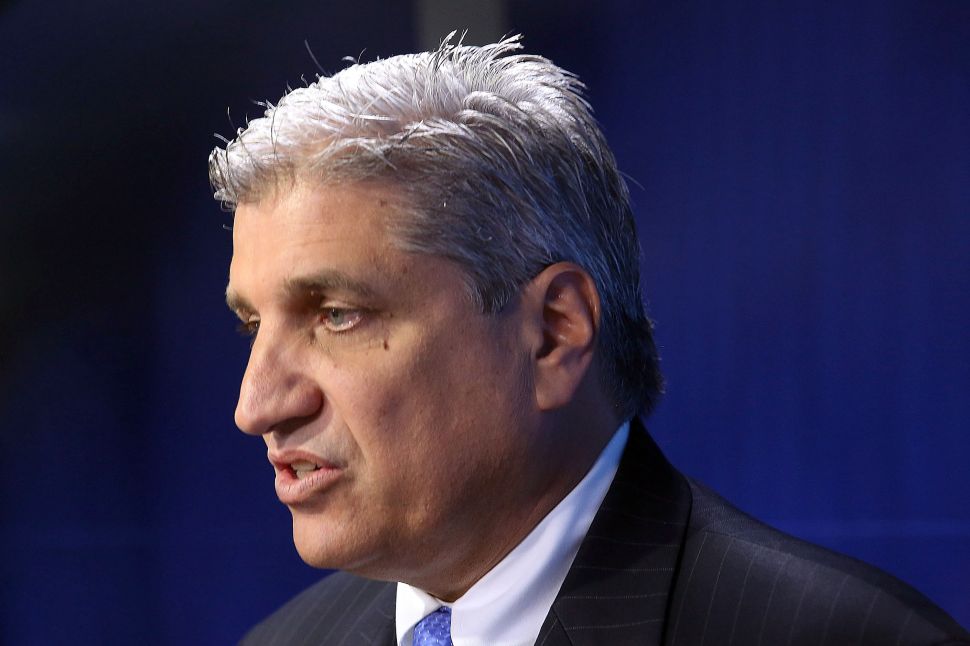