Okay, aren’t there some science experiments that are better off left to our imaginations?

In a feat 7 trillion times scarier than going down in one of those shark cages, naturalist and wildlife filmmaker Paul Rosolie will voluntarily feed himself to a gigantic anaconda in a Discovery special called Eaten Alive.

To accomplish his harrowing journey into the world’s largest species of snake, Mr. Rosolie will get into a “snake-proof suit” and douse himself in pig’s blood, Entertainment Weekly reports. Based on the picture below, he kind of looks like an evil astronaut. Or a Power Ranger.

“We’re going to get me inside the snake,” Mr. Rosolie says in a promo video. “We’re going to make me as appealing as possible so the snake says, ‘Well, I’ve got this big thing here, might as well make a meal of it.”

The special suit will have a cord attached to it, so that Mr. Rosolie can be extracted from the snake after he’s consumed.

Thankfully, EW also reports that the snake doesn’t die, which is nice. It never asked to be part of this absurd TV special. We also assume that Mr. Rosolie survives the ordeal, as he was still tweeting as of yesterday.

Eaten Alive airs on Sunday, Dec. 7, so get your DVRs ready, nerds. 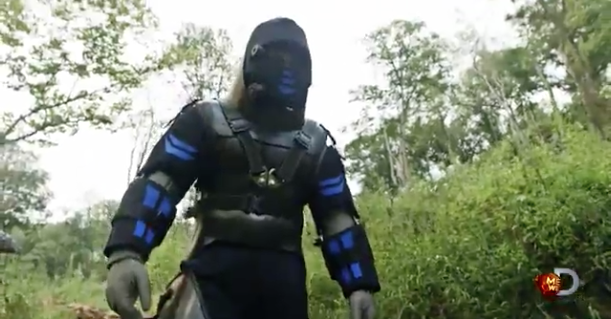