Americans meet Mark Strand in anthologies; “Keeping Things Whole” appears everywhere, and it deserves to. Strand was a mournful poet, writing elegies for everything, his own death and other losses.

In this photo, Strand appears with Joseph Brodsky, Adam Zagajewski, and Derek Walcott in Brodsky’s garden, January 12, 1986. If you’ve read his dark poems and cried for him, or read his poems after a terrible fight with your one true love, then it is especially heartening to see Strand smiling with his fellow poets. He predicted his own death from his first collection in 1964, but in this photo, he still has nearly three decades left, and every award he’s about to win.

From the Long Sad Party

something about shadows covering the field, about

how things pass, how one sleeps towards morning

and the morning goes.

how the wind dies down but comes back,

how shells are the coffins of wind

but the weather continues.

It was a long night

and someone said something about the moon shedding its

on the cold field, that there was nothing ahead

but more of the same.

a city she had been in before the war, a room with two

against a wall, someone dancing, someone watching.

We began to believe

the night would not end.

Someone was saying the music was over and no one had

Then someone said something about the planets, about the

how small they were, how far away. 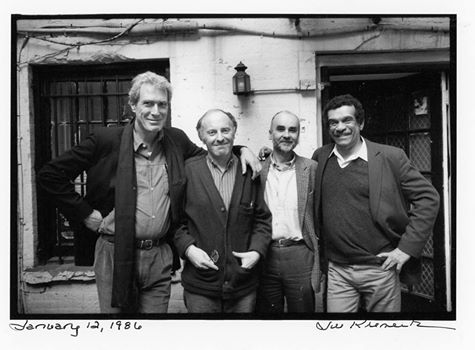