One midtown businessman is repulsed by the dozens of street vendor food carts around New York City. Crain’s reports that the cultural staples found on the sidewalks around Bryant Park and Macy’s are giving him “indigestion.”

Dan Biederman, president of the 34th Street Partnership and the Bryant Park Management Corp., claims that food cart vendors are “clogging the sidewalks and creating an eyesore,” according to the New York Post.

Mr. Biederman even met with Police Commissioner Bill Bratton, who reportedly listened carefully to the businessman’s case against the “out of control” sidewalk fixtures that sometimes “extend to as high as 20 feet.”

The representative for businesses such as Macy’s and Madison Square Garden believes that it is “unbelievably unfair” that carts are not held to the same standards as restaurants–claiming they get away “scott-free”.

Street Vendor Project (SVP), a non-profit organization which teaches vendors about their legal rights and responsibilities, jumped to the aid of the Midtown food vendors. Sean Basinski, a representative from SVP told the Observer, “I suspect that [he] is incorrect. Vendors are inspected once a month or more, whereas restaurants get a grade once a year.”

According to Mr. Basinski, the Street Vendor Project has been demanding grading for vendors for some time. “We want the legitimacy and protection of a grade. Vendors want to be treated the same as restaurants, because they are treated better,” he said.

Mr. Biederman also wants reform, though not for the same reasons at SVP. According to the businessman, “Every street cart should be rated,” insisting that street carts are dirty, and not up to par with restaurant safety standards. “I think even the people who eat from them know it.”

In response, Mr. Basinski told the Observer that Mr. Biederman, who even slammed cabbies back in 2011, “Has a long history of opposing vendors… A couple years ago he was quoted saying that vendors were bad citizens and dirty people–he said that about thousands of hard working people… That is racist language.”

Although Mr. Basinski noted that, “We cannot look into his heart,” he claimed that Mr. Biederman’s latest campaign against street vendors is biased against the minorities who account for many of the city’s street vendors.

A representative from Mr. Biederman’s office responded to Mr. Basinski’s reference to comments made in a March 2012 DNA Info article saying, “Dan has never criticized the ethnicity of food vendors… he has criticized the actions of food vendors in terms of the aesthetics of the food carts and also the fact that they leave litter behind. People who do things like that he does not consider good citizens.”

Yet while Mr. Biederman and Mr. Basinski agree on the necessity of grading food carts, Mr. Biederman wants more. “We’d like a lot of things, but there is a long way to go. There should be a limit on size, number, and location,” he said. “We are not saying ban them, but pull back. Some streets are overwhelmed by them–they are really out of control.”

As for Mr. Basinski’s attack on the businessman’s racist language, he said, “I don’t know the ethnicity of these men. [Food carts] are everywhere–just walk the streets of Manhattan.”

“The city has stepped back in the last two decades and let things get out of control,” he added.

This article has been updated with a comment made by Mr. Biederman’s office in response to Mr. Basinski’s claims. 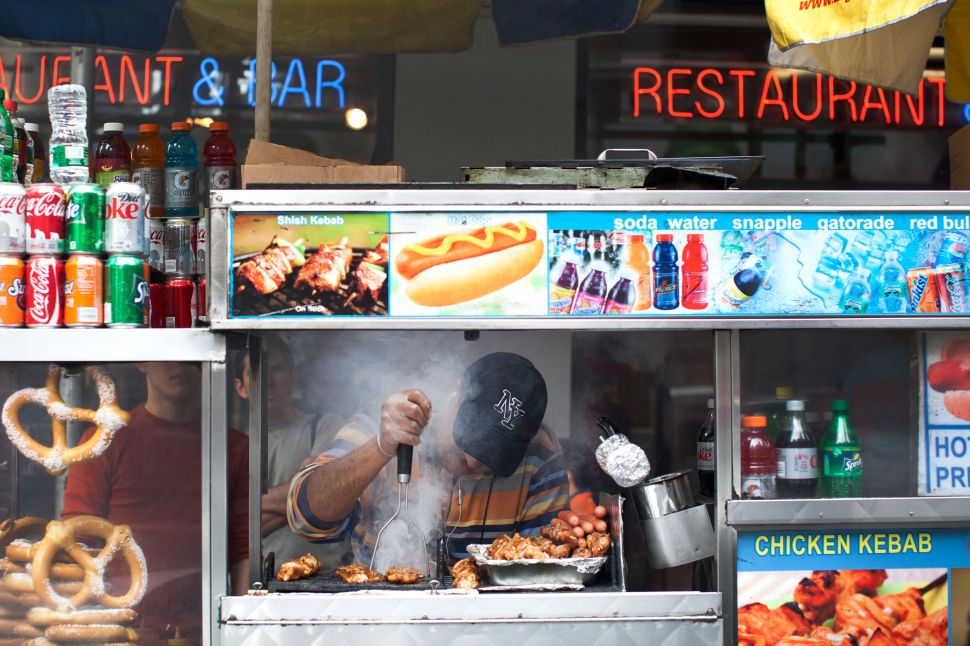