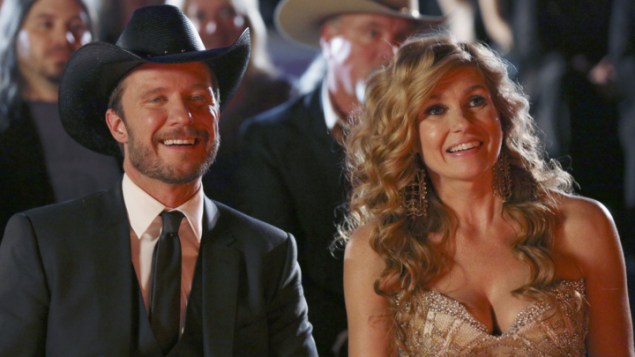 Nashville goes to the awards!

Nothing says, “Happy CMAs” like finding a pre-nup in your fiancé’s briefcase! Gotta say, Luke will prove himself a true monster later in the episode, but on this one lil pre-nup thing, I’m kinda with him. It would be absurd for any celebrity couple with a moniker not to sign a pre-nup. Especially since just last year, Rayna sold the farm to start Highway 65.

I feel like Nashville is playing a game of “gotcha!” with its audience and Luke and Rayna’s relationship. Every week, there are more and more signs that point to an UsWeekly SPLIT! Headline. And then, every week, Ruke walks through the fire, unburned. At Country’s biggest night we got to witness a drunken Luke screaming at Rayna in a bathroom. He slurs, “the only reason your album went gold, is because I proposed the day it dropped!” Them are fightin’ words, son! And also, it’s kind of everything Rayna fears about this relationship, boiled down into a rage nugget. But then, what does Rayna do after this tantrum? She thanks Luke on stage after she beats him for entertainer of the year. Rayna’s no fool – she knows you catch more flies with sugar and also that by thanking her daughters and her surrogate daughters, Sadie and Juliette, first, she’s able to shame Luke for his behavior, under the guise of thanks.

Even Deacon and Scarlett, watching the CMAs from home, comment on how unhappy Ruke looks. I fear we are heading for a “left at the altar” or “called off the day of the wedding, when everyone is already dressed up” situation, perhaps ending in a will they / won’t they cliff hanger where Deacon pulls a graduate or something, all conveniently timed with the winter hiatus. Come on Nashville, you’re better than that. Aren’t you? AREN’T YOU?????

Well the good news is that in exchange for every other couple on the show fighting (that Gunnar/Zoe shoe had to drop sometime), we put some healing balm on Javery. They’re not quite there yet, but there was that restrained moment when Avery unzipped Juliette’s dress and then gently thumb stroked her back. Good stuff, Nashville. And for that, I will forgive you for Micah’s teeth.

Also, Gunnar, you deserved to be dumped because that Micah shit was not Zoe’s fault and good for her if evil Jeff Fordham wants a meeting. What did JF ever do to you anyway, Gunnar? Or, do you just hate him because all the cool kids do.

Everyone in the world thinking Layla is a stupid bitch makes me hate her less. It used to be so lonely for me, being the only one who thought she was a stupid bitch, or more accurately, the only person I know who watches this show. I usually roll my eyes at Layla scenes but her, “I don’t want to be famous like this” comment was actually quite poignant. Especially followed by Will’s “you don’t get to choose.” These two are much more endearing when they are suffering together than when they are fighting. Also, that Harvard line was pretty fucking funny.

We finally got a real performance out of Sadie, with a bonus potential storyline. Did you catch Luke’s wandering eye while she was performing? I am anti this plot because I love the girl power thing we have going on with Sadie / Rayna / Juliette this season; it’s much needed after two seasons of catfights. Luke’s interest aside, maybe we can get some fresh blood in this town with Sadie’s ex. Or, if Teddy ever gets over his hooker, maybe a Teddy/Sadie mash-up?

Speaking of Teddy’s hooker, he got some this week, pro-bono! Way to go, Teddy! That probably means it was worth her time, if you know what I mean. I can’t wait for this mayor/hooker scandal to hit the fan. But I don’t wanna tease it out just yet. Maybe he’ll bring her as his date to Ruke’s wedding?

Deacon texts Rayna congrats after seeing how miserable she looked on TV with Luke. When that ex-text came in, post sweeping the awards, one could see the keen satisfaction on Ray’s face ie, “yes, that’s right everyone loves me.”

PS: Was anyone else hoping that when Rayna thanked Liam McGuinness he would magically appear in the audience and give Scarlett a story line that didn’t involve more banter with her homeless friend? 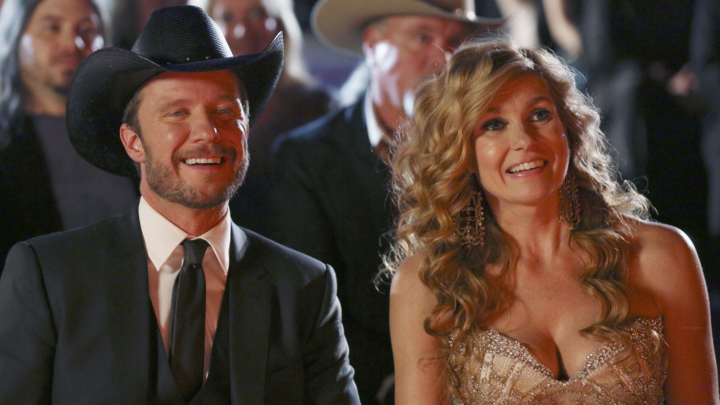