I know that Nashville didn’t air last week, but man, was this episode designed to make me feel like I’d missed something. So, last week we were gonna see how it went for Gunnar to be in Micah’s life as a “friend”. This week, he’s calling him dad. Okay, so…the revelation to this little boy, that Gunnar, one of our main characters, is his father is just…not air worthy? Okay. Cool, cool. Just wanted to make sure

Then, Scarlett’s homeless friend shows up at Deacon’s house, in a new spiffy new outfit, to leave a harmonica on the porch. Later in the episode, this man thanks Scarlett for “getting him a job”. Last time we saw this man he was running away from Deacon’s house, cursing Scarlett for being a busy body. When did she get him a job? Especially, a job that pays enough money for that harmonica and those new clothes? We all know Scarlett never fairly compensates this man for his work. And we also know she’s sellin’ songs like crazy to both Miranda Lambert and Carrie Underwood! We can then infer that Scarlett is rakin’ in some serious dough. Knowing this, what does she offer her homeless friend, in exchange for “an afternoon of song writing”? If you guessed, to buy his whole bag of ten-cent papers – you’re right. So this dude gets probably a buck seventy-five and Scarlett gets a new hit single. Fair trade? I don’t think so.

Later that day, either the guilt police came crawling through her weave, or she wants to reward this man for opening up to her about his dead family. Because she finally offers her new friend what she should have weeks again – shared credit for the songs they’ve been writing together. There’s a catch – she’ll only admit he helped her write them, if, he’s willing to perform their song at the bluebird. He won’t do it without Scarlett, and just like that Scarlett’s got a new Gunnar.

Sorry, had to get that out. I meant to start this week by talking about how we opened the episode with Rayna singing her new song on Dancing with the Stars! In a wink to the audience, the song is all about how much she loves loneliness. The song also includes the not-so-subtle lyrics, “I don’t want to be your ball and chain.” Rayna agrees to a weekend long exposé with Rolling Stone, and not once does that reporter say, “Hmm, Rayna, I find it interesting that you are about to get married and yet your most recent song appears to be about wanting exactly the opposite. In fact, in the lyrics, you practically reject your fiancé completely by quoting your hit single in a negative way. Did he not propose to you with those same lyrics? Are we not then to infer that you hate your fiancé?” I mean, I think if I’d been that reporter, I might have asked that, like, at least once?

But no, this reporter is really only interested in Maddie’s make-out sesh with Luke’s son. Rayna, playing damage control, instead spills the deets about her past with Deacon. You’d think having to talk about the man she actually loves, for what we can assume is hours, would make her finally admit that she does not want to become Mrs. Luke Wheeler. Instead, the Deacon files make her more convinced this wedding thing is a good idea! Oh Rayna, what goes on in that head nestled inside that perfect mermaid hair of yours?

Juliette and Avery still refuse to admit they love one another. Last week, I was mad at J for this, but, this week I think it’s all on Avery. Get over it, man. You can’t hate her forever. Emily got some good screen time playing damage control between Juliette and Avery. This left me, mainly just wishing Emily was a better actress. Where’s Glenn when you need him?

The Will and Layla show is Nick and Jessica Newlyweds 2.0. Layla is painted as a total idiot and I bet she’s really wishing that she’d gone to Harvard when she had the chance. Oh, also, I don’t know how the f this is possible, but Gunnar has apparently never told his gf Zoe that Will is gay.

I have to say that this episode didn’t really do it for me. A lot of it was one step forward, two steps back. I was left wondering if this was a writer’s room experiment, “hey guys, let’s see what happens if we take a week off, let some shit happen that we don’t see, and then come back and show the boring every day shit we’d normally leave out?” Between the phone call about who would pick Micah up at school and Luke telling us what each of the children’s favorite kind of bacon is, I felt like I was watching boring outtakes from the of Real Housewives of Nashville. JK, no housewives franchise would ever be so pedestrian.

Remember two weeks when Teddy realized he was tricked into stripping down to his skivvies with a hooker? And then, at the end of the episode, he called the hooker again, knowing full well what she does for a living??? What is going on in that part of Nashville? Maybe we’ll find out next week. 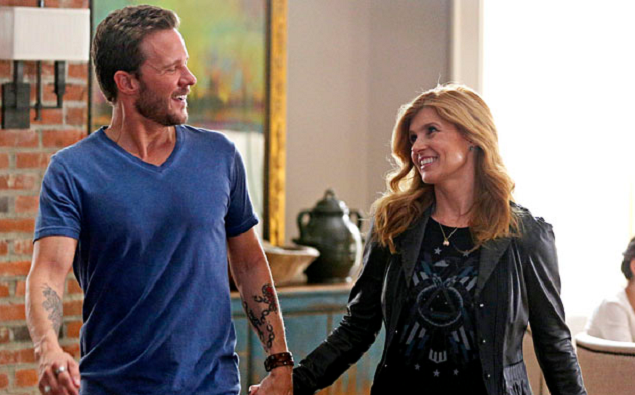