Who’s that girl? Who’s that girl? Is it the one in the middle? That’s Jess! Or are you talking about the girl in purple sarong? That’s CeCe.Grey sweater? That’s not a girl, that’s Schmidt, you dummies!

Last night’s New Girl previewed its new intro, with much less of DIY-adorkable aesthetic. Also toned down was the show’s emphasis on Jessica Day (Zooey Deschanel) in the credits for what has become one of the best ensemble shows in comedy right now.

Though I did always like that no matter how cutesy the old intro was, it showed you that New Girl was always aware of its possible saccharine content in its lead. Thus Jess is left hanging, all alone, after singing this imaginary Busby Berkeley-by-way-of-Wes Anderson tribute to herself. The men she has at her beck and call have gotten fed up and bored with her shenanigans, which is a good cue to the viewer that no, this isn’t one of those Apple commercials where Zooey’s making soup. New Girl knows: it can be a little much sometimes.

But is this new intro an improvement? Let’s test the temperature on the Internet!

Jenny Jaffe over at Vulture:

Gone are the days of the twee, modular opening that I’d gone from hating to loving to resenting for its now-conspicuous lack of Cece and Coach. In its place is a shiny new photo collage that is altogether sleeker, cooler, and more representative of the show at its best: namely, an ensemble piece that once needed Jess Day to get it on the air.

Then there’s thge rest of the Internet (ie, Twitter):

Who gave them permission to change the intro to New Girl???? Why can't we vote on real issues like this monstrosity? Get it together America

Oy. I think I come down on the side of pro-new intro. By now, we don’t need the sort of winking nod at the end of the song where Jess is left all alone to realize that the show doesn’t take the star-power of its lead that seriously. And yes, it’s turned out to be a phenomenal ensemble show built around Deschanel, but she’s hardly the main character in it anymore. This is some Friends-like equality in the cast! Two thumbs up. Now, if we could all get them dancing in a fountain and clapping… 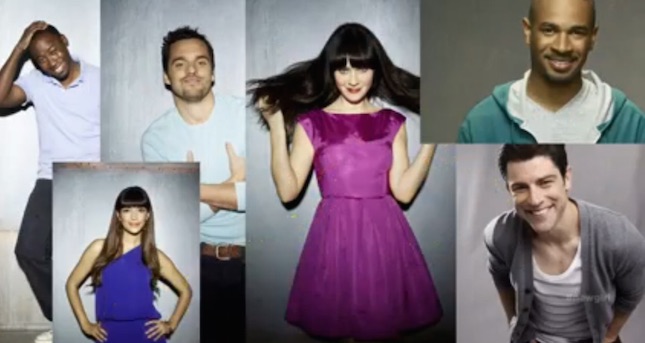