ATLANTIC CITY – Elizabeth Mayor Chris Bollwage threw his head back and laughed at the influx of people banging through the double doors on the sixth floor of Bally’s and into the Marlborough Room.

They were the 1980s teeny boppers turned 40-somethings who never suspected their eyes might glaze over at the sight of Jon Bon Jovi.

“Talk about a buzz kill,” groused one of them, buffaloed into the Bollwage food table by the procession behind her.

The straight-from the Phil Murphy-Bon Jovi event sentiment seemed to be that the power pairing didn’t exactly add up to even Jan and Dean, let alone an acoustic guitar replica of the opening power chords to Living on a Prayer.

At the jutting altar of Bally’s Arcade tonight, Bollwage, who for years has played footsy with the idea of running for governor but never taken the plunge, smilingly played the role of diehard deserted bridesmaid.

He had his own crowd as his event ran concurrently with potential 2017 guv candidate Murphy’s and Bon Jovi’s at the same hotspot. The tables were packed with the same faces that have hovered for years around Bollwage, augmented by handfuls of power players.

Both men embraced the veteran mayor and played him up as a potential statewide brand.

Prodded on the subject, Bollwage soft-shoed, then grew focused and fiery while reflecting on the November 4th Elizabeth Board of Education contest, where a super PAC called the Committee for Economic Growth and Social Justice tied to his ally, powerful state Senator Ray Lesniak (D-20 ), helped topple an 18-year administrative power structure.

“We’re going to begin dismantling their political operation and set about making the Board of Education do what it’s there for: which is educating children, not pulling entities in from around the state to feed a political machine,” said the mayor, whose two winning candidates rearranged the Board of Education away from long ruling BOE leader Rafael Fajardo and concentrated power in City Hall.

“They’ll try to retaliate,” Bollwage said, “and we’re going to be there to make sure they’re unsuccessful.”

The mayor fell into an embrace with Assemblyman John DiMaio (R-23), Hackettstown, an old friend.

Florio and Pascrell both had their brows furrowed on the subject of the embattled city that is this year’s scene-setter for the annual League of the Municipalities Conference. Atlantic City Mayor Don Guardian is the right man for the job with the right vision – how unfortunate it is that he should be in command when the state is executing a takeover, Florio said.

Both noted the difficulties presented by the distance between the Borgata and Harrahs’s and the rest of the casinos on the beach.

That was a common complaint throughout the conference.

Unsettled revelers found themselves constantly jockeying between the two points, shaking out Parkway change in frustrated attempts to pay cash-only parking fees. The cold factor contributed to general unhappiness. But then too did the overall downbeat cast of a still crime-ridden shaky city, the men noted.

They were both here believing in Atlantic City’s future, and in the complementary capacity of Northern gaming.

PolitickerNJ pointed out the presence of would-be gamers mesmerized by their own BlackBerrys, who looked more likely to walk nose first into a pillar before ever noticing the antique-looking slot machines on some of the casino floors.

Pascrell said in 18 months the clutch of AC casinos will have new, more 21st Century-friendly games that Internet age gamers will find compelling.

“The idea is to strengthen and preserve these casinos and then build on that with more destination-oriented activities,” said the lobbyist. “Atlantic City can be Brooklyn.”

Shortly thereafter, a text appeared, from an AC insider – unrelated to the conversations at Bally’s.

“Revel deal dead,” the words read. “Can’t make a deal on the cogeneration plant. Operation cost too much.”

The news didn’t sour the mood in the Marlborough Room, where Bollwage rejoiced with his local win, and the ongoing titillation that what he built politically might rival rock stars. 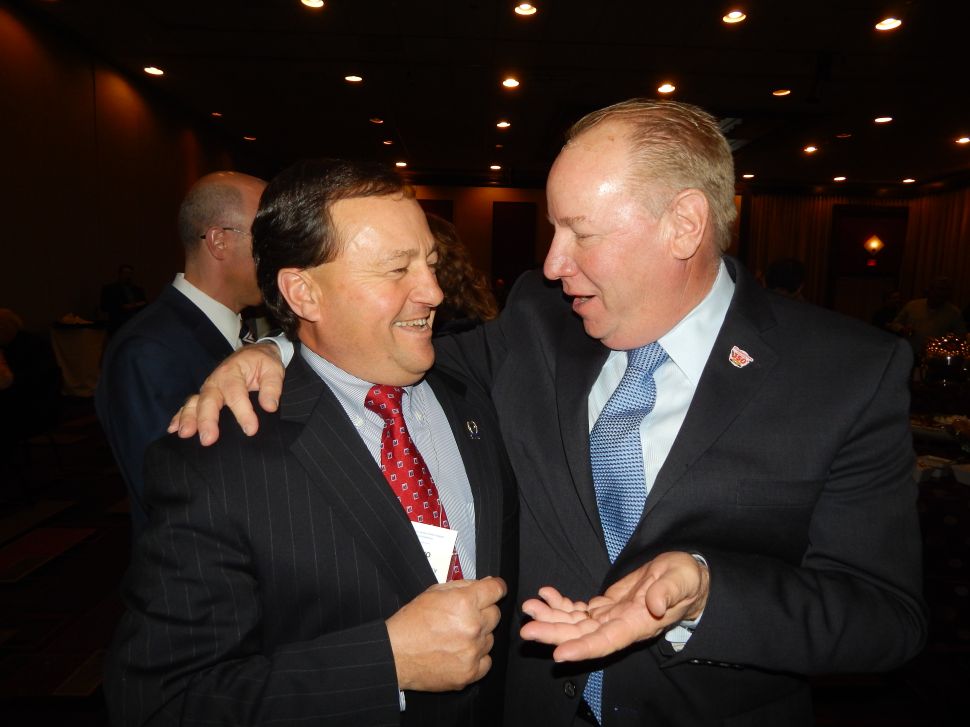