In a recent opinion piece in the Observer, Laura Adkins and Zak Kukoff claim that much is being done to defend and promote Israel at NYU. Their column focuses on the recent event I organized under the auspices of my father Rabbi Shmuley Boteach’s organization, which featured Nobel Peace Laureate Elie Wiesel, US Ambassador to the UN Samantha Power, and Harvard Professor Noah Feldman. The event was organized in response to Mahmoud Abbas’ UN address in which he attacked Israel and claimed they were waging a ‘war of Genocide.’

It is true that TorchPAC allowed me to announce my event at their debate this past Thursday. Laura Adkins is a serious Jewish activist whom I respect and hope to emulate, if not in her methods certainly in her commitment. I will give credit where credit is due.

However, Laura is living in denial of how hostile to Israel NYU has become. And why Jewish groups on campus chose not to get fully behind the event to respond to Abbas and host the greatest living Jewish personality on earth is utterly mystifying.

If you read Laura’s article, the first thing you’d see are smiling Jewish girls sitting with Israeli and American flags set neatly as their tablecloths, as if it accurately represents the local campus-scene. Israel, in this campus dream Laura goes on to depict, is well-represented. Even Mahmoud Abbas praises “Pro-Israel” groups. There’s probably a bake-sale of blue and white cookies somewhere nearby.

The unfortunate truth is that, walking about the NYU campus, you’ll see a few other things as well. In case you haven’t been to Greenwich Village in some time, there’s a guy outside the NYU campus library with a massive sign that reads “The Jews Control The Internet.” When the Jews expanded their control to ‘EVERYTHING’, he dutifully reported that fact. To be fair: he sounds crazy, looks crazy, disappears for weeks at a time, and isn’t a very big deal. Besides, it’s gotten so cold that standing outside with a sign might be punishment enough. For a second, though, let’s stop and imagine that this man had been holding a sign that criticized homosexuals or African-Americans. He probably wouldn’t be standing there for very long. And if he somehow managed to stay up there, the gay and African-American campus groups would probably be more outraged than boastful.

You might also notice that there are no Israeli scholars involved in the department of American Studies. Well that’s because the American Studies Association joined the Boycott, Divest, and Sanction movement, and cut Israel out of everything it does. Many universities cut their ties with the ASA after its decision. NYU, with the single largest Jewish student population in America, did not. Which makes sense because the ASA is headed by NYU’s Lisa Duggan and a full 25% of the ASA national board that enacted the boycott is based at NYU.

Then there’s the Students for Justice in Palestine. You’ll definitely see them. They often sit at their Boycott-Israeli-Hummus table in the NYU Center for Student Life and hold candlelight vigils for Palestinian victims every Tuesday night in Washington Square Park. This past summer they actually held a die-in (like Ferguson protesters are doing right now) and played dead on the floor to help spread awareness that ‘Palestine’ is a giant cemetery burrowed by Israeli murderers. If you’re here this coming February, they’ll hold their mega-event, “Israel-Apartheid Week,” in which they cheapen and disgrace the memory of South African suffering in order to further antagonize Israel. They’ll put up their Israel-Apartheid wall, where hundreds of people come around and perhaps post images taken from the horror film Final Destination 4 and pretend they’re photos of Gaza (that actually happened).

The truth is you don’t need to be on campus to see the SJP. This past April, they hit the big news after sliding notices under doors in two NYU dormitories, alerting the student residents that they’d be evicted much the same way Palestinians are evicted on a regular basis by their Israeli Occupiers. (We’re still waiting for a similar campaign to spread awareness for the thousands of Palestinians evicted by Egypt last month to make space for ‘Lake Rafah’). It was actually the TorchPAC leader herself explained that the two dorms chosen for the attack were known for their considerable Jewish populations. If she is to believe her own claims — that Jews were deliberately targeted by a university-sanctioned student group — then she should probably hesitate before hailing the wonders of the status quo.

To make matters worse, the SJP was neither condemned nor shut down, and a petition soon surfaced that was signed by nearly one hundred members of the NYU faculty, defending the actions of the SJP. A video covering the scandal interviewed some of these very students who were meant to be under TorchPAC’s protection. They all seemed to say the same thing. They felt unsafe. They felt threatened. They felt entirely uncomfortable.

Admit it, Laura and Zak. All is not quiet on the Lower-Manhattan Front. You are not yet the campus iron-dome you claim to be. The situation is grim, and if the European university scene can serve as our guide, it’s only going to get worse.

The only question left is this: why are we losing?

Here’s my take. TorchPAC is better organized than the SJP, and could probably hold more impressive events. They certainly have a nicer website (thank me later for the plug). But where the Pro-Israel groups fall behind is where it counts most — in pure, unbridled passion.

As it is now, Pro-Israel campus groups, including TorchPAC, seem a lot more focused on understanding the other side than confronting it. However noble, that can’t be the role of a campus group meant to counter the effect of the Anti-Israel campus coalition. The Palestinians already have the SJP, the Muslim Student’s Association, Amnesty International, the Student Labor Movement, J Street, and OXFAM America representing their side. They’ve come to own the narrative, influence countless students, and ensure that every major Israeli politician steer clear of our campus.

We need to portray our love of Israel with the same passion they exhibit in their hatred. We need to take to the streets and student papers, advertising Israel’s just and noble cause in the most visible way. Rather than entertain an already loyal crowd, we should seek to influence those students far beyond our current reach with mega-events like the one we held this past Monday night at nearby Cooper Union.

In a debate for the Washington Square News, Laura expressed the following about the Arab-Israeli conflict. “Both sides need to recognize each-other’s claims to the land.”

But at a time when Israelis are being murdered while praying in Jerusalem synagogues, it seems to this NYU student that Israel, rather than the Palestinians, needs our help. Especially from groups claiming to be pro-Israel on campus.

Mendy Boteach is a Chabad-ordained Rabbi who is an undergraduate at NYU. 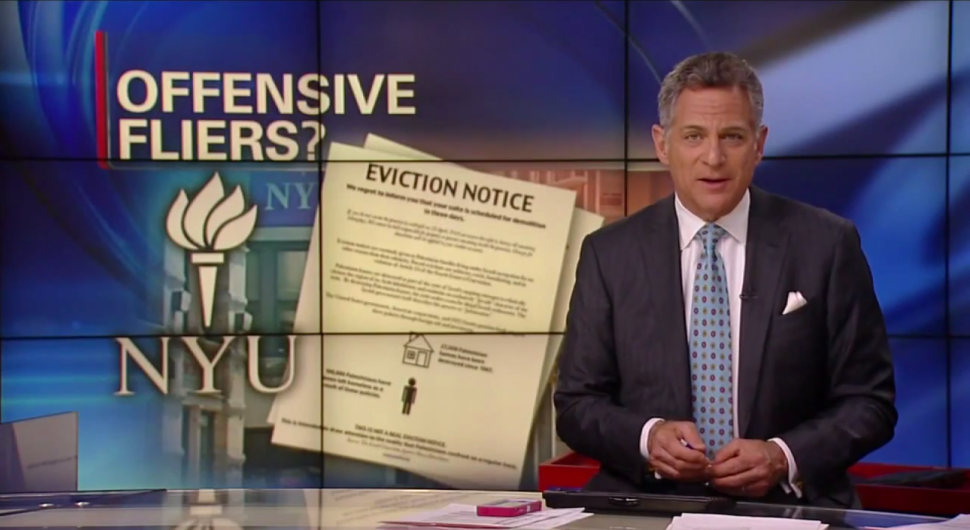