I Do and I Don’t: A History of Marriage in the Movies

Over the past century, Americans have gone to the movies to experience adventure, mystery, romance—to escape. It’s no wonder, film historian Jeanine Basinger argues, that studio executives and their marketing teams generally avoided ever directly mentioning that hallmark of American life: marriage. The marriage film, she writes, is “the genre that dare not speak its name,” typically disguised as something else. Her 10th book, I Do and I Don’t, is a wry, entertaining romp through its history and conventions.

By the end of the silent era, Ms. Basinger writes, the marriage film typically “sold a series of lies,” sending its starring couples on exotic trips or through various trials only to return them to their newly fulfilling daily existences. The studio era brought a new series of problems; seven, to be exact: money, infidelity, in-laws and children, incompatibility, class, addiction (“an addicted partner must reform, or die”) and murder.

The marriage film began declining in the 1960s, along with the institution itself, but television became a home for (family-centered) marriage stories. Still, Hollywood had a few tricks up its sleeve, focusing more on divorce and feminism, and even showing what a (somewhat) happy lesbian marriage could look like, in The Kids Are Alright (2010). The films also “went nuclear,” in the 1980s, Ms. Basinger writes, as action and marriage films bled into one another. She cites Mr. and Mrs. Smith (2005), in which Brad Pitt and Angelina Jolie play married assassins hired to kill each other. It was really about an age-old problem, she says: “They didn’t really know each other when they wed.” 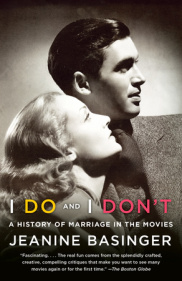