“The whole world of pain I must carry,” he translated. “I bear the unbearable, and my heart is breaking in my body. You proud heart, you wanted it so! You wanted to be happy, endlessly happy, or endlessly sick. And now, proud heart, you are sick and miserable.”

“I think there is something of that in your work,” Mr. Rosenthal declared, turning toward the artist. The audience was suddenly in stitches. “Do you kind of sense what I’m saying?”

“I do,” Mr. Kentridge replied. “And I’m very happy to take that load and to put it over there,” gesturing toward a far corner of the stage.

And that’s how an overwrought metaphor in German kicked off a discussion of moral imperative and the importance of doubt in the work of William Kentridge, South Africa’s most prominent contemporary artist. It could be said he’s currently having something of a moment here in New York: there’s a presentation of recent works on view at Marian Goodman Gallery, the U.S. premiere of Paper Music: A Ciné Concert at Carnegie Hall, and the debut of Winterreise, which features 24 animated short films by Mr. Kentridge, at Alice Tully Hall.

“The big responsibility is thinking that a moral undertaking is done in the studio, and I think that becomes very dangerous,” Mr. Kentridge said, picking up Rosenthal’s prompt. “It implies that you have a great command of knowledge and that you are going to show something that other people don’t know.”

Raised during apartheid in Johannesburg—his father was a Jewish lawyer for “the right side,” in Rosenthal’s estimation—Kentridge had limited exposure to the world of contemporary art during his formative years, and did not make his first appearance on the international scene until well after apartheid ended.

“The irony is the cultural boycott meant there was no expectation that curators from the outside, or critics, would come to South Africa,” he explained. “So I could do these animated films and these figurative drawings without the terror of the weight that the international art magazines had over young artists in the periphery.”

The inherent tension between the artist working quietly for himself, and the artist producing for an audience, he said, required the “separation of self into contesting parts: artist as maker and artist as viewer, who steps into the studio and suggests how badly the person doing it is doing it.”

“You know when you’re about to bite something and you feel your salivary glands anticipating?” he said. “It’s a little bit like that. It’s a sense of the pectoral muscles, of an impulse toward the shape, the height, the line—it’s not an exact projection, but there are marks of possible horizon lines, of images, of where the shoulder might be. And then you step back from the drawing and a second figure comes in. And that’s yourself as the viewer.”

And although he has earned global acclaim for his prints, drawings, animations, and theater and opera productions, which have been presented at respected venues around the world, Kentridge stopped to dwell upon perceived failures: he failed at keeping journals, failed as a painter, failed as an actor, and was ultimately “reduced” to being a draughtsman—where he even “failed at erasing.”

“When you draw with charcoal, and you erase it, that’s a central part of animation—doing the drawing, erasing, and redrawing—and I could never make a perfect erasure,” he said. “I tried every kind of eraser I could find, and I kept apologizing to everyone that my drawings were messy.”

His earliest works, created while the artist was studying politics and African history in South Africa, most closely resembled agitprop art, posters for trade unions and theater productions for local community organizations. Even if he was isolated, away from the art magazines and fairs and biennales and taste-making institutions—far away from the Manhattan cultural mecca of the 92nd Street Y, indeed—he used the localized tension to instill in him a sense of an artist’s purpose.

“People had been to Documenta and returned to Johannesburg with these stories of what was happening in the art world, and it seemed so very distant,” he recalled. “Politics in South Africa meant getting locked up in a police cell with electrodes on your testicles—not chatting to students under a bridge in Kassel.” 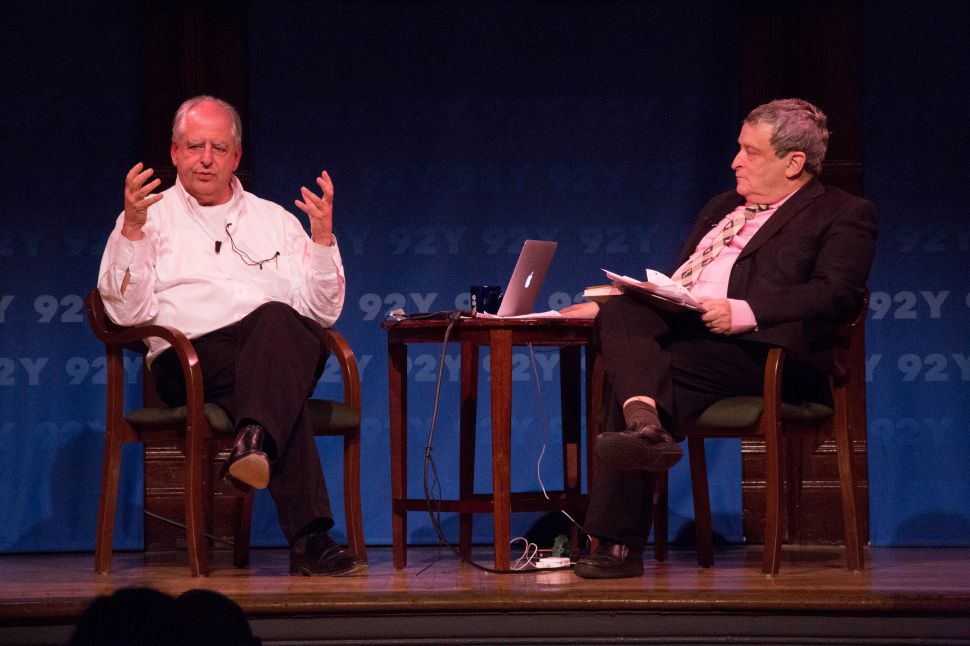