Veteran’s Day is a particularly busy day for the Metropolitan Museum of Art. Veterans, plus a guest, have free admission to the museum, where they can expect to see classic works of art, weaving their way round the Egyptian Room or Roman sculptures. Less expected–and less visually appealing–are the fifteen or more food carts parked outside of the venue, which block access to buses and taxi stands. Staking it out at the most lucrative food-cart location in the city, the vendors–many of whom are in fact veterans themselves–are in a constant turf war for the best spot that began way back in 2007.

When the competition began in earnest some seven years ago, The New York Times wrote that the spot held just two hot dog carts, who paid money to the city in permits. That all changed when Bob Rossi exercised his right as a disabled veteran, via a 19th century law, to vend on parks’ property without a costly permit fee.

Mr. Rossi unwittingly opened Pandora’s Box, and an influx of veterans and vendors soon flooded the block to cash in. Some carts, like his own, are owned and operated by veterans. Others, he claims, are part of a “rent-a-vet” scheme, where veterans obtain these permits and then sell them to third parties who operate the carts.

“It’s insulting to put the word veteran on a cart when it’s not really owned by a veteran,” Mr. Rossi told the Observer.

When asked about the veterans’ whereabouts, Mr. Rossi said they were generally across the street or getting food elsewhere. One veteran even bought a hot dog from Mr. Rossi’s cart. “They won’t even eat from the carts they supposedly own,” he said.

Mark, a veteran who asked that his full name be withheld, said that he sold his permit two years ago, via a “verbal contract.” His permit was subsequently sold, and he with it. Now his days are spent with the cart, while his nights are spent as an airplane mechanic. “I have to stay with the cart. If anything happens I have to represent as the owner of the cart. But I don’t own the cart,” he said. Mr. Rossi calls him “an indentured servant.”

The Times reported that the Department of Investigation looked into complaints regarding a “rent-a-vet” scheme in January of this year, but any attempts at regulation have been halted by a pending appeal of a New York State Supreme Court Case regarding the interpretation of the statute.

Despite the hold ups, Sheryl Neufeld, administrative law division chief of the New York City Law Department, said in a statement that, “The city continues to monitor the situation carefully and take appropriate action when necessary.”

However, until the case is decided, the area in front of the met will remain as crowded as ever. Mr. Rossi has taken to extreme measures to protect his space in the sidewalk–he sleeps in his cart every night, and plans to continue to do so through the winter. He and his daughter, Elizabeth Rossi, and two other veterans cycle through their collective carts, switching them each night to comply with health regulations. The carts by law cannot stay outside and functioning for twenty-four hours a day; they must take them away for cleaning.

Other vendors have not chosen to take such extreme measures. Nir K. Magar, an immigrant from Nepal and cook in a halal cart outside the Met, told the Observer that his cart arrives on scene around 8:30 am. He calls the feud “trouble for everyone.”

The feud is especially troublesome for the Museum. Harold Holzer, the Vice President for Public Affairs at the Met describes the ongoing situation as “an accident waiting to

happen”. The museum is concerned for the safety of its patrons, with the sidewalk, bus stops, and cab stands being blocked, not to mention the numerous propane tanks fueling the carts. Mr. Holzer says that the Museum receives at least one complaint per day.

An artist whose work hangs inside of the Met visited the Museum two weekends ago. “She had such trouble squeezing through the carts to hail a cab, that she tripped and broke her ankle,” Mr. Holzer said.

“Many visitors think that the Met doesn’t care about the situation,” he says. But the Met, like the city, is left waiting for the results of the court appeal to rule on proper enforcement of this law.Until then, the turf war continues.

Update: An original version of this story did not contain a statement from Sheryl Neufeld. 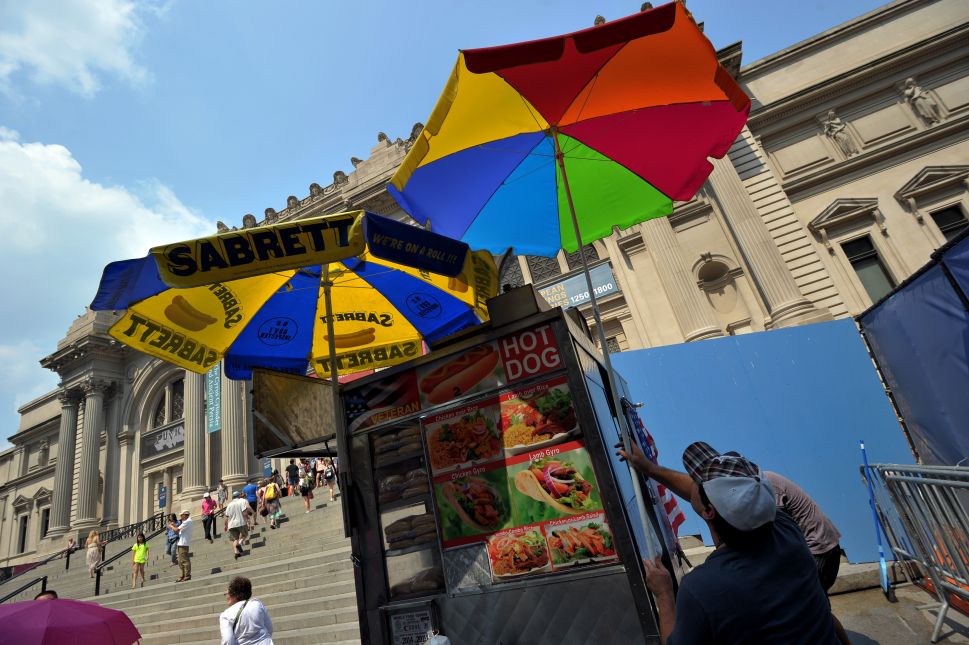