I grew up in what some might call a meat-and-potatoes home. This in no way resembles my current diet, but during my childhood, steak made its way onto the dinner table once or twice a week. With this being said, I have never actually prepared a steak myself and couldn’t even begin to tell you how to reach a pink, juicy center. So when I heard about a frying pan that makes cooking the perfect steak effortless, I had to give it a try.

Last night, I tested a prototype of a new smart kitchen device called Pantelligent, and subsequently dined on a delicious steak and salmon fillet.

“There’s a lot of people who have a desire to cook better meals at home,” Mr. Evans said. “I think there’s this sense that people have wanted a cooking robot ever since the Jetsons. In a GE commercials from the ’60s, there were machines where you put in the ingredients and a meal came out.”

The pan’s bottom is equipped with sensors that continuously take temperature readings and wirelessly send the data to the Pantelligent app via Bluetooth. The pan and the app work together to turn the temperature readings into step-by-step cooking instructions that prompt you to make even the slightest temperature adjustments to keep your food cooking at the perfect temperature.

During last night’s Pantelligent trial, my sous-chef Liz prepared a fresh salmon fillet, and I followed after with a petite sirloin. She began by going onto the app and choosing the recipe for salmon, which first asked her to indicate the thickness of the slice of fish (3/4 inches). Next, it instructed her to season the fish, light the burner and douse the pan in one teaspoon of olive oil and 1/4 tablespoon of butter.

When the pan reached the optimal 375 degrees, a SIRI-esque voice instructed her to put the salmon in the sizzling pan. Throughout the entire duration of the cooking process, the app visually tracked the pan’s temperature with a red line that rose or fell according to increases or decreases in the temperature. The visual on the iPad screen showed a green area representing the optimal temperature range, and the goal was to keep the red line in said green range. The app’s visual and voiced instructions to raise or lower the heat came with even the slightest deviation from the optimal temperature.

Moments in, the app warned her, “the heat is too high.” Less than a minute later, it was too low, and she was instructed to turn up the heat.

“It’s a little hard,” Liz said right before being instructed to flip the fillet. “I feel like I’m playing it like a game.” But overall, it wasn’t too difficult to maintain an acceptable temperature.

When she was finished, I switched over to the steak recipe, coated the pan with one tablespoon of olive oil and waited for the pan to reach the 450 degree preheat temperature. Meanwhile, I indicated how I like my steak prepared (medium rare) and the thickness of my slab of meet (7/8 inches).

Things were a little tricky with the steak. I needed to adjust the temperature almost constantly, which led to occasional plummets and sharp increases in temperature. I wasn’t sure how the steak would turn out, but it was searing nicely on the outside.

After removing the steak from the heat and letting it sit covered in aluminum foil for a few minutes, I tasted what was a pretty delectable petite sirloin. With its pink, juicy center, I might even go as far to say it was cooked almost perfectly. Liz also agreed that the pan assisted her in cooking a mean salmon fillet.

Overall, we’ll call Pantelligent a success. It’s incredibly helpful to use when cooking something where temperature is crucial, but we’re not sure it’d be as useful when cooking say, eggs or a grilled cheese sandwich — two of the 50 or so recipes currently available. Also, it’s excellent if you can give the pan your undivided attention, but it won’t live up to its potential if you’re multitasking. Our only real complaint is that the app’s interface doesn’t flip when the iPad is turned landscape. 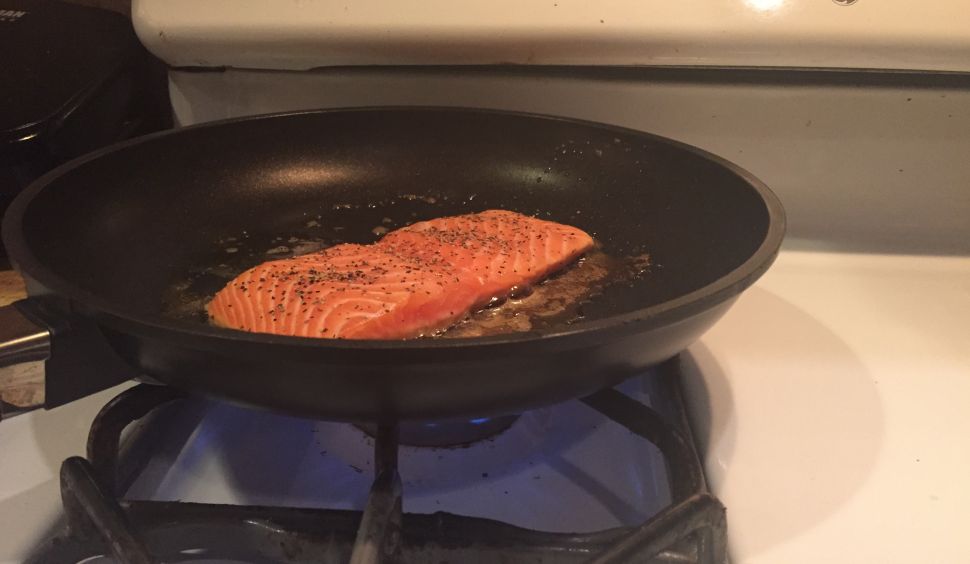