While not the strongest outing of this final season of Parenthood, this episode made several definitive statements about what it means to be an adult and take responsibility for things, whether you want to or not.

The centerpiece of this installment featured the ongoing maturation of Max, a process replete with many painfully awkward moments, particularly in his pursue of his crush, Dylan.

After Max discusses with Kristina just how to ask Dylan out on a date (in which Kristina gives the brilliant advice of, ‘I think you just have to ask’), Matt determinedly tracks down Dylan, only to find her kissing another boy, Aaron. Springing into defensive mode, Max first tells Kristina to just expel Aaron but when she doesn’t, he whips up a flyer outlining why Aaron show be sent packing. While handing it out to other kids, Aaron confronts Max and a fight ensues.

Not one to be thwarted, Max approaches Dylan in the lunchroom, and in clear view of all of her friends, embarrasses her, and himself, by presenting her with a collage that he’s painstaking made. It gets worse when Max loudly insists that he doesn’t understand why Dylan doesn’t want to be with him, mentioning that he’s taller and, he feels, better looking than Aaron. As he continues to badger Dylan about why she doesn’t reciprocate his feelings and like him at a level five on the Scale of Affection, Dylan reaches her breaking point and screams at Max, telling him that she will never, ever love him and that he needs to just leave her alone.

When Max extracts himself from the situation by running out into traffic, Kristina tries to comfort him by telling him that what he did took courage and that one day he’ll feel this way again and it will be for the right girl and that that girl will like him back. Max says nothing, but is clearly deflated.

All of this is sad for Max, but for a moment can we talk about what’s going on at that school? There’s kids kissing in the kitchen area and fighting in the hallway. No one was disciplined for any of this. This week Kristina clearly failed in her duties as an administrator.

Crosby realizes that he too is failing in his attempts to keep the Lunchonette going. When Jasmine takes a job as a file clerk in her mom’s office (at $30 an hour! Really?!), he feels emasculated by the fact that she has to step up as he is faltering in his role as family provider.

Drew, on the other hand, is desperately trying to provide some stability for Amber and her unborn child to the degree that he’s studying Economics solely for the future financial benefits he thinks will occur as a result of doing so. When Amber learns of his decision to do this for her, after Drew exclaims to her that someone has to think about her and the baby, that their mother can’t support the whole family on her own, Amber finally seems to actually realize just what Drew is giving up for her. In the end, she tells Drew not to waste time on something that he doesn’t love, that she will be the one to figure out how to handle the financial stresses of supporting herself and the baby.

(Again, does Amber really have to go to Drew’s dorm room so often? We know you two are close, but the guy is obviously really trying to focus on his studies. Maybe stop just dropping in all the time.)

Once again stressing out Hank is rebellious daughter Ruby. This time she begs her mom to let her stay home alone while Sandy goes on an overnight business trip. Sandy is skeptical but Hank says he trusts Ruby. Hank’s faith in her causes Ruby to gleefully hug him and tell him that she loves him.

Of course Ruby throws a raging party that Hank discovers when he drives by his ex-wife’s house. Upon seeing a keg and drug paraphernalia headed into the party, Hank promptly calls Sandy. She demands that he get out of the car and march into the house, but he hems and haws and says he can’t do it because Ruby told him that she loved him and he wants to keep that feeling. Sandy, clearly mad, tells Hank that once again she has to be the real parent in this relationship and handle this. She hangs up on him.

Finally, Hank pulls it together, knowing what he has to do, and stomps right up to Ruby, who’s in full party mood, complete with a red Solo cup in her hand. He tells the partygoers to get out (a bit hilariously though, calling one guy in a beanie ‘Breakfast Club’ and another dude ‘Jughead’) and then he unleashes on Ruby. She in turn announces, quite forcefully, that she hates him and storms right out of the room, leaving him to clean up.

When Sandy arrives, she and Hank have a moment on the front porch, agreeing that (shockingly!) parenting is hard.

It seems so simple to say it, but isn’t that exactly what all of this is about? While Ruby’s transition from ‘I love you’ to ‘I hate you’ within the hour might be a somewhat stalwart storyline within the parenting genre, the other storylines aren’t quite as obvious, and that’s what makes this show so appealing – the many ways that it explores the nature of not just being a parent but of truly being a grown-up and doing what you have to do to be a mature human being, even when doing so totally sucks.

In the end, Jasmine’s statement to Crosby that, yes, things are tough now, but that in the future, ‘we’ll all get our time to shine,’ is a lovely, hopeful message, but the real stellar moment comes on the heels of that when she says, simply, ‘I believe in you.’

Whether you’re a parent or a child, most times you don’t need to hear a solution to your problems from someone else. Inherently, you know what you have to do, even if you don’t want to do it. What you want to hear, need to hear, is simply that someone, anyone believes in you. Once you know that, everything seems possible.

Next week is the final episode of Parenthood for the year.  It appears that this winter finale will feature more of Joel and Julia’s struggle to define where their marriage is headed as well as the return of Sarah’s former flame, Mark, and a frightening turn for Zeek with regard to his health issues.

With only a scant four more episodes to go after next week, it seems there is just still so much story to tell when it comes to the trials and tribulations of the Braverman family. How can this ride possibly come to a satisfying end? Let’s be confident and just tell the people in charge of this show called Parenthood, ‘We believe in you,’ and leave it at that. 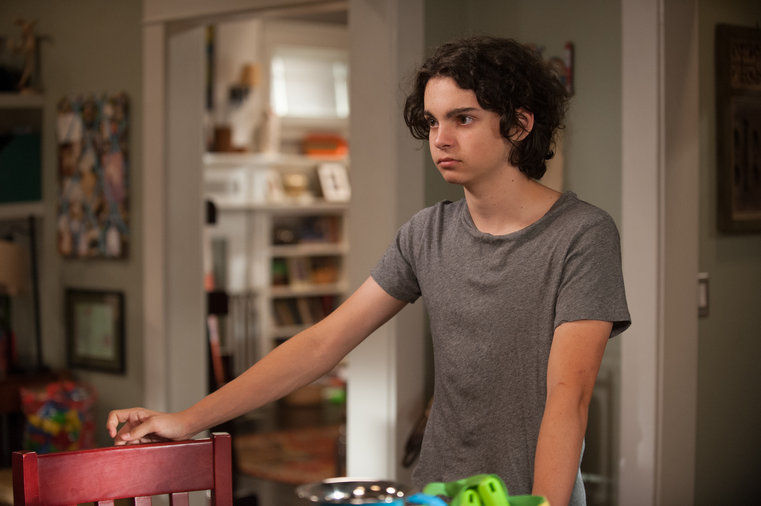