Early in this week’s episode of Parenthood, Sarah’s former Fiancé, English teacher Mark, shows up, filling in for a flu-stricken drama teacher. Standing onstage just before Ruby’s debut in the high school musical, he declares, “I know absolutely nothing about drama.” Mere moments later, he spots Sarah in the crowd and that statement truly loses all meaning.

In fact, we all know that Parenthood is always all about the drama. The drama of coupling, uncoupling and just generally coping with all things family and relationship related.

In the uncoupling department, Joel and Julia are truly in the thick of it with him pouring it on to win her back and her insisting that he just get to it and sign their divorce papers.

You have to give Joel credit for making the decision to do everything he can to convince Julia that a divorce is a mistake and using every tool in his arsenal to remind her of what they meant, and still mean, to each other.

Was it the nostalgia of his not-to-subtle choice of lunch location, which was the restaurant where they had their first date and where they went to celebrate when they first learned she was pregnant with Sydney that affected Julia? It could have been his impassioned speech about how he knew they’d become an incredible team, and they did, until their coupledom failed. It’s also possible that Julia’s fling, Chris, played a small part in helping her make some decisions when he told her that he believed she was still in love with Joel. All of these things had Julia in a tizzy, but when all else fails and you don’t know what to do, you should always ask your mom what she thinks (at least in the Braverman family you should), because Camille really knows how to get to the heart of the matter (pun intended). Very simply she tells Julia that marriage is all about forgiveness, but sadly Julia says that she isn’t sure she can forgive Joel for being weak when their marriage was tested.

But, apparently, she can.

When she storms into Joel’s apartment and demands that he sign the divorce papers, she stands strong….for a bit, and then lunges at Joel and passionately kisses him. There are no words spoken during this exchange, just what seems like some sort of desperate attempt at clinging to each other.

Speaking of desperately clinging to something, Zeek once again enlists Drew to assist him on a mystery mission. Boy, I’ll bet when Zeek gave him that car Drew had no idea that he’d have to be driving his Grandpa around on a regular basis, not that Drew minds, because he’s a good kid, but once again, there’s a family member in Drew’s dorm room distracting him from his studies. Usually it’s clueless Amber, but now it’s Zeek, asking Drew to help him plan a surprise trip to France with Camille.

Concerned about Zeek’s health, Drew practically runs to Camille to tattle on Zeek and tell her about his crazy idea.

At first, Zeek is livid when Camille confronts him about what he’s doing, but when she says that they can plan the trip together for a time only slightly in the future, when his ability to travel is a bit more secure, Zeek’s excitement about the endeavor is renewed.

Down at Chambers Academy, things go awry when Kristina very wrongly insists that Max and Dylan present a project together for the school’s open house. In a moment that anyone, well, anyone other than Kristina apparently, could see coming, Max acts aggressively toward Dylan, loudly questioning her about why she doesn’t like him and grabbing at her to the point where she has to pry herself from his clutch. After extricating herself from Max’s grasp, Dylan yells at Kristina about how wrong she was in insisting on the Max/Dylan presentation partnership. This, of course, was in front of several parents, including Dylan’s until-now-never-seen mother and father.

The whole incident leads Dylan’s parents to declare that they’re going to make her change schools and, rightfully so, causes Adam and Kristina to have a talk with Max about what happens when two people want different things in their relationship.

For reasons not exactly clear, given her struggles with Max, Dylan pleads with Kristina to talk to her parents and convince them to let her stay at Chambers, which Kristina successfully does. Dylan’s parents don’t seem convinced that this is a good idea until Max forcefully says that if they let Dylan stay, he’ll keep away from her, far away from her. Dylan’s folks agree to let her remain at Chambers, at least until the end of the semester.

In the coupling department, just when it looks like the Sandy, Sarah, Hank triangle is working out, the aforementioned Mark shows up. Sandy, who finds him hot, is quite surprised to learn that Mark is Sarah’s former betrothed, but to her credit she makes no snide remarks. Hank, who is all too aware that not so long ago Sarah chose him over Mark, quietly worries what this means for he and Sarah, but in a very mature move he allows the two to have alone time to talk.

When they do connect, Mark genuinely seems interested in Sarah’s happiness. This may be because he’s got his own reason to be blissful; he and his wife are expecting their first child. True to form, upon hearing this news Sarah’s slightly-heart-broken-but-desperately-trying-to-feign-glee expression says it all; she cared for this man deeply and while she’s moved on, it still hurts that they couldn’t make it work.

Later, when Hank opens the discussion about the current status of his relationship with Sarah, he points out that he has a volatile wife, a crazed teenaged daughter and that he himself is weird. He admits that he knows Sarah isn’t going back to Mark but he wants to know if this is really where she wants to be at this point in her life. Before she can answer in that moment, the volatile wife and crazed teenager burst in. Later, after Sandy has scuttled out and Ruby is in her room, Sarah simply takes Hank’s hand in hers and tells him that she’s happy and right where she wants to be.

When all was said and done, this episode was spot in depicting all of its variations on the theme of coupling and uncoupling. The most important statement being that both parties have to truly be in it for it to work, and even then, it sure as hell isn’t easy.

This sentiment is extremely clear in the final moments of the episode, when Zeek, at 3am, a stricken look on his face, whispers to Camille, beside him in bed, that he can’t move. She grabs the phone and presumably dials 9-1-1.

This last bit of narrative might have been shocking had NBC not spoiled the moment by including the scene it in their promo for this episode.

Having seen the promo, I spent the whole episode knowing what was coming and it really took away from Zeek and Camille’s storyline.

Personally, I think it’s a cheap cop out to use the last scene of any show in the promo and this has been a continuing pattern when promoting Parenthood.

As a former promotion producer (full disclosure), I know exactly how hard it can be to craft a spot that entices viewers without giving too much away, but to just use the final dramatic moment every week is, in my opinion, lazy. On the bright side, at least they didn’t include the Joel/Julia kiss in the promo so that was a genuine surprise.

Let’s hope there are many of those genuine surprises in the final four episodes of the series….and that they aren’t all ruined ahead of time by the promotion department.

This episode was the winter finale for Parenthood. The show will return from hiatus on Thursday, January 8th. 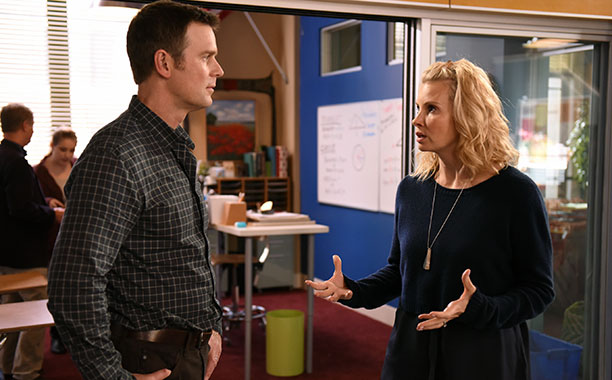