TRENTON – In the face of a potential looming primary challenge in 2015, Assemblywoman Eliana Pintor Marin (D-29) seemed nonplussed on Thursday on the Assembly chamber floor in Trenton and looked to focus on her job.

“I feel fine because that’s not something I’m concentrating on right now. I’m trying to pass some good legislation and serve the needs of my community and my state,” said Pintor Marin, 34, of Newark, who has served in the Assembly since 2013. “We’re going to have another budget battle, and the state is not in very good [fiscal] standing. There is a lot of work to do.”

Sources have told PolitickerNJ that increased fundraising efforts by Newark Mayor Ras Baraka and his allies indicate that a primary fight might be looming in LD 29 against Pintor Marin and L. Grace Spencer. The Democratic LD 29 assemblywomen would reportedly be challenged by Alturrick Kenney and Patrick Council, sources stated.

Whatever moves Pintor Marin may have made in the past, she said she was ready for whatever comes next year.

“In my arsenal, I have my record. I was committed when I was a school board member 1,000 percent,” said Pintor Marin, referring to her time on the Newark school advisory board from 2008 until earlier this year. “I’ve demonstrated how to work with a lot of different types of people in challenging times. As a first-year legislator, I’m trying to pave my own way and concentrate on what’s going to benefit my district. As we get closer [to the 2015 election], we’ll have to see where we all stand.” 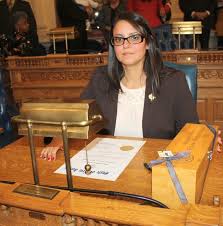