Having helped re-elect Kristin Corrado the clerk of Passaic County on Tuesday, the arch-enemy of Assemblyman Scott Rumana (R-40) is making moves toward positioning Corrado for a GOP Primary against Rumana next year, sources say.

Rumana fended off Murphy in 2012 when he positioned his county chairman’s candidate, John Traier, for victory over the Murphy-backed Scott Heck.

But those wounds are unhealed apparently, and Corrado now stands poised to – at the very least – pressure Rumana.

Sources close to the assemblyman say he is unruffled by Murphy’s plotting and trusts in his ability to win the lines in the four counties in his district and make a case about how Murphy’s strength is derived in part from deal-making with Democrats – the kiss of death in a GOP Primary.

Sources close to Murphy, however, are emboldened by Corrado’s win, argue that Rumana and Traier are too soft on Dems, and want to parlay the clerk’s success into future victories. 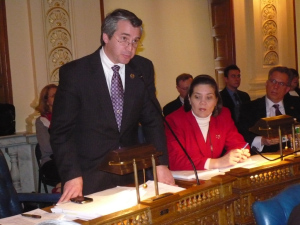